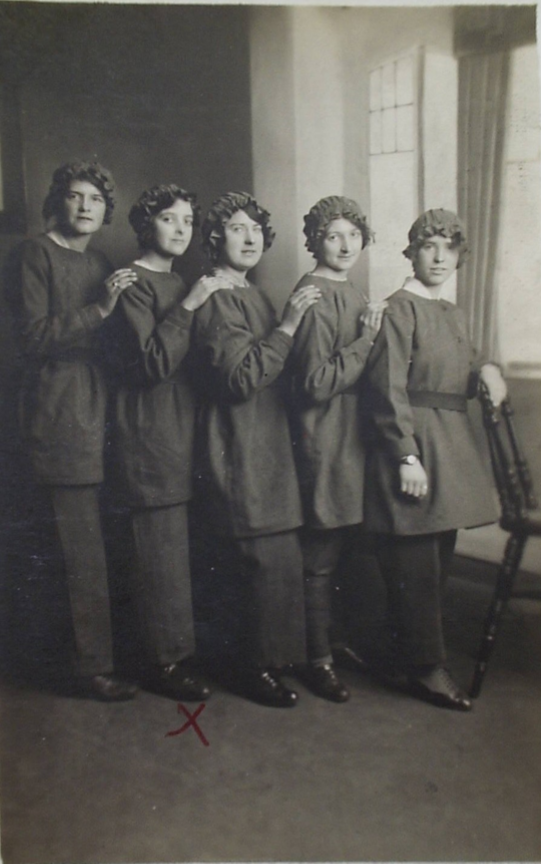 The Devil’s Porridge Museum currently has a display in Gretna Gateway Outlet Village.  One of the exhibitions on display is called ‘The War is Over!’ and focuses on what happened at HM Factory Gretna on November 11th 1918.  This is the third in our series of posts looking at this theme, if you’d like to see the whole exhibition (and our exhibition on Animals in War) then do drop in and see us at Gretna Gateway. 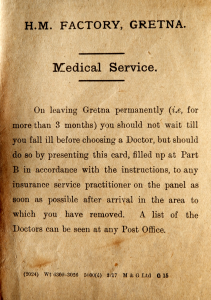 A card issued to workers on leaving work at the Factory warning of possible long term ill health.

There were 30,000 workers at HM Factory Gretna in World War One.

A number of accidental deaths occurred at the Factory.  The official government figure was seven killed but the Devil’s Porridge Museum has uncovered at least 12 named fatalities directly attributable to working in the Factory.

Jonathan Leah died on January 4th 1918 in an accident with acid.

Arthur Gilliam died when working on an acid tank, he was overcome by noxious fumes.

Robert Bickerstaffe died after his arm was caught in a pulley.

The following people died as a result of falls from height:

8th December 1916 , there was an explosion at the cordite drying factory.  One person died instantly, six were badly burned and the record mentions that some people later died of their wounds.  We do not know their names. 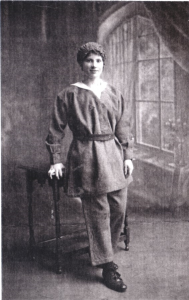 Did the ‘Gretna Girls’ suffer ill health after the War?

Many of the young women who worked at HM Factory Gretna seem to have lived out normal lives with no recorded ill effects of their time at the Factory.

We know of three women who lost their lives at HM Factory Gretna in industrial accidents (listed above).  300 women munition workers lost their lives during the War but no-one knows how many died after the War as a result of their experiences. 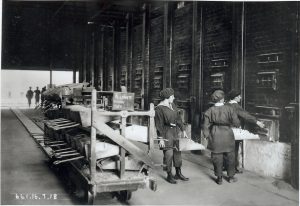 Fire, explosions and working with chemicals presented daily dangers to the Gretna Girls.

Other Gretna girls suffered injuries that would effect them for the rest of their lives such as Agnes Gardiner  who was just 17 years old when she lost her arm in an accident at the Factory or Margaret Hall who lost two fingers from her left hand in 1917.

There are recorded cases of women who suffered ill health in the years after they left Gretna.

Alice Morton always had a yellow tinge to her skin which became more noticeable as she got older.  The skin around the eyes and the white of her eyes was where it was most prominent.

Ellen Stamper nee Cleminson, suffered from lung problems after working in the Factory and died of emphysema aged 65 in 1955.

Margaret Jane Sutherland died long after the War as a consequence of inhaling poisonous fumes during her days in at the Factory. 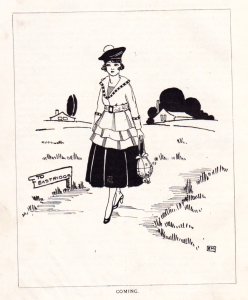 A cartoon (drawn by someone who worked in the Factory) showing a young woman arriving to work at HM Factory Gretna. 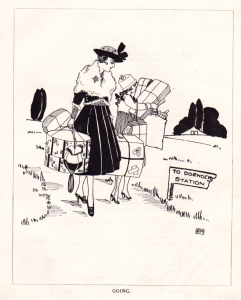 The same girl leaves the Factory years later. The implication of this image is that she has grown rich from her work and frittered all the money away on trifles.

What did the Gretna Girls do after the War?

We don’t know the fate of every young woman who worked at the Factory but we do know some of them.  This is mainly due to their families visiting the Museum and sharing their accounts and memories.

….12 got married after the War

….the others worked in factories, as domestic servants or as nannies or children’s nurses.

….6 stayed nearby (one in Eastriggs, many in Carlisle).

….9 moved (for example they moved to Edinburgh, Glasgow, Paisley, Dundee or even as far as Canada).

…3 returned home (for example to Keswick and to the Isle of Man). 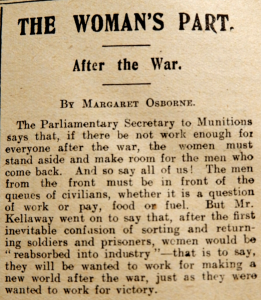 A newspaper article discussing what will happen to the women who worked in munitions when the War was over.

We don’t know how the women who worked in the Factory felt at the end of the War.  There were dances and celebrations but it must have been a sad time too with brothers, husbands and friends lost in the conflict.  There was great uncertainty about the future especially for women.  They had done so much to help achieve victory but for a long time their efforts went largely unnoticed and unrewarded.  We will remember them. 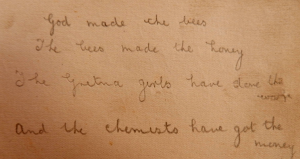 Page from an autograph book in the Museum collection probably written by a ‘Gretna Girl’. It says: God made the bees, the bees made the honey. The Gretna Girls have done the work and the chemists have got the money,

You can read the previous two articles here: https://www.devilsporridge.org.uk/gretna-after-the-armistice