Full name of worker at H.M. Factory Gretna (and any other names they are known by) : Alexander Moodie

Childhood: Lived with his parents (father often away at sea) at Kirkcaldy until he was 15. Signed on as an apprentice seaman to Willis & Son in London and was assigned to the Cutty Sark on which he sailed 1 return voyage to China in 1871.

Parent’s occupations: Father was a master mariner and the first captain of the Cutty Sark on which he made 3 round trips to China. Mother did not have paid employment.

Schools / universities attended and years of attendance: Presumably schooled in Kirkcaldy and did not attend further education.

Occupation: Seaman, rising to Master Mariner. Then from about 1910 an Innkeeper in St John Road, Creetown, Kirkcudbrightshire and, from 1918, a mechanic in Dumfries.

Place of residence at Gretna: Lived at 3 Douglas Terrace, Dumfries during his presumed employment in the factory.

Job title at Gretna: Unknown – may have been supervising 200 women. Described in the valuation rolls as a mechanic.

Travels: Apart from his trip to China aboard the Cutty Sark he appears to have given up long distance travel in order to marry in 1899. Worked as a licenced Trinity pilot out of Methill, Fife until he retired from the Sea in about 1905.

Awards/recognitions: Obtained his certificates as a Second Mate, First Mate and Master between 1878 and 1883.

Further links, notes, and comments: At this stage it is not possible to confirm that Alexander worked at H M Factory, Gretna but it is possible to confirm that he lived in Dumfries from 1917 -1931 and was described in 1917 as a Sea Captain and from then on as a mechanic. The article in the unknown newspaper suggests he invented numerous items that helped with the war effort. Further research clearly required.

Email from John ( volunteer with a local heritage society, Save Wemyss Ancient Caves Society (SWACS)) on his research into Alexander: SWACS absorbed, and inherited a lot of archival material from, other now defunct organisations including the Wemyss Environmental Education Centre, which in 1991 published a booklet entitled Captain Moodie and the Cutty Sark, written by Hugh Ward, a relative of Moodie’s. George Moodie was born and brought up in the Wemyss, hence the local interest. I was able to track down Hugh Ward, living in Freuchie, a village close to me in Auchtermuchty (where Moodie lived for the last dozen years of his life), and we formed the idea of writing an updated edition of his booklet. This became a wider project for SWACS, focussing on the centenary in 2023 of George Moodie’s death. There are now four strands to this project: 1) the booklet; 2) a small mobile museum exhibition which could tour various locations associated with Moodie and the Cutty Sark; 3) information boards at the harbour in West Wemyss, his birthplace; and 4) a permanent online archive of Moodie/Cutty Sark material, including our genealogical research.

When Hugh Ward was writing his 1991 booklet he had the benefit of access to material collected by George Oswald Moodie, Captain George’s great-grandson, Alexander’s grandson, and in fact met him when he visited Scotland from Canada in 1978. George Oswald, now deceased, had a sister, Grace, who was an avid family researcher working at the Mormon Temple in Phoenix, Arizona, with ready access to that organisation’s International Genealogical Index (IGI), a great research resource, although in my experience sometimes inaccurate. A lot of my initial knowledge of Alexander Moodie stems from the material collected by George Oswald Moodie and his sister Grace.

One item, from which I extracted the quotation about Alexander’s munitions factory experience , is the typewritten transcript of an article from an unidentified newspaper with the headline “Fife Man’s Adventurous Life”. I have searched the British Newspaper Archive for the original article without success. The problem with the transcript is that it is very faint, but I am sending you a scan of it for what you can make of it. Sometime I will have to take the time to re-transcribe it myself. By the way, there are some errors of fact at the end of the article due, I suspect, to confusion by the reporter. 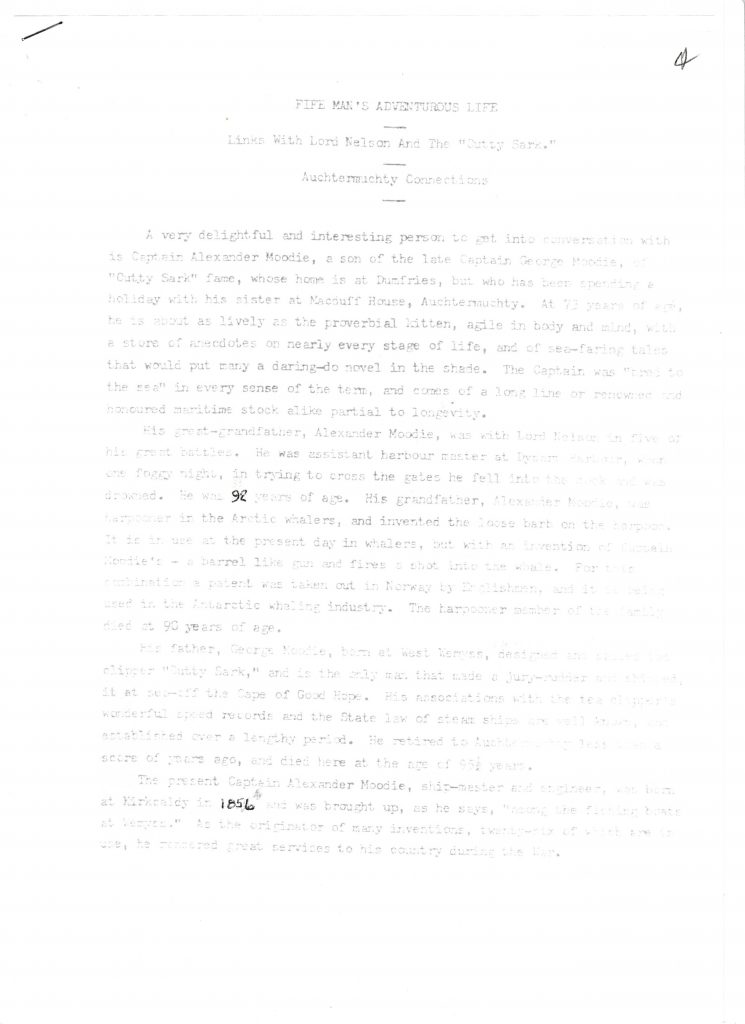 Image of article about Alexander Moodie’s life, kindly shared with the museum.

Recently, a Moodie relative in Australia sent me the attached photograph of the Moodie family taken in Glasgow in 1883, including the 27 year old Alexander. Again the quality is very poor, but it’s the only photo of Alexander I have ever seen. 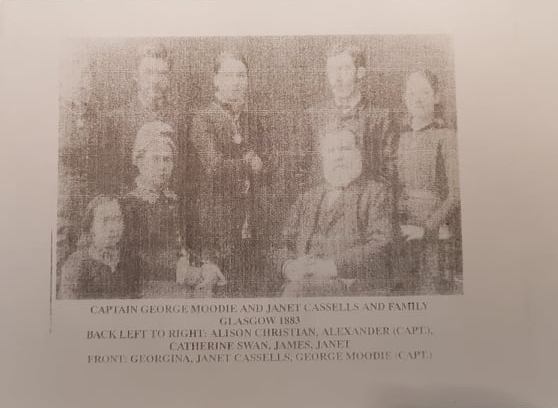 Photo of the Moodie family, kindly shared with the museum