Full name of worker at H.M. Factory Gretna (and any other names they are known by) : Denis O’Connor 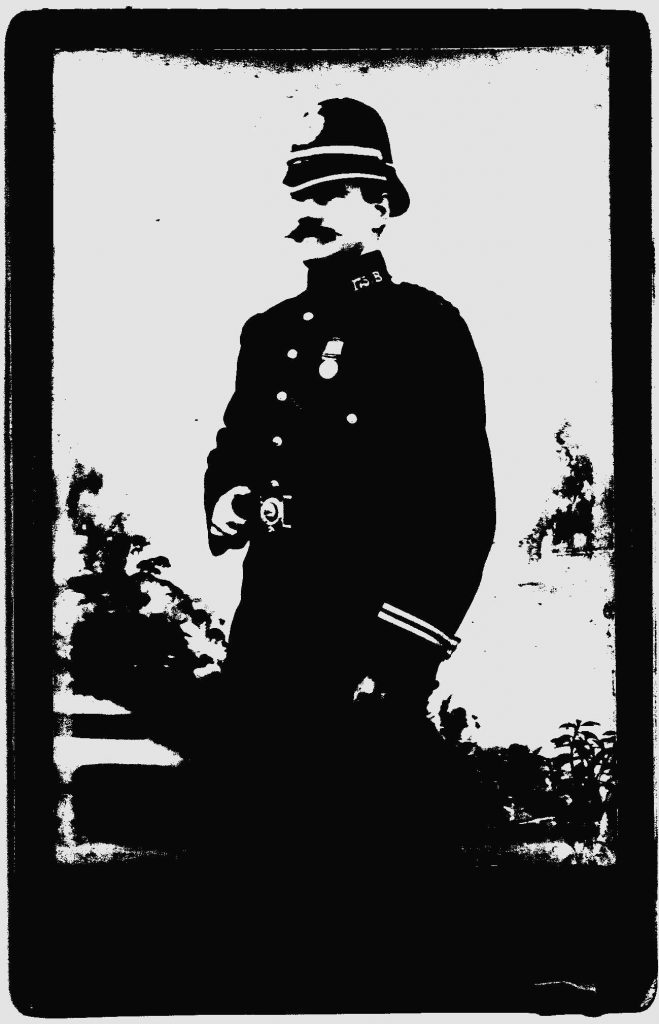 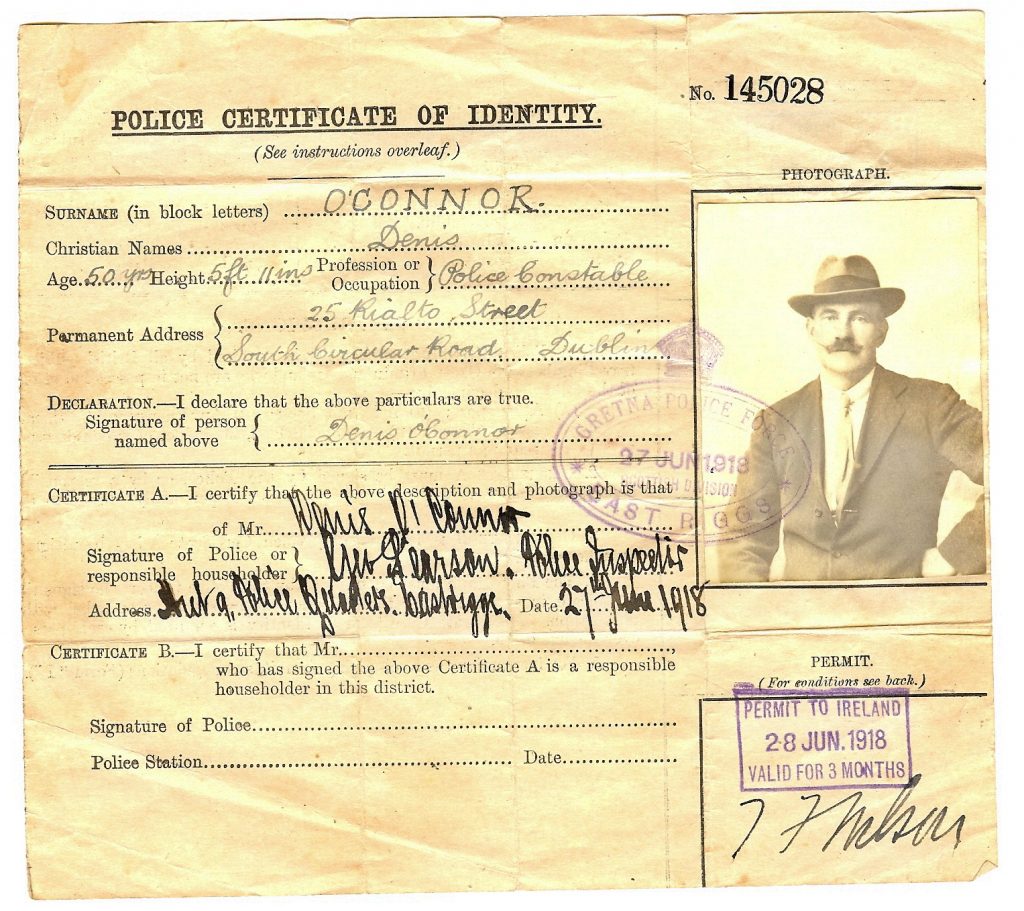 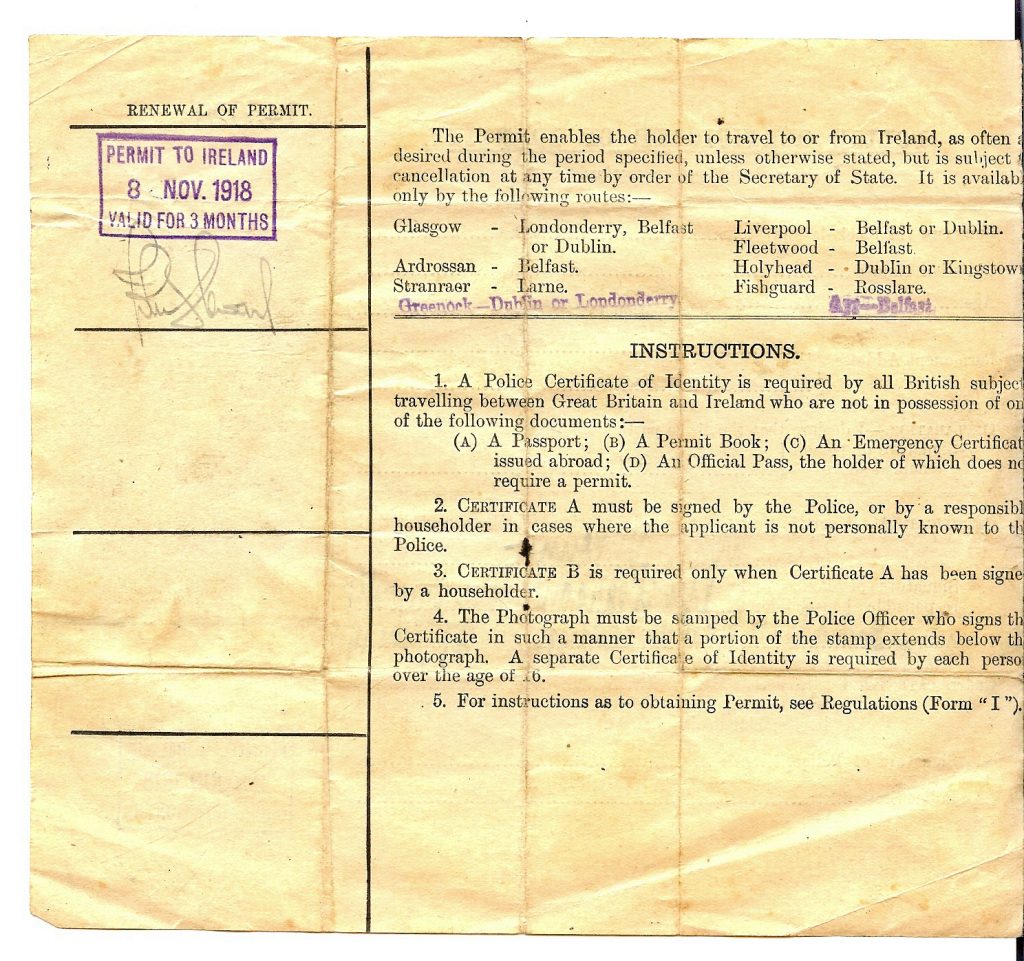 Trivia / any other information: Died from Spanish Influenza

Denis O’Connor was born in Ireland and served with the police force at HM Gretna. He died at the Gretna Hospital in November 1918, a victim of the Spanish influenza pandemic.

He was born in the parish of Currans in County Kerry in Ireland on the 14th November 1867, the son of Jeremiah and Mary O’Connor (1).

He is recorded as having worked for two and a half years as an attendant at a lunatic asylum from 1888. This may have been at the District Asylum in Killarney. Denis then joined the Dublin Metropolitan Police on 10th April 1891, aged 23. He served as a constable in Dublin police’s “A” Division to 1893, “B” Division until 1905, “A” Division again in 1906, “C” Division to 1913, and then back to “A” Division. Denis is pensioned out of the Dublin Metropolitan Police on the 7th July 1916(2). 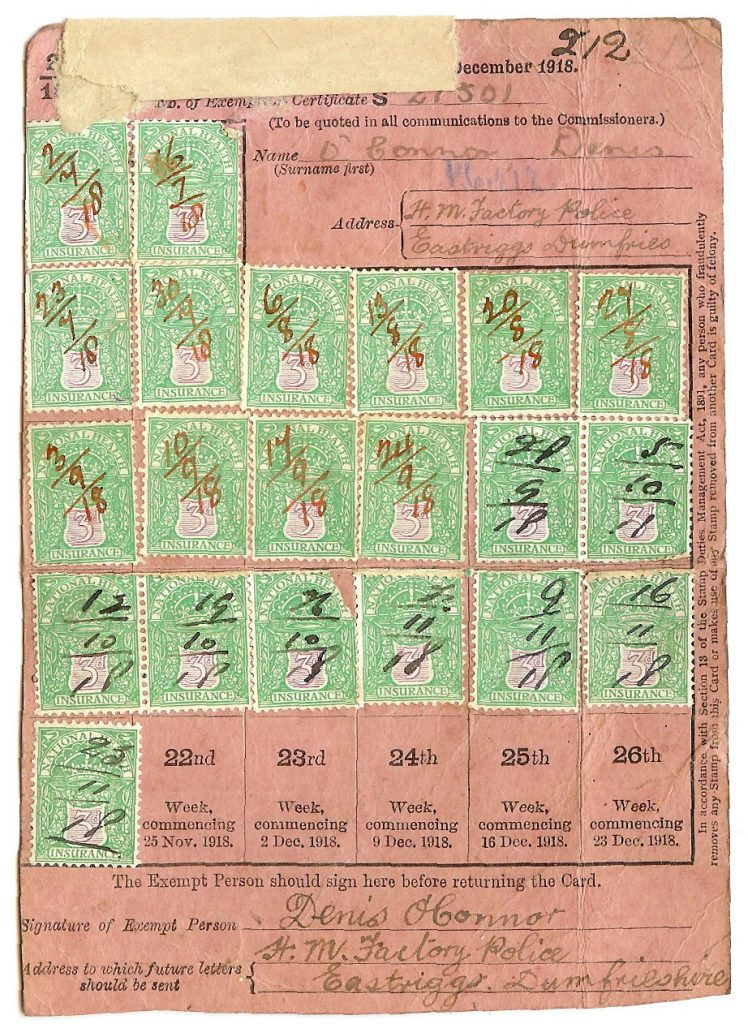 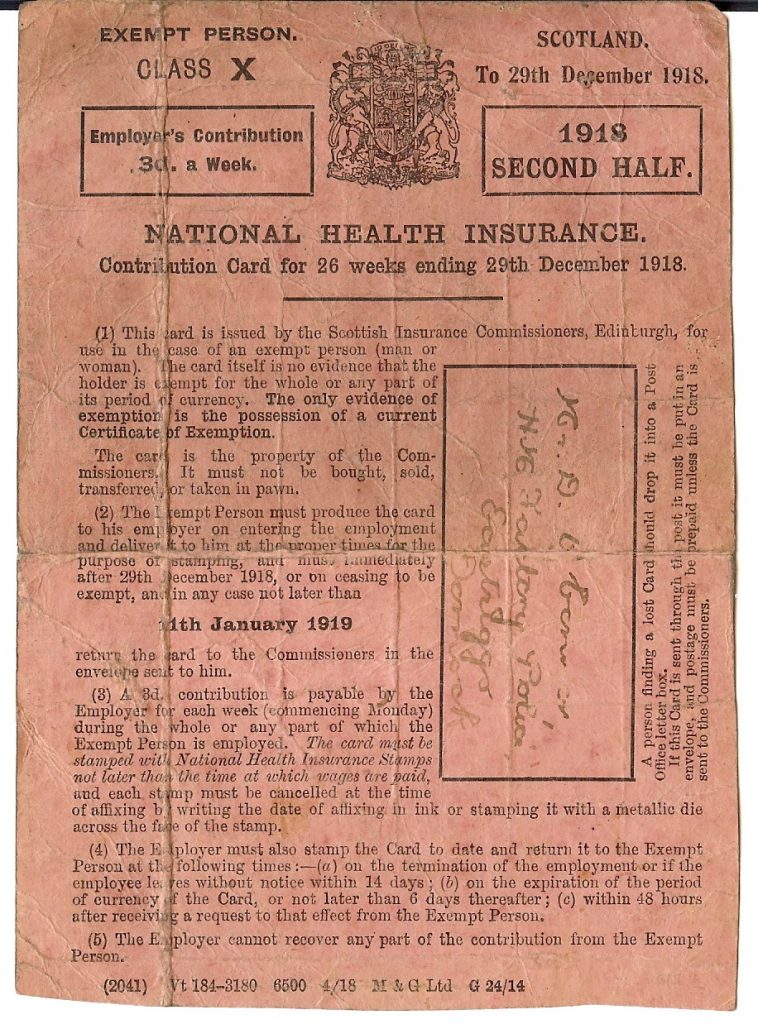 He had married Jane English on the 18th February 1909 in Dublin. However, they already had two daughters together, Eileen born in 1903, and Mary “May” Alexandra born in 1904. At the time of their marriage, Jane is living at Rialto Street, South Circular Road in Dublin. Denis is living at 54, Summer Hill in Dublin. On the 1911 census, Jane and the girls are living at Rialto Street, with her brother. Denis is living elsewhere. His long career and service in the Dublin police might explain his absences from the family home. A family photograph of Denis shows him in full uniform and wearing a medal, which may be his long service medal.

By 1918, Denis is serving as PC 2121 in the Gretna Police Force based at Eastriggs Barracks. He is 50 years old. In his probate record in January 1919, he is described as being a Police pensioner.

Denis’ family have donated a series of his personal documents to the Museum. These include his National Insurance contributions card, a police identity certificate and his funeral and grave records. 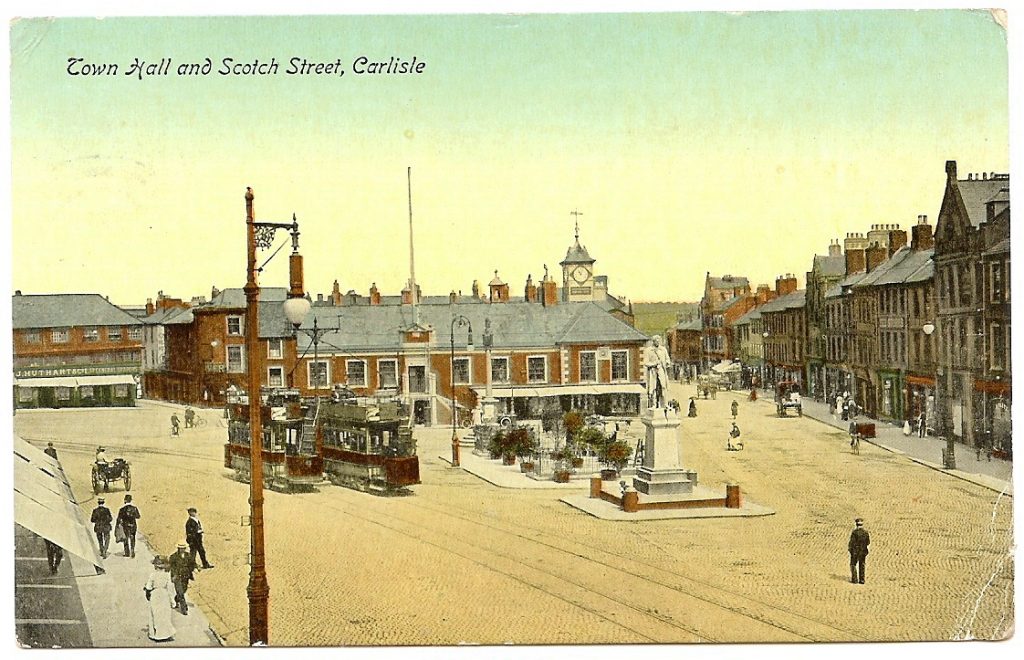 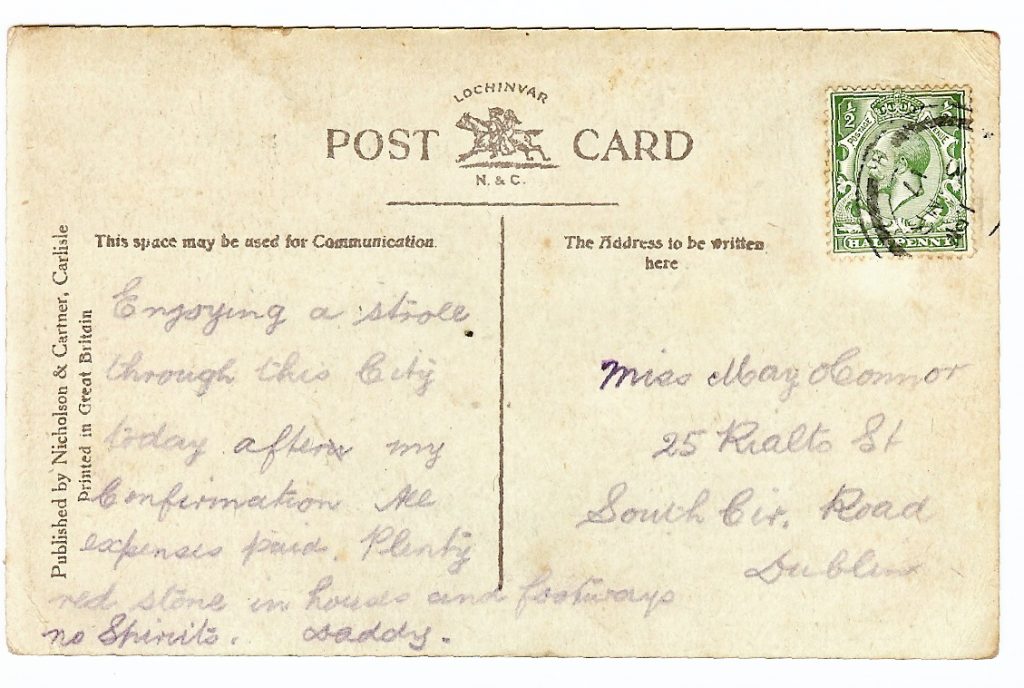 Postcard of Carlisle sent by Denis whilst at the factory

The Police Identity Certificate is a document issued by the police at this time to authorise travel to Ireland at a time of political unrest. The permit seems to indicate that Denis travelled to Ireland between June and September 1918, and that he again travelled to, or intended to travel to, Ireland in November.

The National Insurance Act 1911 created a national system of insurance to protect working people against loss of income due to sickness or unemployment. The weekly contributions were for workers 4d, for their employers 3d and the government contributed 2d. These contributions were recorded by a stamp on a contributions card. The final stamp on Denis’ card is the 23rd November 1918, three days before his death.

Denis died on the 26th November 1918 at the Gretna Hospital from the Spanish Flu. The Spanish influenza pandemic of 1918 to 1920 is regarded as having killed some 20 to 50 million people worldwide. It became known as Spanish Flu during the War because reports of deaths from combatant countries were censored for morale purposes, while reports from neutral Spain were not. 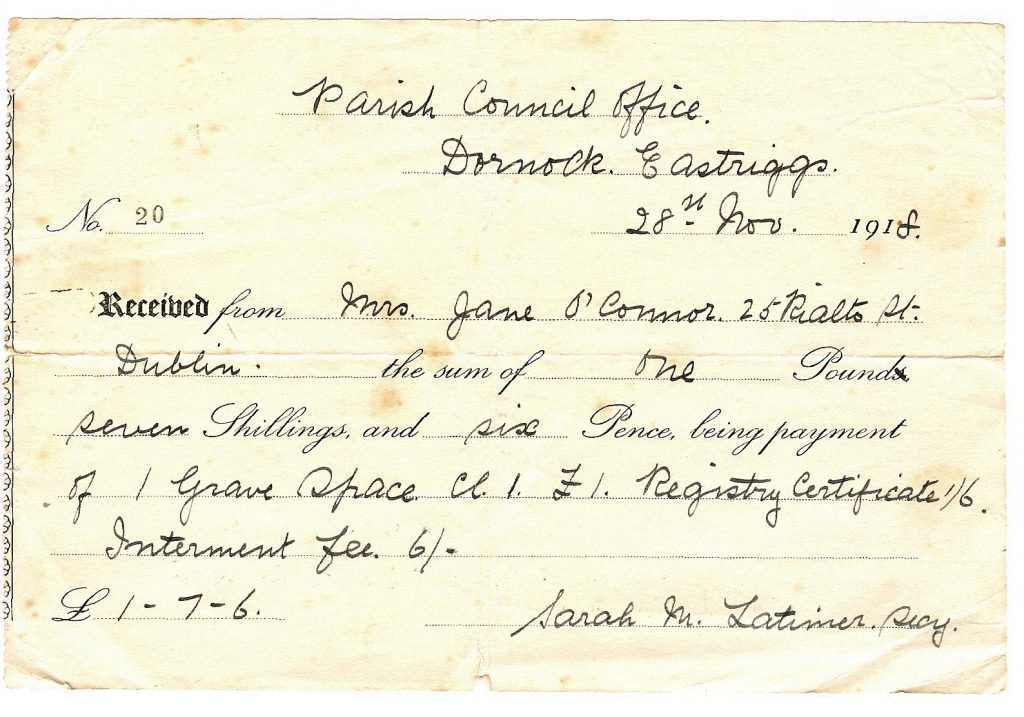 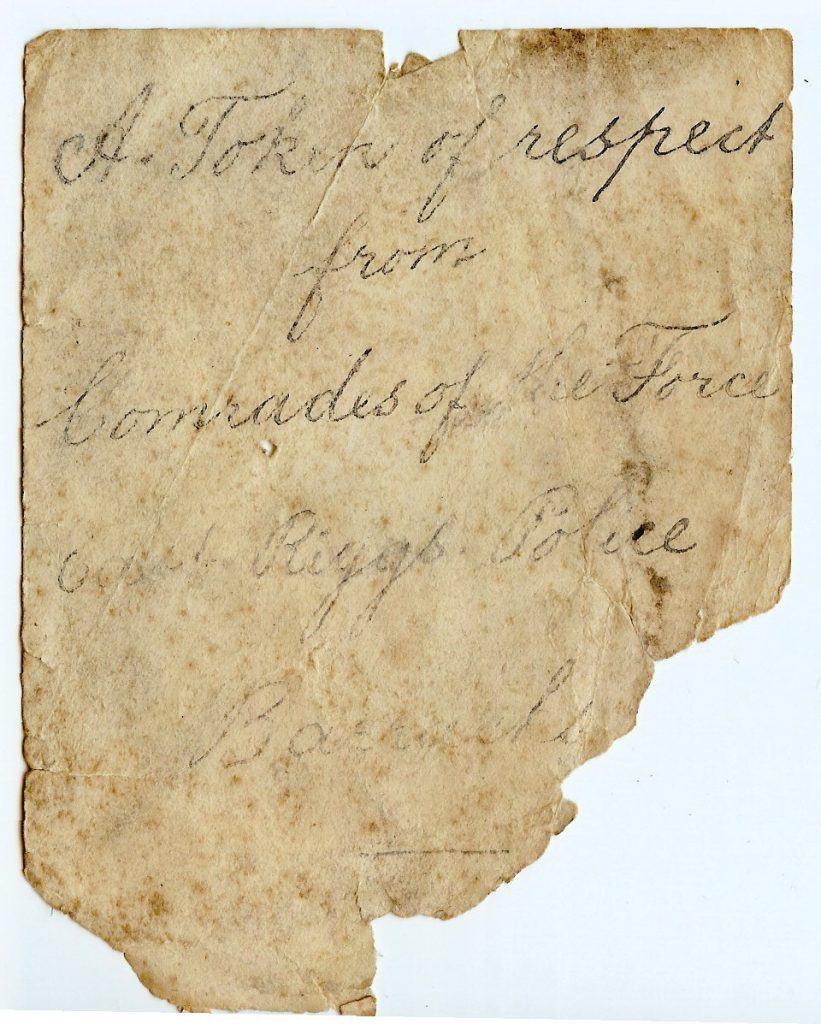 Denis was buried at Dornock Cemetery in section 65, grave 1, on the 28th November 1918. The receipt, for that date, for the cost of his grave plot is made out to his wife Jane, who is still living in Dublin. So presumably she would have been present when he died.