Full name of worker at H.M. Factory Gretna (and any other names they are known by): Edward George Voss.

Childhood: Was brought up in Melcombe Regis. 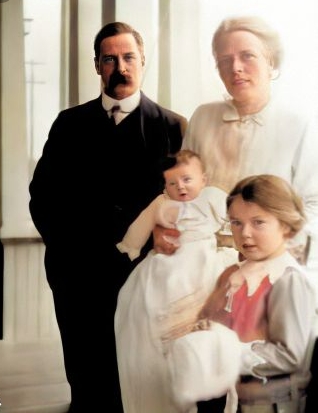 Edward and his family

Edward George Voss was brought up for the most part in Melcombe Regis at the home of his grandmother Jane S Pegg and boarded at Weymouth College before moving on to University of London. On 8 April 1905 he married Ida Julia Broad and later that same year he took a job lecturing at the General Engineering College, London. Ida died suddenly on 18 August 1909 Edward Voss, however, remarried within a few months. This was to Mona Willingham Richardson one of three sisters well known in Amersham as the ‘Richardson sisters’. The eldest Josephine was an academic lecturing in literature while Caroline was an established painter in watercolour. A family legend states that while the sisters were touring in the Alps, Mona announced that she was going to climb a mountain she had just seen from the train window. Alighting at the next station Mona proceeded to ascend the mountain and it was at the summit that she met Edward Voss.

The couple were married on 30 December 1909 had a daughter, Elizabeth Willingham Voss, born on 18 November 1910. In 1911 Edward traveled to Canada with a view to farming in Baynes British Columbia and the following year Mona and Elizabeth joined him but by 1913 the Voss family had moved on to Alberta, Canada. The couple’s second child John was born in Calgary in 1915, in a hut in the back woods, according to one family source. Edward did numerous jobs including prospecting and as an analytical chemist. This skill set led him to take a post with the Mexican Eagle Oil Company so while the rest of the family struggled with the Canadian winter; Edward was in Mexico working as a superintendent at the Mexican Eagle Oil Company’s refinery in Tampico. The Eagle Oil Company was founded by Weetman Pearson in 1909 and despite the Mexican Revolution removing Eagle’s civil engineering contracts, the company still had prospecting rights in numerous Mexican states and continued to be successful.

Several other oil producers were interested in acquiring Eagle but the UK government imposed restrictions preventing Pearson from transferring ownership for the duration of the war. Edward Voss, it seems, was attempting to join US military and a draft card was registered in New Orleans. Eagle stepped in arranging a posting to Gretna to avoid the US draft and retain their employee. Mona and children returned to UK arriving in Liverpool from Montreal on 17 November 1916 but there is no record of Edward’s journey to Scotland. He resided with his family in Gretna at 19 Victory Avenue, and worked as a factory chemist at either the Eastriggs or Mossband sections. Edward it seemed worked at Gretna for about 20 months until the middle of 1918 where he managed to gain leave to return to work at Eagle Oil, perhaps on a temporary basis. On 3 August 1918 Voss left Liverpool for New York and from there made his way to the Mexican border. By the autumn moves were also made to sell the Company to Royal Dutch Shell and the sale went through on 2 April 1919. Edward continued to work for the new subsidiary for the next 18 months but seems to have returned to England on 29 November 1920. The Voss family settled at the Rose Cottage at Amersham and then later their own home Ridgecroft on 46 Kings Road in Berkhamstead, Hertfordshire where Edward became a schoolmaster. In 1935 his daughter, Elizabeth Voss started a magazine The Amateur Musician and in 1938 she married one of the paper’s regular contributors, the musician Edgar Hubert Hunt. Edward Voss, however, died suddenly, on 13 March 1939 at his Berkhamstead home. On Edward’s death Mona returned to Amersham living at Rose Cottage, Chesham Bois and died at Junipers Bois Lane, Chesham Bois, on 25 June 1962.