Full name of worker at H.M. Factory Gretna (and any other names they are known by): Elizabeth Muriel Grace Eastaugh , maiden name Nicholson

Childhood:  Elizabeth was born and lived in Newark, Nottingham, and had three siblings:- Eleanor born 1875 (4)

Travels: In 1909 Elizabeth sailed on the “Tongariro” to New Zealand . She was accompanying her Aunt Margaret and Uncle John Prior who had been on holiday in Britain. They arrived in Wellington 15/12/1909 (5) (6).

After marrying in New Zealand, they moved to Australia where her husband was Professor of Engineering and Metallurgy at Sydney University. (5)

Frederick sailed to Britain where he served with the Australian Munitions Team at H.M.Factory, Gretna. He was a manager of section and was occupied in the various stages of gun-cotton drying, dehydration and solvent recovery. (7)

Elizabeth sailed on the “Corinthic” to join him in November 1916, with her two children, Edward and Betty. (6)

They returned to Australia after the war and were residing in Alexander Street, Hunters Hill, Sydney, at the time of Elizabeth’s death in 1959 (1) 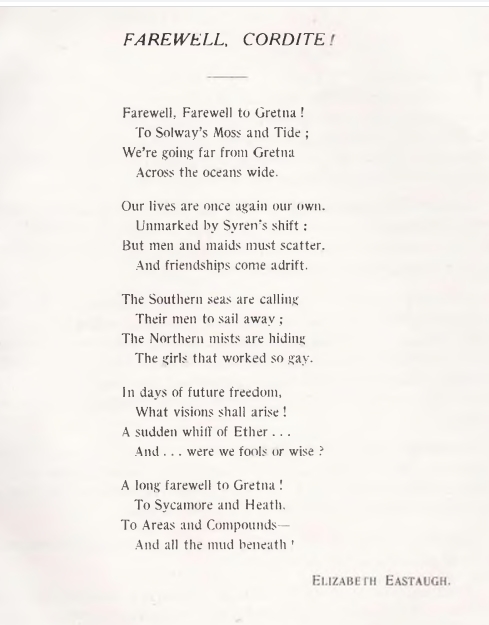 Elizabeth Eastaugh wrote a poem that appeared in the Dornock Farewell, in the archive collection of The Devil’s Porridge Museum.