Full name of worker at H.M. Factory Gretna (and any other names they are known by) : Eric de Clermont.

Parent’s occupations: 1901 Eric appeared on Census return aged 20, he was listed as a student.  At that time, his family were living in Reigate.  His father, Otto (48) was listed as a Mechanical Engineer and his sister, Helen (22) as a School Teacher.  His cousin, Kenneth Heilgers (19) was also staying with them and he was recorded as an East India merchant on the census.

In the 1911 census, his mother’s occupation is recorded as Private Means.

Place of residence at Gretna: Victory Avenue, Gretna which was Eric’s address when he died. In his eulogy it also says that he lived at Staff-Quarters, Sarkbridge, and at 96 Victory Avenue.

Job title at Gretna: Eric de Clermont joined the Ministry of Munitions and after his preliminary training at Pitsea near Basildon, he came to HM Factory Gretna in July 1916. Was given an appointment as chemist in the Cordite factory at Gretna and afterwards as Section Manager, which he held till death.

Travels: Some time after 1903 Eric travelled to South Africa to work in mining. 1916 Eric returned to Britain.

Awards/recognitions: Eulogy written for Eric in the Mossband Farewell Magazine by W. G. Emmett p. 31 and 32. 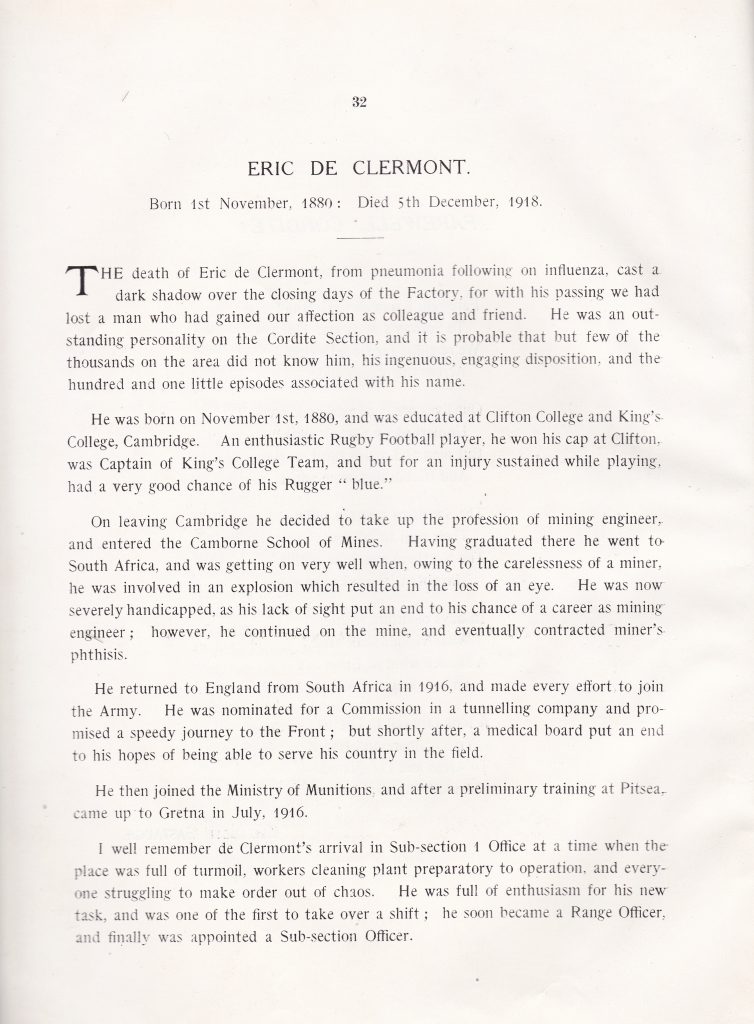 Obituary of Eric De Clermont in the Mossband Farewell, part of the archive collection at The Devil’s Porridge Museum 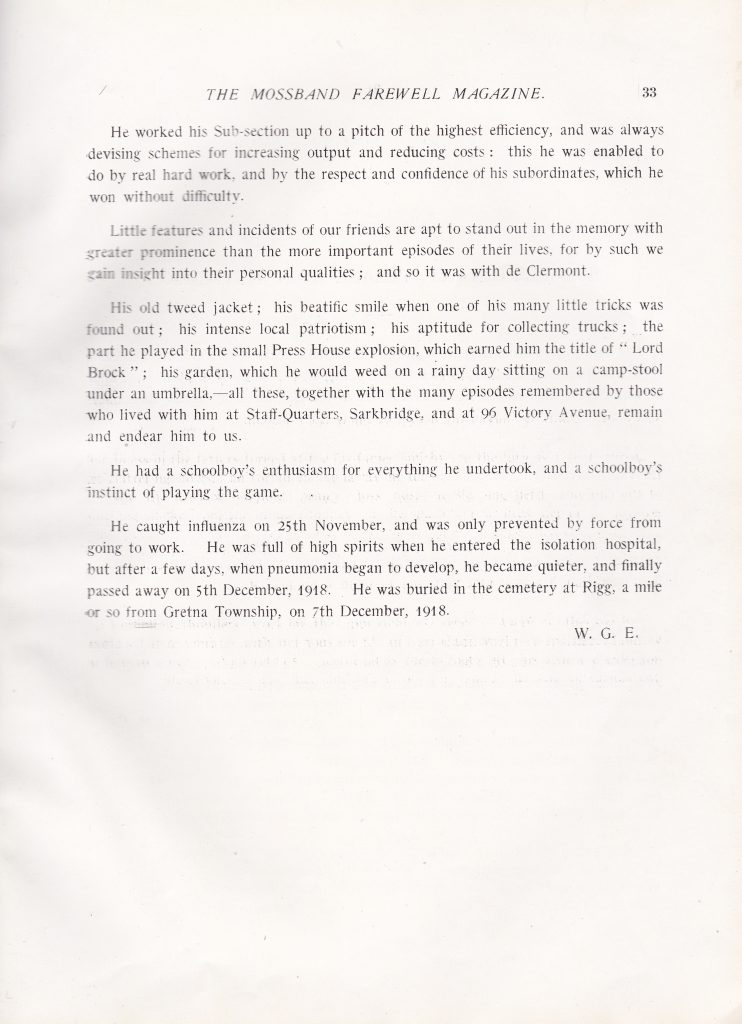 Accidents and ill health meant that Eric couldn’t volunteer for the army.

He had been an enthusiastic rugby player, even captaining his team at King’s College Cambridge before an injury.

He lost his eye and contracted miner’s phthisis (a lung disease) whilst he was working in the South African mines.

In 1916, he was nominated for a Commission in a tunnelling company and promised he would be sent quickly to the Front but his injuries and ill health put a stop to that.

The Death of Eric de Clermont

On November 25th 1918, Eric was taken ill with influenza (the Spanish Flu).  He had to be prevented (by force) from going to work at the Factory.

He was said to have been full of high spirits when he entered the influenza hospital. But after a few days, pneumonia began to develop and he became quieter and finally passed away on December 5th 1918 aged 38. He was buried at Rigg Cemetery on December 7th 1918.

There are a number of quotes about him in Mossband Farewell Magazine.

In the 1911 census for Eric’s parents, it states that his father, (Phillip) Otto, was born in Germany, but he became a naturalised British Subject in 1875.

In the National Probate Index, it is recorded that Eric died intestate. The value of his estate was £150 6s, 10d, and this was received by Mabel Brown or De Clermont of 46 Bertram Street, South Shields.