We are lucky to have a photo of her from the Mossband Farewell magazine, and to have a piece of her own writing. Miss Catnach quotes from Hilaire Belloc – ‘that there is nothing in life worth the winning but “laughter and the love of friends”’. This was where the research began, with her home address provided in the magazine of 33 Grosvenor Place, Newcastle-on-Tyne. This address was key to revealing her first name (Florence) and very much more about her family and later life.

Florence’s father, who was born in Gateshead, was the secretary of the Northern Counties Building Society. They lived in the Jesmond area of Newcastle and Charles was a pillar of Newcastle society. In 1915, the Newcastle Daily Journal features an article about him as a ‘Notability of the North,’ referring to his enthusiasm and ability in his role as Chairman of the Committee of the Royal Victoria School for the Blind, his membership of the Building Society’s Executive in London, and as a prominent trustee of the Jesmond Wesleyan Church. 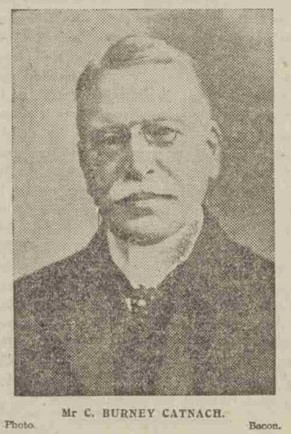 Florence’s mother, Elizabeth Jane Catnach (nee Mackay) was born in Newcastle.  Florence was the second child of their seven children. She had an older sister Annie, three younger sisters; Margaret, Gertrude and Agnes, and then two younger brothers; Thomas Burney and Charles Burney. So the two boys were the ‘babies’ of the family.

The tragedies and triumphs of the Catnach family

Florence’s older sister, Annie Halligey, was widowed by 1907 at the age of 30, with a young child just under two years of age. In the 1911 census, Annie and her five-year old daughter Dora Elizabeth are living in the Catnach family home. 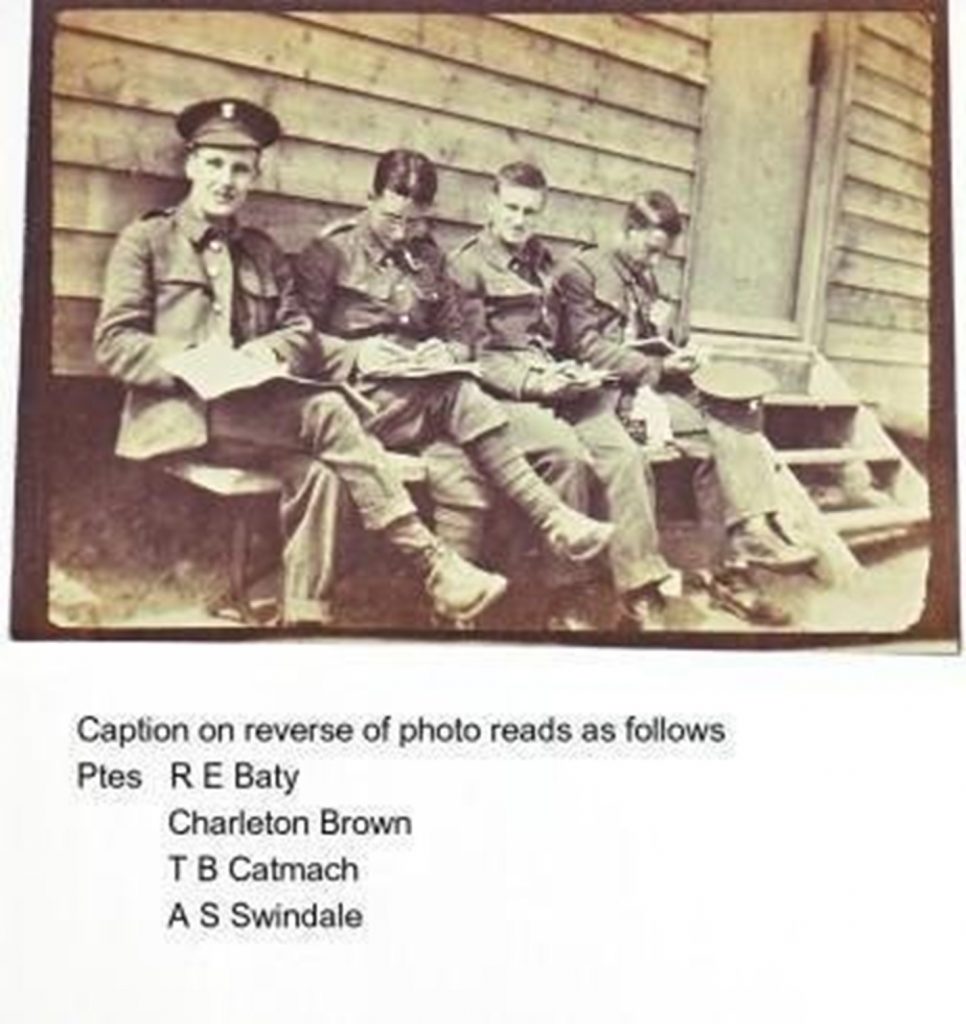 Tragically, he “died of wounds” on 19 April 1917 age 23 and is buried in France. In April 1917, the 26th (Tyneside Irish) Bn. was engaged in the First Battle of the Scarpe, around Arras, Feuchy and Monchy le Preux, which is likely to be where Thomas received his fatal wounds. Florence would have suffered this bereavement while working at Mossband.

Son of Charles Burney Catnach and Elizabeth Jane, his wife, of 33, Grosvenor Place, Newcastle-on-Tyne. Native of

Florence’s younger sister Agnes Catnach BA, who was described on entry to Holloway College, University of London as having “a rather silly manner – giggles – but not a bad sort” forged a highly distinguished career as a headmistress, was president of the Headmistresses Association, was sent by the British Council to Australia for eight months, was appointed by the Minister of Education to the Burnham Committee and the Nursing Council, awarded the CBE in 1952, and there is a lovely photograph of her in the National Portrait Gallery collection. 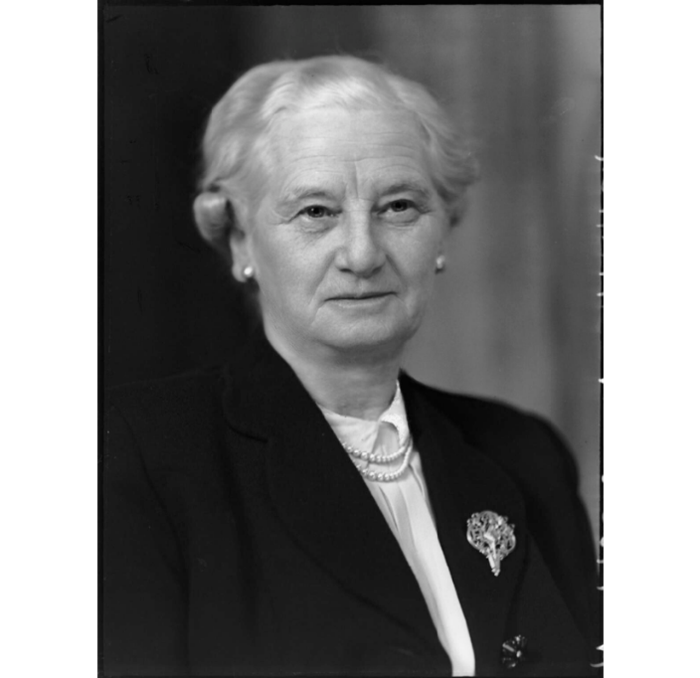 Agnes came to be described as “a leading British educationist.” 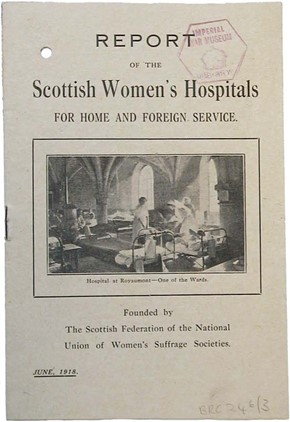 A cause that Florence’s mother donated towards: detail from the Report of Scottish Women’s Hospitals for Home and Foreign Service. Imperial War Museum, Department of Printed Books: Women’s Work Collection. Ref: BRCS 24.6/3 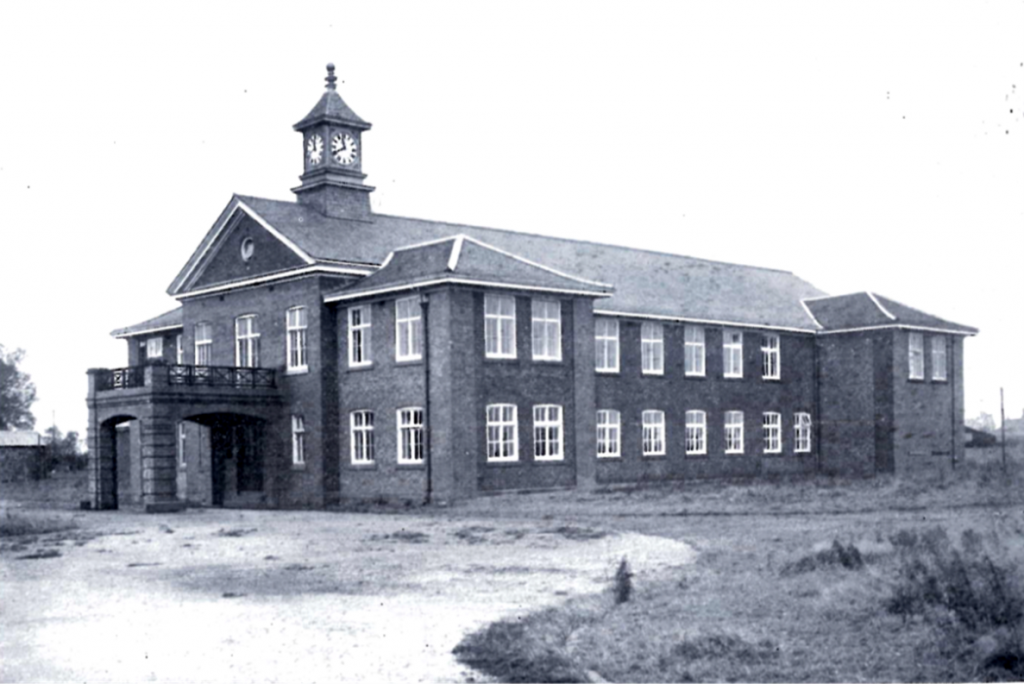 The Central Offices, Mossband, where Florence would have worked

As Chief Supervisor at the Mossband site, Florence’s work is well documented in the Factory Manual. At the time that the manual was written, welfare work was newly recognised and seen as an ‘elastic term.’ The unique situation at the munitions factory was that, having been built in the countryside, thousands of girls would have to be brought in from all parts of the country, and would need to be housed in purpose-built townships, resulting in a duty of care for both the factory hours and also their home lives.

The supervision of girl workers would fall to “educated, trained women” in a Women’s Department at Gretna, for the role of attending to all of the details of the care of women operatives. This was seen as an important business section of the factory, being in constant touch with factory officials, the Wages Offices, the Employment Exchange, the Catering Department and also the Town Management.

Florence’s role fell within the factory supervision section of the Welfare Department, which had a Chief Assistant and then a Chief Supervisor for each of the Dornock and Mossband sites. As Chief Supervisor at Mossband, Florence was responsible for 30 shift supervisors, matrons and sub-storekeepers: a 3-shift system operated (7am-4pm, 3pm-11pm, 10pm-8am), with each shift engaging as many as 500-600 girls. The factory had up to 11,000 women operatives. Florence would be in close touch with her colleague, the Chief Supervisor at Dornock, which had a smaller arrangement than Mossband, consisting of 19 rather than 30 shift supervisors.

Florence needed to be in constant touch with her 30 shift supervisors and the work of the compounds, receiving daily reports about the numbers of girls on shifts, the number of absentees, the number of sick girls, girls admitted to and leaving the factory, changes of address, and requisitions for danger clothing and cleaning materials. In turn, Florence would send in a weekly report to the Chief Assistant, highlighting any matters needing attention. Monthly statements were issued about the issue of factory clothing and cleaning materials. It was the shift supervisors who had direct contact with the working girls, expected to have “an intimate knowledge of every girl under her control and should be regarded by the girls as their counsellor and friend.”

Florence’s work therefore sat between the personal welfare of the girls via her shift supervisors and the practical logistics of staffing and equipping the smooth running of the factory at the Mossband site. This was a responsible position for a young lady in her mid-thirties. Socialising between girls and management staff was encouraged through shift dances, concerts, plays and football: meetings said to be on “a very friendly footing.”

To the chocolate factory

Florence lived in Birmingham for at least 17 years between 1922 and 1939. Most of that time she was living in Bournville at St George’s Court, which provided homes for single professional women in Bournville. 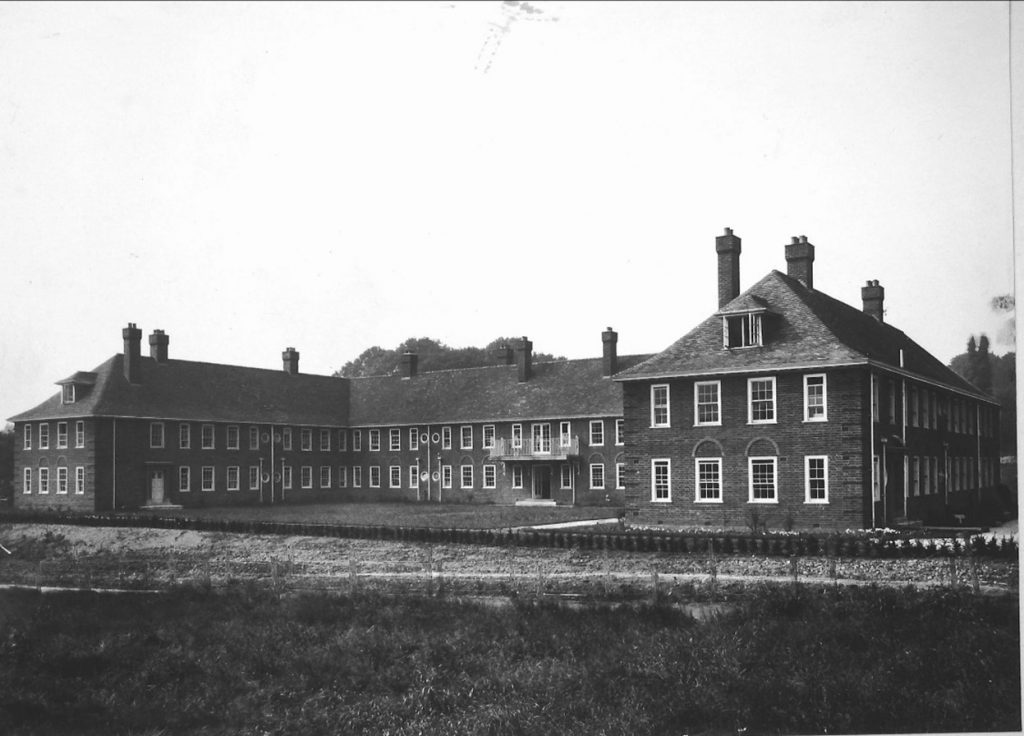 Bournville was created by George Cadbury as part of the Garden City Movement to relieve overcrowding and poor living conditions in Birmingham, becoming a model village and remaining so to this day. There are interesting similarities with the design of the townships for the Munitions Factory and the involvement of the Garden City architect Raymond Unwin and the lesser-known Garden City pioneer Courtney Crickmer as resident architect at Gretna; perhaps the community feel of Bournville felt very familiar to Florence after her intense experience at Mossband?

Florence was working at Cadbury’s chocolate factory, with records revealing her work as a Food Factory Official, Welfare Superintendent and, by 1939 (when Florence was 57), Personnel Manager, girls office, chocolate manufacturing. While at Cadburys, Florence was secretary of the Birmingham Branch of the Institute of Industrial Welfare Workers, which later became the Chartered Institute of Personnel and Development.

Florence sailed from Liverpool to New York on 17 April 1928 on the White Star line Celtic ship, returning over a month later from Montreal, Quebec to Liverpool on 22 May 1928 on the White Star line Laurentic ship. Her travelling companion was Phyllis Bruce Muscott, who also worked at Cadburys. It’s not known whether this was a trip for business or pleasure, although Phyllis repeated the same journey ten years later. 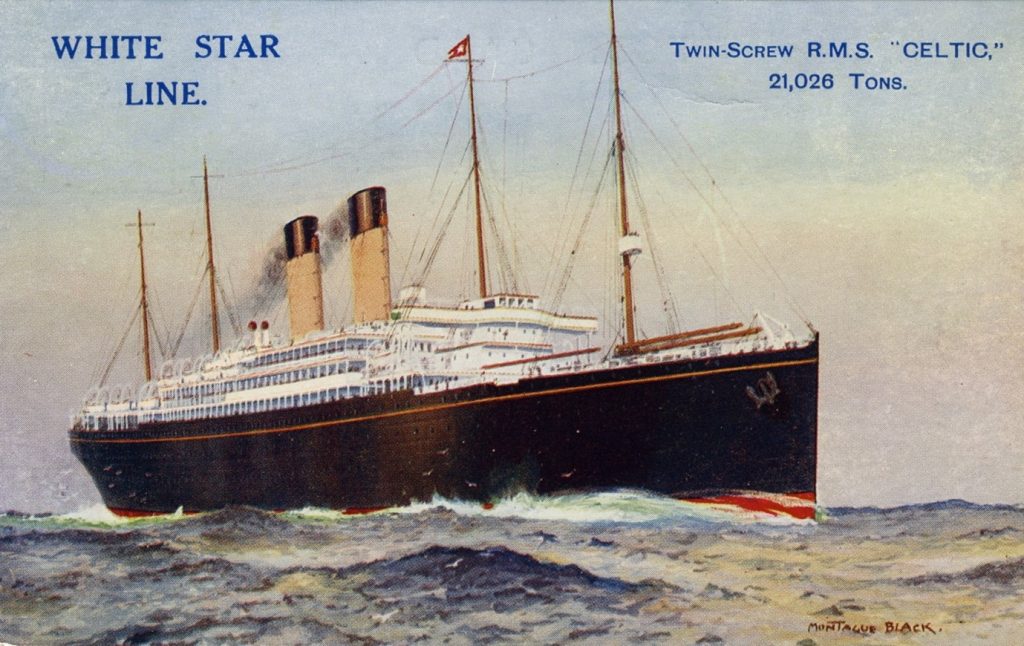 White Star Line Celtic ship: Wikimedia commons Florence sets sail from Liverpool to New York, April 1928. (In December of 1928, the Celtic hit rocks off the coast of Ireland during a gale and ran aground. All passengers were saved, but the liner was scrapped).

At Cadbury’s huge 1931 centenary celebrations, attended by nearly 20,000 people, Florence and Phyllis (her companion on her visit to the USA and Canada) won a prize in a fancy-dress competition of over 300 entries, which formed a procession of lantern-carriers nearly half a mile long – “a magnificent spectacle”: the two were dressed up as Minnehaha and Hiawatha (perhaps inspired by their trip together across the Atlantic?). The impressive scale of these celebrations can be found in this short, silent Pathe News film here. 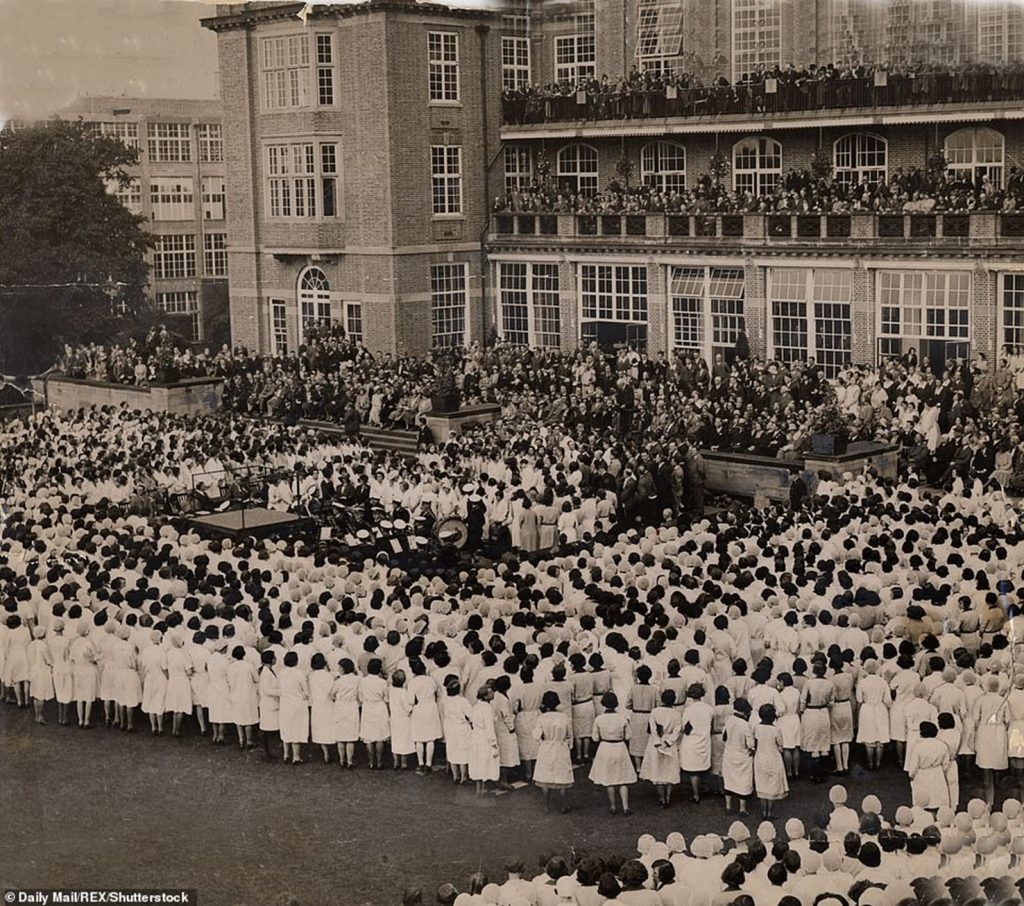 The 1939 record of Florence living at St George’s Court reveals that, on the eve of World War II, she was volunteering for the Auxiliary Fire Service.

Florence’s sister Agnes addresses the National Council of Women about her experiences in Australia. From L to R: sister Gertrude, Agnes, Florence and the chairman, Mrs Binks. Eastbourne Gazette, 1957

Florence was the first of the Catnach sisters to move to Eastbourne, where her sister Agnes sometimes visited and gave talks about her life experiences, particularly her trip to Australia. At that time, Florence was a member of the Eastbourne Branch of the National Council of Women and was involved in fund-raising activities.

All three remaining spinster sisters (Florence, Gertrude and Agnes) spent their latter years in Eastbourne, and died there in the 1970s. Florence lived to the grand age of 87 (as did Agnes).

A family tree spanning six generations has been compiled, rooted firmly in Newcastle-Gateshead and spreading more recently to the Peterborough, St Albans and London areas through the surnames of Catnach, Luke, Davidson and Dacre.

Interestingly, the ‘Burney Catnach’ twinning of names has perpetuated in male descendants through four generations until at least the 1960s, reflecting the maiden name of Florence’s grandmother Margaret Burney, who was born in Felling, Gateshead in 1822 and whose father, Charles Burney was a cordwainer – a maker of shoes rather than a cobbler, who mends shoes.  Margaret married Thomas Catnach, who was a Customs Officer: in 1881, Florence’s grandparents were living in the Customs House on Newcastle Quayside.

This research has revealed a long and diligent commitment by Florence for the welfare of women – from her work at Devil’s Porridge, at Cadbury’s Chocolate Factory Bournville, and her additional commitments in the world of women’s welfare and rights through and including her retirement years in Eastbourne.

Her own words in the Mossband Farewell magazine proved to be prophetic:

“The pure spirit of comradeship, the earnestness of work, and above all, cheerfulness, have given life at Gretna a power to mould and impress the characters of all those who shared in it. The Factory may have been a “war-time measure,” but the limit of its influence will not be set by the date of any armistice or peace terms.”

Acknowledgements: with thanks to Daniel Callicot, Heritage Manager at Bournville Village Trust, who was very helpful in searching for relevant material from Bournville with regard to Florence’s life there after the Devil’s Porridge.