Full name of worker at H.M. Factory Gretna (and any other names they are known by) : Harry Marchanton LOWE

While at home and still at school, made paint from raw ores; size and distemper  for his father’s painting business. 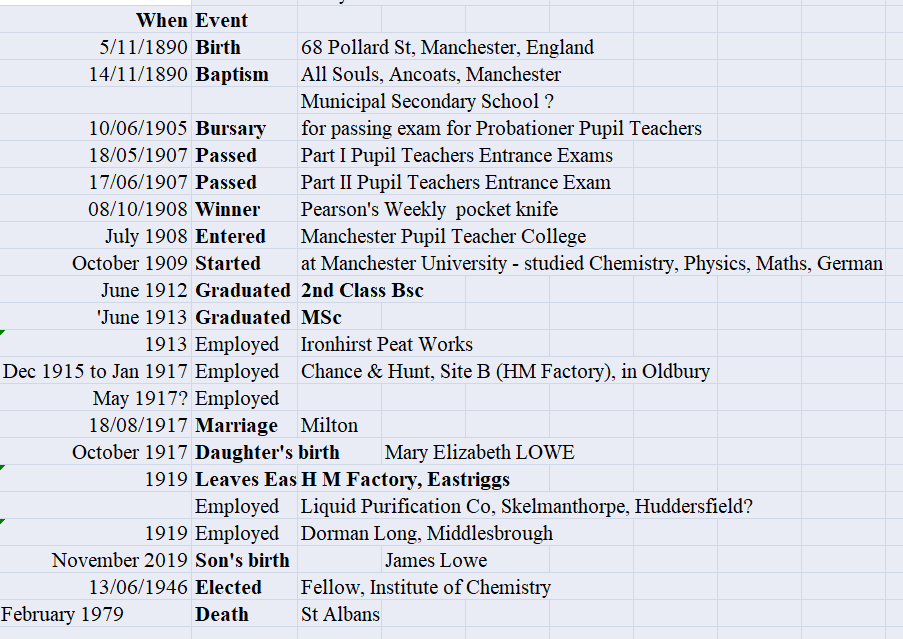 5a. H M  Lowe’s degrees from University Of Manchester’s register of graduates p414

The initial ‘c’ before the name means Member of Convocation.

Tentative: Report of lecture by Prof Harold Dixon on Experiments on Abel’s Theory that Incombustible Dusts Act Catalytically on Igniting Mixtures of Weak Methane and Air carried out by himself and Mr  H M Lowe at Manchester University – see Manchester Courier and Lancashire General Advertiser – Wednesday 22 January 1913 and p36 General and Physical Chemistry.pdf

This is quite likely to be him, my cousin remembers that he worked on making explosives as part of his degree.

According to Dumfries Archives:

Throughout this entire period the land of Ironhirst was owned by James Jardine Paterson.

I think it is most likely that Mr Lowe would have worked for Wetcarbonizing Ltd as it was working the Ironhirst area in the beginning of 1913, but was not by early 1914.

Unfortunately we do not hold any records for these companies. They might be held in the Business Archives in Glasgow, their website can be found here: University of Glasgow – MyGlasgow – Archives & Special Collections – Discover our collections – Scottish Business Archive , but most likely they no longer exist.

According to Mike Veissid, https://veissid.com/product/wetcarbonizing-ltd-1-ordinary-shares-1917-printed-by-bradbury-wilkinson-red-vf/Wetcarbonizing Ltd,  patented a process for making fertiliser utilising peat. However, there is a modern US patent Process for wet carbonizing of peat (see https://www.osti.gov/biblio/5786476-process-wet-carbonizing-peat) which seems to be for making peat brickettes.

An older US patent started 1915 granted 1932, is for making peat brickettes. The London Gazette shows the voluntary liquidation of Wetcarbonizing on 31 Aug 1921.

A bit of ICI was sold in 1969, another bit in 1977, other parts of the business to Zeneca (now AstraZeneca) and other companies, and in 2007, Akzo Nobel acquired what was left. Chance and Hunt, since 2002, are part of Azelis.

According to https://www.agrokarbo.info/nassverkohlung/bericht-ironhirst/, a syndicate built a small plant at Dumfries, Scotland, and continued experimental work until 1911. In 1912 a new company was formed, called Wet Carbonizing, Limited,

During the first years of the war the plant was closed down, no commercial success in production of fuel or recovery of by-products having been attained, although very heavy expenditures had been made over a period of several years.

The Ministry of War, having found that the wet-carbonized briquettes were a smokeless fuel and, therefore, particularly suitable for use in the trenches, took over the property as it stood in 1917, and, with the benefit of the experience gained, erected a new plant, designed on a large industrial scale, for the production of 60,000 tons of briquettes per annum. The new plant, which was well designed and thoroughly equipped, and built at the expense of the British Government, was not completed until after the close of the war, when it was turned over to the company for operation, and regular manufacturing of fuel was begun in October, 1919. Operation of the plant was made feasible by the utilization of slack coal as fuel, the maximum price for which, under government regulations prevailing at the time, was fixed at 30 shillings per ton, and owing to the heavy demand for fuel, the briquettes produced could be sold, free from restriction, at 90 shillings or more per ton.

Email from Peter (Harry’s grandson), May 2022: ‘Harry wasn’t in the Forces. He tried twice to enlist but failed the medical – only one working lung and flat feet.  He told me that the doctors had rejected him because of his weak heart, too.   However, unless he tried to enlist for a 3rd time, that was wrong because his weak heart occurred as a result of his work with TNT in Birmingham, where he worked before Eastriggs.   I don’t think his disabilities affected him much, except that he couldn’t walk long distances and he couldn’t lift much.   In spite of his missing lung and emphysema, he smoked 20 Capstan full strength cigarettes every day and even at age 85 he had more upper body strength than I had at age 22! I doubt he thought of himself as disabled.  He would have reserved that term for people missing one or more limbs or who were totally blind.’