Full name of worker at H.M. Factory Gretna (and any other names they are known by): H.B. Fergusson. (Hugh Boscawen Fergusson).

Parent’s occupations: The 1911 England Census states that his father was a civil engineer.

Occupation: In the 1939 England and Wales Register, he is recorded as being Director of a Steel Munitions Works. Information from the Imperial War Museum Website refers to him as the: works manager of the Royal Ordnance Factory in Gretna (c. 1916 – 1918), chief technical adviser to the British Military Governor at Cologne (c. 1918 – 1919), and manager of the heavy construction department and then on the board of directors of G A Harvey and Company (London) Limited in Greenwich (1933 – 1953), which specialised in oil refinery equipment. Civil engineer in 1911.

Children: Charles Boscawen Fergusson (1915-1989) and one other child who has been kept private on Ancestry.

Travels: He was born in Shanghai, China, and some time soon after that came to England. As he got married in Canada in 1913 it is also likely that he lived there for some time. There is evidence of him living in both Britain and Canada at various points.

Awards/recognitions: Material from the Imperial War Museum suggests that he was awarded an OBE.

Probate: The date his probate was granted was November 18th 1953, but the amount is unknown.

From page 202 of ‘A Thesis Submitted for the Degree of PhD at the University of Warwick: At Gretna’,:  a number of sports clubs were organised, all under the sanction of the Social and Athletic Association… The factory Recreation Committee comprised the higher echelons of factory administrators, including Miss Cotterell, the Lady Welfare Superintendent, the Gretna Town Manager, the Dornock and Mossband area managers, the acids section manager, the factory accountant and Ernest Taylor, the social manager. Also on the committee was Captain K.A. Wolfe Barry, an assistant superintendent who was also chairman of the Gretna Sports Committee, and head of the Gretna boxing and wrestling clubs, carpet bowls club, cricket club, tennis club and the Factory Football League. The Dornock area manager, H.B. Fergusson, occupied similar posts for the Eastriggs sports clubs. Below the Recreation Committee came the Social and Recreation Department, run by Ernest Taylor and three female assistants, Miss J. Ferguson, Miss I.M. Fryer and Miss E.R. Brown. Thus, not surprisingly, factory officials were closely involved with supervising recreation. 47.

He may have filed for a patent for the construction of thick-walled high-pressure vessels on January 17th, 1947.

His name appears four times in Dornock Farewell. On page 36, under the title ‘At Dornock’, there are the lines, ‘There’s Fergusson wi’ tactfu’ hand, Guides his team in manner grand. Ye’d think he waved a fairy wand at Dornock’.

He appears on page 46 in the Dornock Alphabet (poem), in the lines ‘F is for Fergusson. Dornock’s “big noise,”, there’s no doubt about it- he’s one of the boys’.

The lines from these two poems suggest that he was held in high esteem at Gretna, including by the people who worked under him.

On page 63, in the article, ‘Things the Camera missed’, it refers to him as, ‘in shirt sleeves, preparing his paper to the Scientific Society on Reinforced Concrete Bridges’.

He also wrote the Foreword to the magazine, on pages 9 and 10. 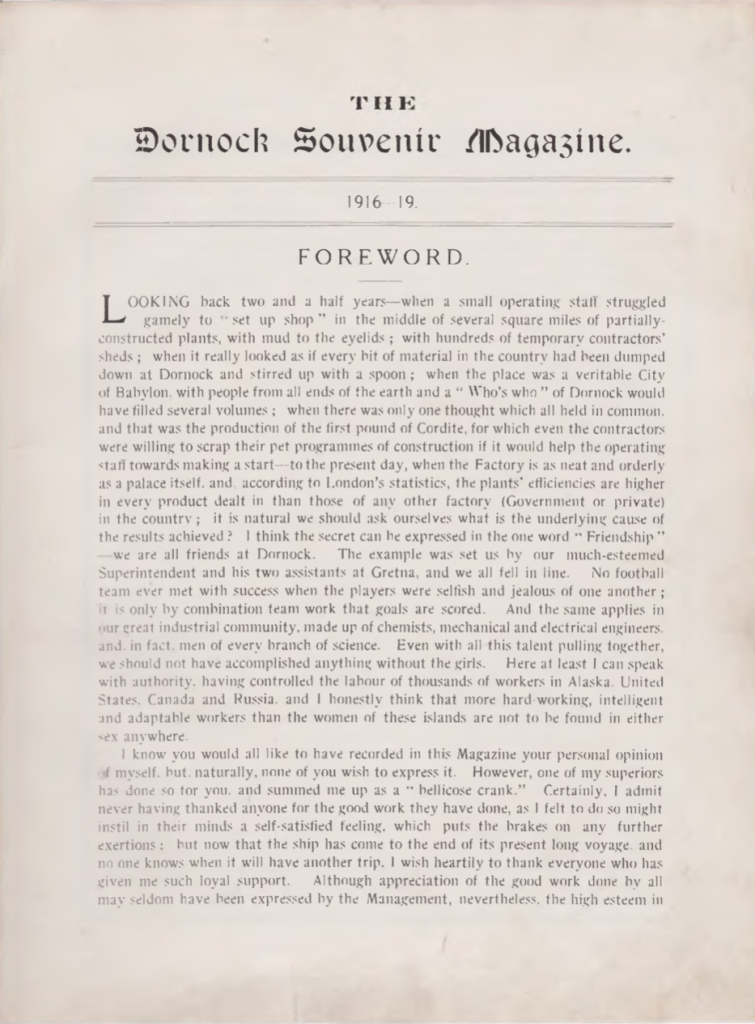 H. B. Fergusson’s foreword from The Dornock Farewell, held in the archive collection of The Devil’s Porridge Museum 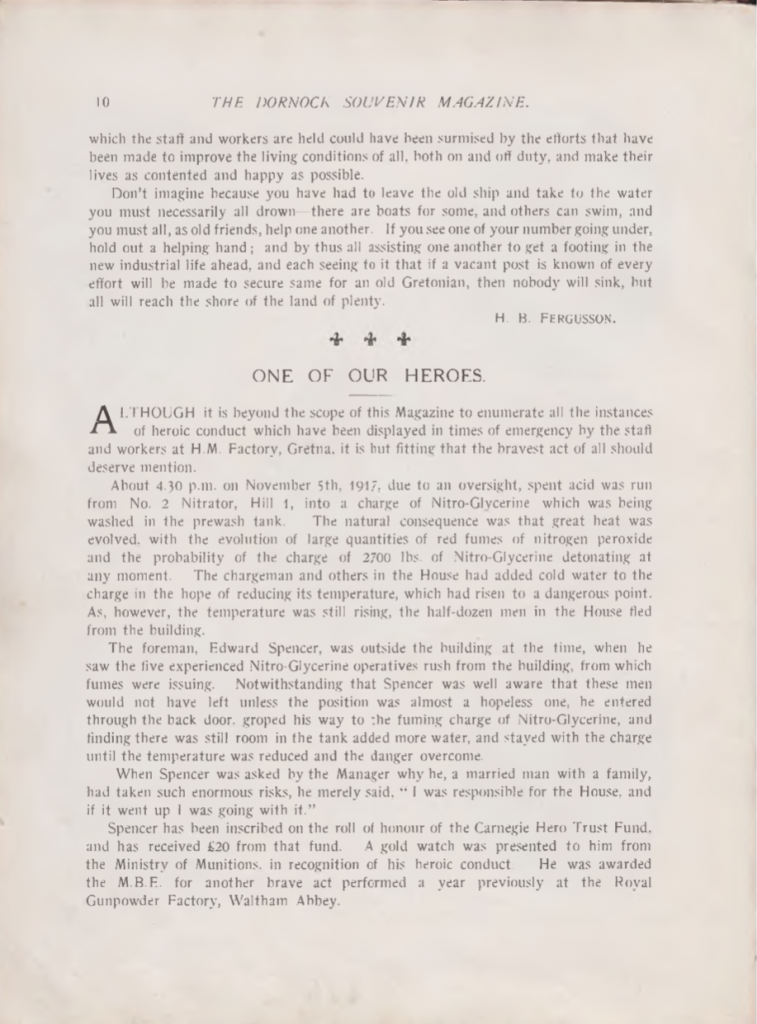