Date and place of birth: 27 June 1855 Dalziel, Lanarkshire, Scotland
Date and place of Death: 31 August 1931 in Pretoria, Transvaal, South Africa
Nationality:  Scottish
Biography:  James grew up in Scotland, the eldest of a large family. His siblings were –

First marriage was to Margaret (Maggie) Calder with whom he had 6 children.

The Prentice family in 1891 were living in Hariettville, West Calder, Midlothian, Scotland

James returned to UK on board the ‘Saxon’ along with his wife and children to come to HM Factory in 1916
Awards/recognitions: Nil known 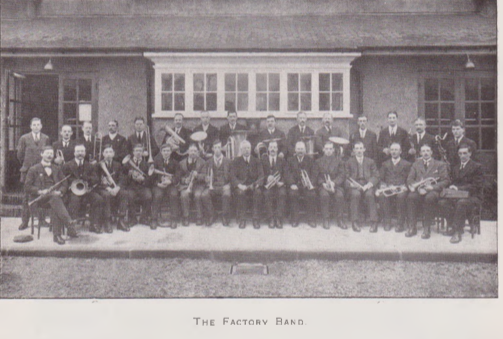 Factory Band pictured in the Dornock Farewell, held in archive collection at The Devil’s Porridge Museum

SOME two years ago the workers on the Dornock Area of the Factory thought they would like to start a Band, and the proposal was put before the Factory Social and Athletic Committee, but after consideration it was turned down. However. the failure of the promoters only increased the desire of the Dornock workers to have at least one musical organisation which would be looked upon as part of Dornock social life, and in order to attain their desire the people of the Area were quite prepared to provide funds to purchase instruments and other accessories for the equipment of a Semi-Military Band. The transfer of Mr Prentice to Dornock as Resident Engineer gave great encouragement to the supporters of the proposal for a Band, he being the Director of all musical organisations under the Committee. When the proposal was put before him he at once prepared a scheme for the formation of a Band (brass and reed instruments), and submitted same to the Committee personally. Power was given to negotiate for the purchase of a set of silver-plated instruments which belonged to the famous contesting band, Polton Mills, near Edinburgh. The membership of the Band included many experienced brass and wood instrument players, and they progressed rapidly under the patient and skilful tuition of Mr Prentice, who was appointed Musical Director by the Committee. The first call upon the services of the Band was on Armistice Day when, on short notice, they turned out and headed the procession round the two Factory Townships, and also provided dance music for the large number of munition workers assembled to rejoice on such an important occasion. The playing of the Band was a great surprise, and a source of pleasure to all. The band has also given several concerts, and their performances have been greatly appreciated. The members of the Band are all employed on the Factory, and give their services willingly when required, being all keen bandsmen.