Date and Place of Birth:

Date and Place of Death:

Biography
John’s parents were raised in Caithness, Scotland. They emigrated to New Zealand shortly after their marriage in 1872 as all of their children were born in New Zealand. John’s siblings included:

Parents: John Henderson a farm labourer married Christina Banks, his housekeeper in 1872 in Wick, Caithness, Scotland.  John and Christina did well in New Zealand with John taking up sheep farming and retiring as a Gentleman.

John worked as a farm labourer, then became a sheep farmer.

Marital status:  Second hand information from the memoir of William Gidley Emmett, who worked with John at HM Factory, is that John married and had a daughter after WW1.  No evidence could be found for this.

Travels: John arrived in England to work at HM Factory in 1916. He had come from British Guyana where he was working at the Manager of a Gold Mine.

“On most Saturday evenings I went into Carlisle, 10 miles away, with Daddy Henderson on the back of my bike. Here we would have a steak and chips meal followed by a variety show at the theatre.  Henderson was a Scot in his early 40’s, hailing from New Zealand. He was perhaps my closest friend during my Gretna period, a bachelor of sterling character, with the highest principals of conduct, clean thoughts and a canny sense of humour.  His friendship was a great support to me while I was getting used to my heavy responsibilities.  He got the nickname Daddy as he was some 10 to 15 years older than the run of the staff.  After the war he returned to N.Z., got married and had a daughter.  I visited him there with Reg in 1952 and found him little changed after 33 years, though he had a weak heart from which he died a few years later.

Powfoot was another place we frequently visited, situated on the Solway Firth beyond Annan with a pleasant golf course, good enough for us amateurs. Henderson and Stark (from the Ether Plant) usually formed a team with me and another, and after our game we had whiskies on the quiet, in a back room of the hotel,  as the licence did not apply to Sundays. However we were on very good terms with the hotel manager, a good sport. Annan residents were said to have written to the local paper  complaining of our disturbing the Sabbath peace as our motorbikes traversed the town on our way – little we cared!”

Email from John’s relative in 2022, providing more details about his life:

The Henderson parents’ family farm “Harpsdale” in Hinds South Canterbury NZ was named after Harpsdale Balnahard Caithness in Scotland where his Great Grandparents Henry and Mary (nee Sinclair) Henderson, his grandparents Hugh Henderson (1786- 1864) and Janet (nee Campbell) Henderson (1830-1898) and parents lived. His parents (John Henderson (1851-1925) and Christina (nee Banks) Henderson immigrated from Scotland in 1872 and lived at Wyllie’s Crossing, Taieri and Hinds Canterbury. Another of the Henderson family farms in NZ belonged to his son William Henderson and was  named “Windemere” It was in Ashburton NZ and was named after Windermere, England’s largest lake in the Lake District.

John Henderson Snr (John Henderson’s father) and all of his siblings Alexander, William, Maggie and Hugh were born at Balnahard Caithness Scotland.

All John Henderson Jnr siblings were all born in New Zealand:-

-George Henderson b 1883 was the youngest son a shepherd he enlisted and served overseas with the Otago Mounted Rifles in WW1.

They had two daughters:- 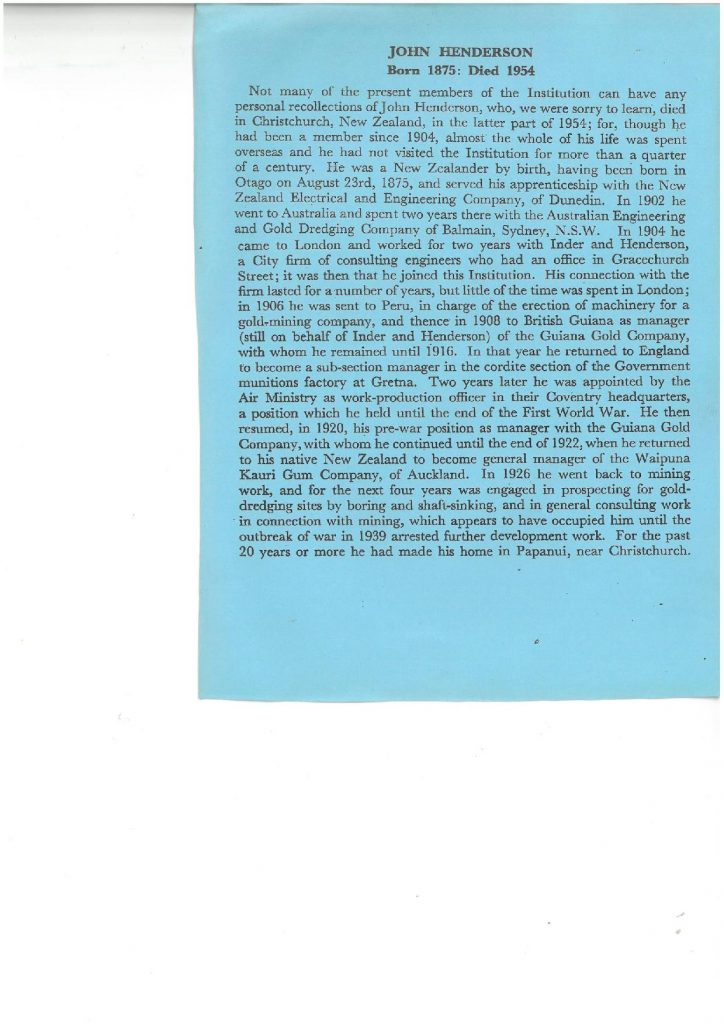 Obituary from the UK Engineer Institute, kindly shared with the museum by John’s family.