Full name of worker at H.M. Factory Gretna (and any other names they are known by): Dr Gilbert Aitken Welsh

Do they already have a Wikipedia page? If yes, please paste link: No 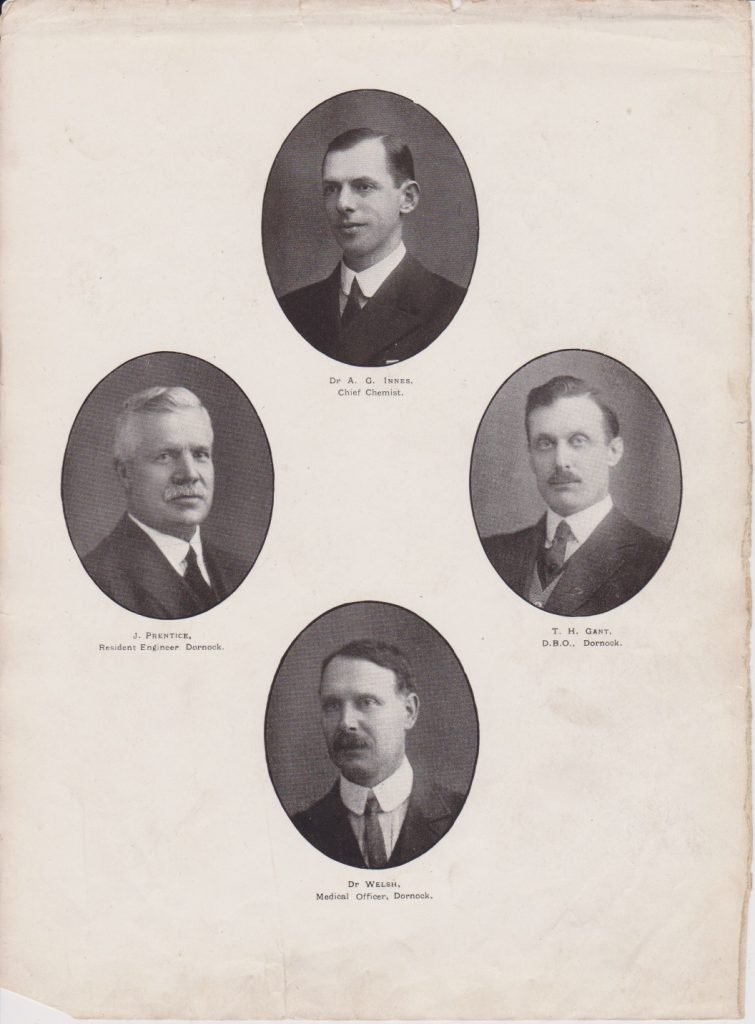 Photo taken from the Mossband Farewell, in the archive collection of The Devil’s Porridge Museum

Travels: Embarked Liverpool 21st March 1914 for Tenerife, then arrived back in Liverpool from Tenerife 13th April 1914

Page 50 of Dornock Farewell: “Unfortunately, the closure of the Factory has prevented the continuance of a First Aid Course which the Rescue Brigade was following under the instruction of Dr Welsh”.

“A clinical study of points bearing upon the aetiology and course of some forms of syphilitic insanity: with eight cases.”

Blogs about the individual: N/K

Websites about the individual: N/K

Gilbert Aitken Welsh was a GP who worked as a medical officer at Dornock during the Great War.

Gilbert was born in Edinburgh on 18th July 1874 in Edinburgh. He was the son of Thomas and George Ann Welsh. Thomas was a chemist and druggist.

Gilbert trained as a doctor at Edinburgh University, graduating in 1898, and a copy of his dissertation is in the University’s archive.

He became a GP at Garlieston, Wigtownshire.

On 21st March 1914 for Gilbert sailed from Liverpool to Tenerife. He then returned, arriving back in Liverpool from Tenerife 13th April 1914.

Gilbert served as a medical officer at Dornock during the war. On 23rd July 1916 he attended a fatal accident when Vivienne Dunn, the wife of chemist James Dunn, was killed by runaway railway wagons on the level crossing at Dornock.

After the war, the family remained in Gretna for a time. Margaret was born there, and the family were living at Croft House. Gilbert sued the War Department for £125 as the recompense for using his car for government service during his time at H M Factory Gretna.

The family later moved to Edinburgh, where Gilbert died on 1st July 1935 in Edinburgh, after collapsing in his local bank. He is buried in Grange Cemetery.