Newspapers: Only as attending wedding in Maids Morton

Career after: Lady’s Maid in 1921 at Leawood House, Bridestowe, Devon

It appears Rosa joined the Police in the Great War possibly underage, although her relation Emily Violet who joined at the same time was old enough. There is no indication if they served at Gretna all their time in the WPS.  She went into service as a Lady’s maid, employed by Capt. N Summers, Leawood in Devon. After the war, Rosa went abroad before marrying Arthur F Edmunds in 1923. Their first child, Joyce, died within the first year, which is the same fate as befell Rosa’s brother, James. After marrying, no confirmed employment relating to safety services has been located for Rosa. The couple had two more children. The family appear to have returned to Maids Moreton where Rosa died in 1972, about 46 years after her father James had passed away on 13 September 1925 also at Maids Moreton aged 63. She is buried along with Arthur in the graveyard of St Edmund’s, Maids Moreton. 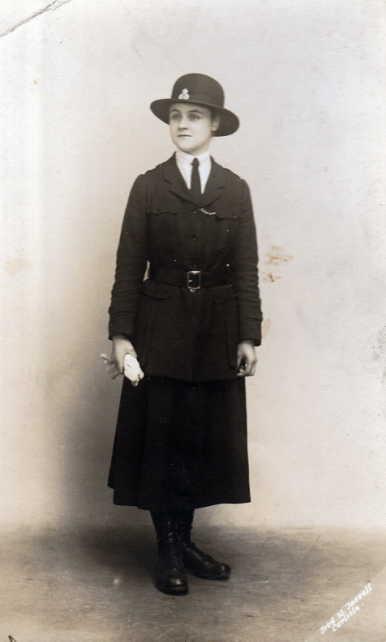 Rosa in her WPS uniform at Gretna. Photo taken from public Ancestry tree.