Full name of worker at H.M. Factory Gretna (and any other names they are known by) : Sarah Elizabeth Watt 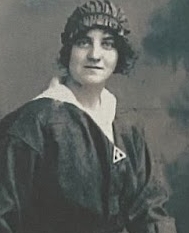 Schools / universities attended and years of attendance: None found.

Occupation: In 1911 census described as “at home” despite being 19. Trained and served as anurse at Newcastle General Hospital at start of WW1. This from Stewart Adamson but un-corrorborated.

Place of residence at Gretna:  Not checked but not Eastriggs

Job title at Gretna: Not known

Related by City - Newcastle upon Tyne