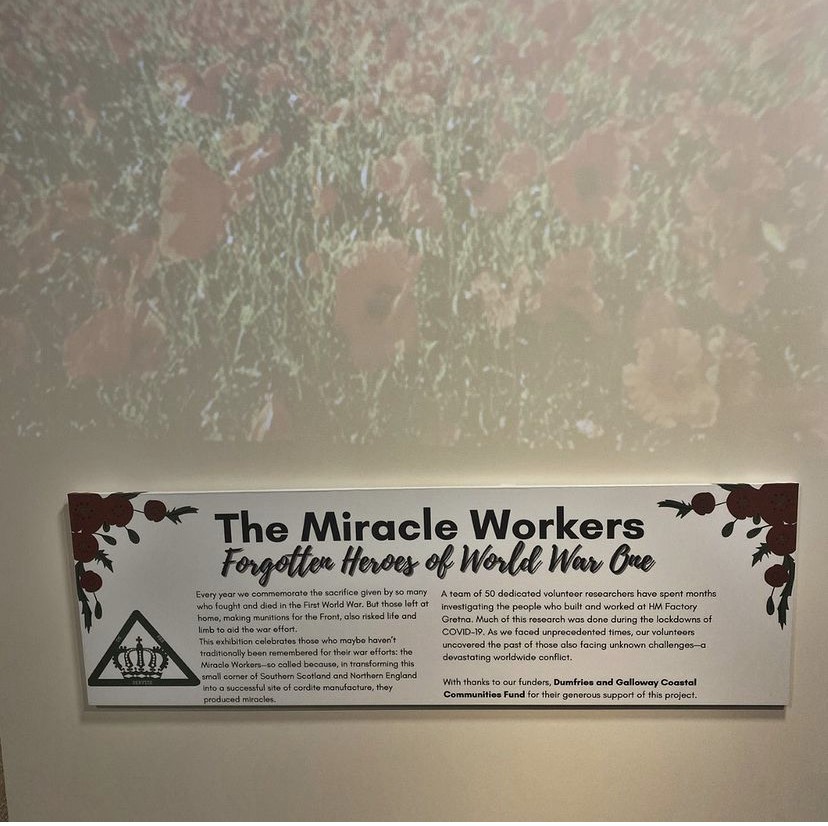 Every year on November 11th we commemorate the sacrifice given by so many who fought and died in the First World War. But those left at home, making munitions for the Front, also risked life and limb to aid the war effort.

The Devil’s Porridge Museum is proud to announce a brand-new exhibition and commemorative film that celebrates those who maybe haven’t traditionally been remembered for their war efforts: the Miracle Workers—so called because, in transforming this small corner of Southern Scotland and Northern England into a successful site of cordite manufacture, they performed miracles.

A team of 50 dedicated volunteer researchers have spent months investigating the people who built and worked at HM Factory Gretna. Much of this research was conducted during the lockdowns of COVID-19. As we faced unprecedented times, our volunteers uncovered the past of those also facing unknown challenges—a devastating worldwide conflict.

In doing so, our researchers have uncovered untold histories of the bravery and sacrifice of the thousands of people that worked here.

“This project has been a momentous achievement for the museum,” said Laura Noakes, the Museum’s Research Assistant. “Researchers based across the country and even further afield worked remotely to investigate the lives of the extraordinary people who helped turn the tide of World War One. “And we’ve found some amazing history—like the bravery of Maud Bruce, who won an OBE for her munitions work in the First World War, and the genius of Cyril Callister, an Australian chemist who later invented Vegemite!”

Richard Brodie, The Devil’s Porridge Museum’s Chairman says, “ 30,000 women and men worked here at HM Factory Gretna. We are privileged to tell their story as our research uncovers more details of their valour and sacrifice.”

The Miracle Workers Exhibition and Film open on November 11th at The Devil’s Porridge Museum. Visitors to the museum will be able to see both at no extra charge.