Agnes was born in Paisley, Scotland, in 1886. Her father, James Currie Auchencloss (also spelt Auchenschloss and Auchencloss in some sources) was a starch manufacturer according to her birth record. Agnes was, for a woman of her time period, highly educated — she graduated with a medical degree from the University of Glasgow in 1911, and worked in the Royal Alexandra Infirmary in her hometown.

In July 1914, she married Gosta Lundholm, who also worked at HM Factory Gretna as the Assistant Section Manager of the Nitro-Glycerine Section. Gosta attended the Edinburgh Academy for his schooling and later studied chemistry at the Eidgenössisches Polytechnikum in Zürich. After graduating, he obtained a job in South Africa.

However, on the outbreak of war Gosta’s skills in chemistry were desperately needed back at home, and so from June 1916 he began working at HM Factory Gretna. Agnes and Eric Olof joined him, the family living at No. 9 The Ridge.

In 1917, King George V and Queen Mary toured the factory, and Agnes met Their Majesties. She said to the King: “It’s good to be in the hands of a kent face” Kent means well known, or familiar. The King appreciated Agnes’ remark!

Gordon Routledge describes Gosta as one of the ‘leading chemists’ at HM Factory Gretna, and it appears that he was well-known and well liked there! He appears in the Mossband Farewell, one of the magazines put together by staff at the end of the war. Although we know less about Agnes’ role at the factory, it is probable that as a medical officer in a munitions factory, she was kept busy attending to injuries and illnesses, and also regularly checking worker’s health given how often they came into contact with dangerous chemicals.

After the war, the family returned to South Africa, with Gosta returning to his job at the explosives factory. Agnes offered medical aid to locals, and her son Eric Olof later wrote of one particular occasion when there was: “an Afrikaner family on a farmstead out on the veldt, stricken by typhoid fever. My Mother did not drive, but my Father would drive us to the isolated farm where my Mother did all she could, and sorrowed for the Parents when alas some of the children died.” Agnes and Gosta had their second child, a son named Alan, in 1921.

The Lundholm family returned to Scotland in the 1920s. Gosta continued his career, working firstly Superintendent of the Lead Azide manufacture at Westquarter, Nobel’s ICI Detonator Factory, and then as Senior Superintendent at the new Detonator Department at Ardeer. Agnes joined the Women’s Citizen Association and regularly visited the poorhouse, and the boys attended local schools. In the Ardeer Employee Information, Gosta is described as:

he loved motoring, tennis for which he won several cups, and later in life, sailing. Also DIY long before the term was coined. He had a pleasant singing voice and loved opera.
Towards the end of 1967 he took part in a sound radio documentary about the factory in the sandhills…. He was in great demand for factory dinners, recollects his son, Alan. He was teetotaller and could safely transport a carload to and from!

Gosta retired in the 1940s, and passed away in 1969, with Agnes passing three years later. Their son, Eric Olof, later spoke about his parents in an oral history interview:

My father and mother were very good people…Mother’s family lived in Paisley near Glasgow, her father died young, worked in the manufactory of cornflower. Mother qualified as a medical doctor in 1911. Father was working in a Factory in South Africa, parents married in Cape Town. Father studied chemistry in Zurich, but took a British qualification in Industrial Chemistry…but when the war started he was brought back to Britain to an enormous munitions factory at Gretna in the South of Scotland, and my mother came with him, and myself also, and my mother was employed as a factory doctor there…My father was a very quiet sort of person but I think very loving of his wife and of myself and my brother Alan…An interesting coincidence here, when my mother qualified as a doctor she went for one of her early postgraduate jobs to the Royal Alexander Infirmary in Paisley, a small hospital, and in 1950 when I qualified, my first year as a doctor was in that same hospital and I may indeed have occupied the same bed sitting room, I would have certainly eaten meals in the same dining room as she did so many years before. 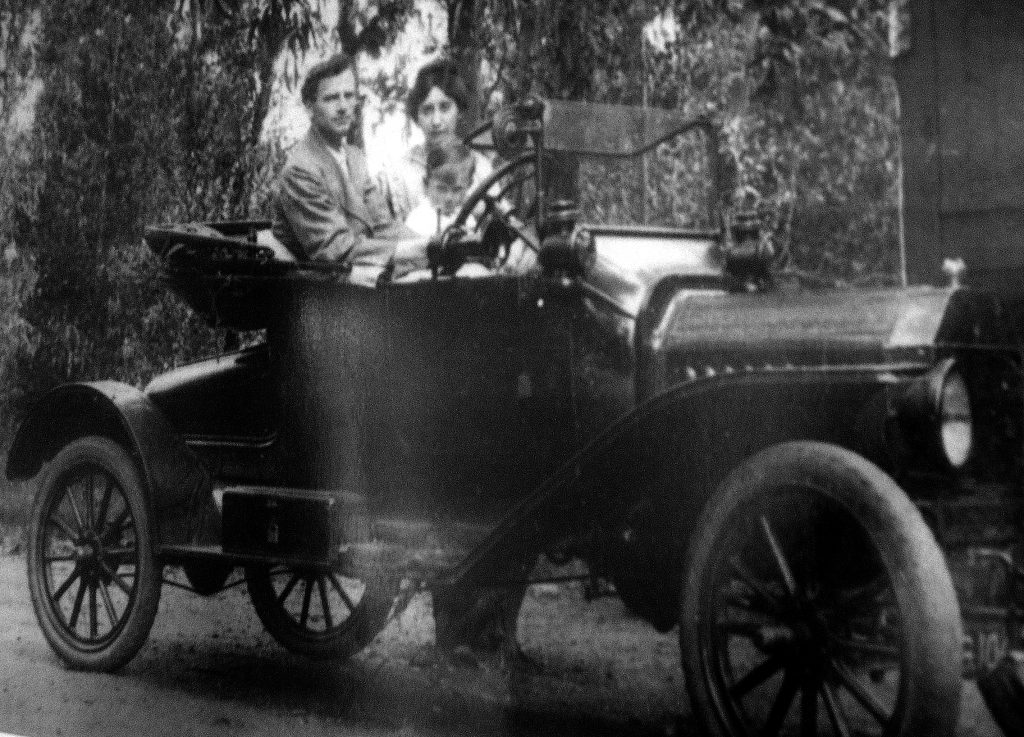 Gosta, Agnes, and one of their sons.