Full name of worker at H.M. Factory Gretna (and any other names they are known by) : 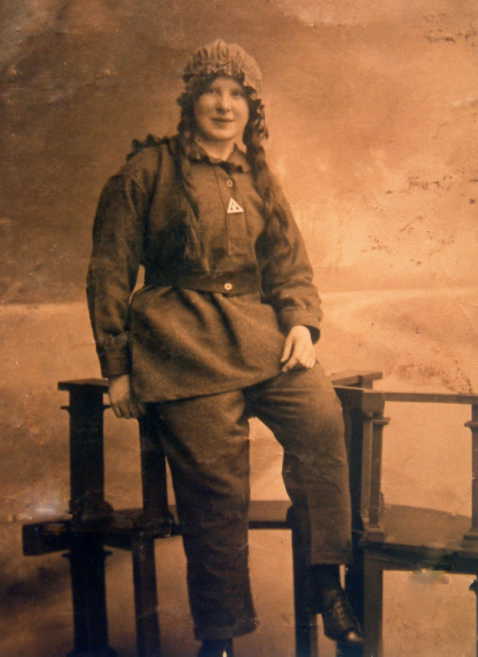 Catherine Manley, known to her family as Kitty or Kate , was born on 25th March 1901 to Catherine nee Keenan ( Keelan) and Thomas. Catherine was born at 89 John Street, No Place, Urpeth, Durham – near Beamish. She was the 5th of 8 children born between 1891 and 1906.

Thomas and Catherine senior were both Irish Catholics. Roman Catholic church records confirm that Thomas was born and baptised in Tallaghanduff, Co. Mayo, Ireland in 1865. His name at birth was Munnally which he changed prior to his marriage in England. Catherine senior was one of at least 11 children according to the 1881 census, her parents having been born in Ireland but she in Durham. Her father was a coke burner.

Thomas and Catherine married at Sacred Heart Church, Byermoor on 21st January 1891. Shortly afterwards, the 1891 census revealed that they were living at Farm Cottage, Lamesley , Durham, their surname was Manly and Thomas was a coke drawer. That same year their first child, Ann(e) was born.

The 1901 census lists Thomas at  33 as a  coke drawer, Catherine 28, John 4, Lizzie 2 and Catherine 1 month. Catherine senior’s sister Margaret is also at the address and is working as a dressmaker.

Mary is missing from this census and cannot be found on any documentation. Annie ( Anne )Manley , 12 is a patient in a Special hospital, Chester le Street. Wikipedia notes that Chester le Street hospital was founded as a workhouse and  “A new infirmary and isolation block were added to the south of the workhouse in 1898” Perhaps Annie had tuberculosis.

Before the next census in 1911 when Catherine was 10 , 3 more siblings had arrived and her father had died prematurely aged 45 on 2nd June  1910. This made Catherine, 38, head of the family. Son John at 14 was a coal miner driver underground, Lizzie, 12 was at school as was Kate ( Catherine ) 10, Matthew was 4. This 4 room dwelling at 10 Rifle Street, Stanley was also home to a young couple and their 2 year old and 4 month old as lodgers.

Ann can be found on a separate return aged 19 living with her maternal grandparents and three unmarried uncles. Her grandfather is 72 and still working at the coke works. Annie has no occupation. They lived at Marley Hill which is where Catherine’s ( Kitty/Kate’s) mother was born. Their family name is spelled Kinnon.

By the time Kitty was 16 in 1917 she was working as one of the youngest munitionettes at H.M. Factory, Gretna. A public member tree on Ancestry.uk includes this information and a photograph of Kitty in her Factory ‘uniform’. Many beautiful family photographs are included in the attached folder, all sourced from the same member. Having experienced the death of  her father and 3 siblings Kitty was possibly mature for 16 .

However, some time in 1917, her mother remarried. It is unclear which came first, Kitty moving to Gretna or her mother’s marriage. The marriage to Patrick Croney took place at St Joseph’s RC church, Stanley. Patrick, born in 1862 was 55 and Catherine 44. It seems that this was Patrick’s second marriage although the date of the first is not clear we know that he was widowed in 1914.. He had several children, one of whom was lost in France on 14th September 1918. Was Catherine at her mother’s marriage?

Kitty will have spent her time at Gretna working in the dangerous conditions of the time, living in one of the hostels or huts and enjoying the entertainment arranged in the form of dances, concerts etc. If she was there for the duration she would have left as production ground to a halt in 1918.

The next  factual evidence of Kitty is the 31st May 1919 when at aged 19 she married Christopher ( Kit)Wardle of 9 Briscoe Street, Gateshead at St Oswald’s RC Church Wrekenton, Durham. We learn later that Christopher was a mines storeman  -but there are photographs of him in uniform (included in the attached folder). Questions arise as to whether he served at Gretna for the Ministry of Munitions or whether  he saw active service but Kitty and he must have developed a relationship before the end of the war. No service record is evident.

Christopher ( Kit) was born in 1893 at Hewerth Colliery, Durham. He was the 3rd son of at least 7 children of William a coal storeman and Margaret. At 17 in 1911 he was working down the mine.

In 1938, Kitty’s sister Ann died aged 46. We know that Kitty and Kit spent holidays at a relative or family friend’s cottage at Rydal in the Lake District, There are photographs of them sitting in the garden of  the Lakeland cottage.

The 1939 register places the Wardles at 10 Palmers Villa, Washington County Durham. Christopher is a “mines storeman heavy work . Two lines are blanked out – Joan and Jack( John). Dennis is listed as a colliery repair depot ?t-wright, heavy worker. Catherine Moira is at school.

Tragically, Kitty’s son John was “ a casualty of the war”. He was killed on 11th May 1943 at Great Yarmouth. He was a driver with the Royal Electrical and Mechanical Engineers and was only 22. These details appear on findagrave.com. His service number was 10576945 and he was buried in St Oswald’s RC Churchyard at home.

We know that  Kitty’s mother dies in 1946 and her husband Kit on 14th June 1955 at Little Lumley. Probate indicates that his usual address is 12 Wordsworth Crescent, Springwell. He left effects of £695 2s to his widow, Catherine. The death of Kit dates all the photographs of them both in the attached folder to pre 1955.

Kitty survived Kit by 33 years dying at Washington , County Durham on 6th February 1988 aged 87. We know that she had at least 3 grandchildren, 2 to Joan and 1 to Dennis. There is no evidence that Kitty remarried.