Full name of worker at H.M. Factory Gretna (and any other names they are known by) : George Robert Shaw

Date and Place of Death: N/K

George Robert Shaw worked at Dornock during the War. Shaw seems to have been an alias and his real name was George Robert Prescott.

George was born in Devonport, Devon in 1886, the son of Florence Susan Prescott (later Howard).

Little is known of his early life, and he next appears in South Africa, enlisting in the Expeditionary Force at Potchefstroom, on 27th September 1915, as George Robert Shaw. He gave his occupation as Clerk. He served as a Corporal 6304 in the 3rd battalion of the South African Infantry. He was posted to Egypt and then France, where he was wounded in August 1916. Repatriated to the UK, George was eventually discharged as no longer fit for miliary service in September 1917.

At some point he came to HM Factory Gretna and worked at Dornock.

Following the War, he left Gretna, giving his forwarding address as his mother’s house at Lamorna Place, Keyham, Devonport.

George became a travelling secretary at the Ministry of Pensions, based in Edinburgh (1). However, in July 1919, he is back in Devonport and at this point his life begins to fall apart. He was arrested and charged with gross indecency with another young man aged seventeen. He was convicted at Devon Assizes and sentenced to four years penal servitude. In his mitigation, he had said that he was depressed following the death of a former comrade and had begun drinking to excess (2).

In August 1924, now a chef and living in Pimlico, George then appears at the Old Bailey in London, again charged with gross indecency with a nineteen-year-old soldier, where he is convicted and sentenced to twenty-two months hard labour (3).

In December 1933 he is charged at Torquay with stealing a gold watch. He is out-of-work and of no-fixed abode. He is still drinking heavily. He was sentenced to three months hard labour (4). In June 1934, he is again charged at Torquay for unlawfully entering the local hotel where he had recently been chef. He stated that he had a serious issue with drink and was again sentenced to three months hard labour (5).

Unfortunately, George disappears from the records after this, but it is unlikely that the rest of his life would have gone well for him. He had been severely punished for what today would be regarded as normal behaviour which, along with his experience of the War, sent his life into a spiral of imprisonment and addiction.

Name and address mentioned in the Dornock Farewell, held in The Devil’s Porridge Museum’s archive collection: 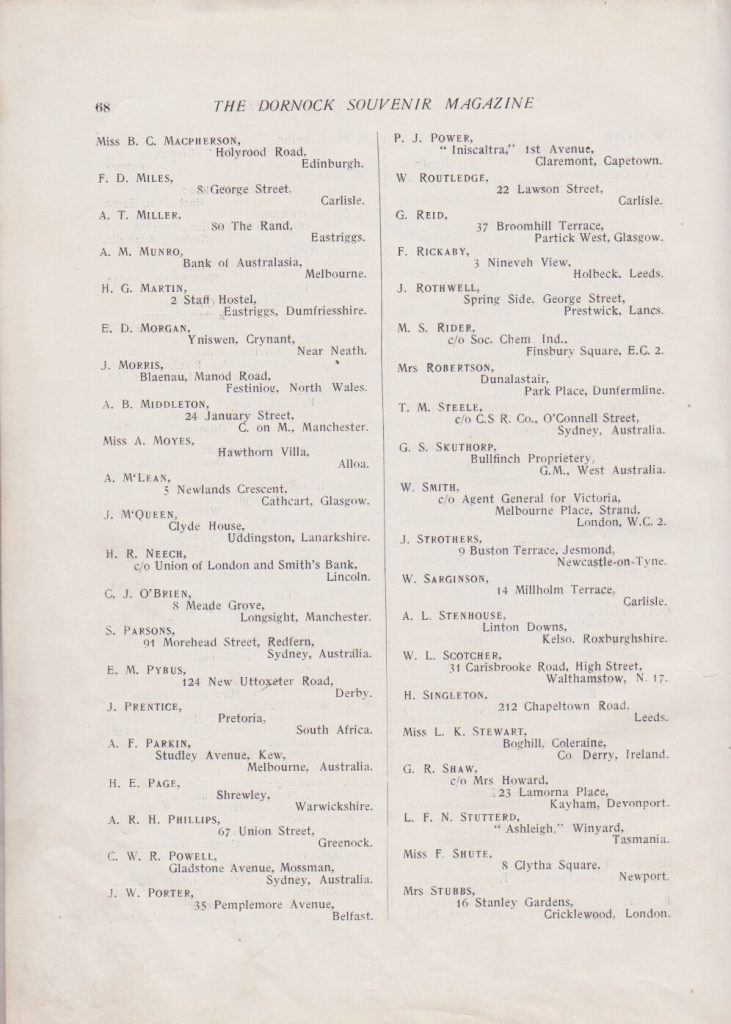