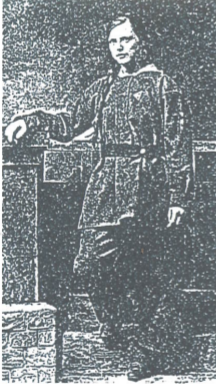 Hannah was a munitions worker at Gretna from 1917 to 1918. She heard about the plant from a friend, and they both signed up together, in Tudhoe, which is near Spennymoor.

The two travelled by train to the plant, and were initially billeted in a hut with several other girls from the North East of England. She remembers that a lot of the girls came from Sunderland. Unfortunately the hit was not wind and watertight, and many of the girls began to have serious doubts about their decision to come to the plant. However, the next day, they were moved to a complex of huts which varied in size, but which were connected by a communal dining hall. The food provided as of a very hight standard, but the constant repetition of kippers for breakfast led to a half day strike by the girls, until this was varied.

Hannah was given a works number, 3-11-39, and was sent to work in the gun cotton plant. There were two sections of this plant, which included a wet and dry area. Her strongest memories are of the drying out process, in which the cotton was removed from the large zinc pans and placed in bags.

This was a dusty job, and the workshop had to be continually hosed down. As a result, the girls were provided with rubber boots, and face masks. Due to the impregnation of this dust, on to their clothing, immediately after the shift had finished, the girls’ trousers and tunics were replaced.

After a while, Hannah became a chargehand, and supervised a group of girls, including some Gaelic speakers from the Islands. Her main task was to teach them how to dry the cotton. Included in this job was also a section about training in fire fighting by the local Fire Briagde, and the girls were taught to handle hoses, scale ladders etc.

Hannah also remebers that she was supervised in turn by a femal supervisor, who was provided with a distinctive khaki uniform, consisting of a wide brimmed hat, belted jacket, skirt and tie, with a shirt and dark stockings, and shoes.

Many of the girls obtained late passes, and travelled to Carlisle and Dornock, to attend dances and variety shows. Moreover the girls often entertained each other by producing their own shows, with each girl doing a turn. There were also sporting events, such as the Dornock Hockey Team.

Hannah worked at the plant throughout the running down period of 1919, and then returned to Spennymoor, where she went into domestic service prior to her marriage.