Full name of worker at H.M. Factory Gretna (and any other names they are known by) : Mary Annie Anderson 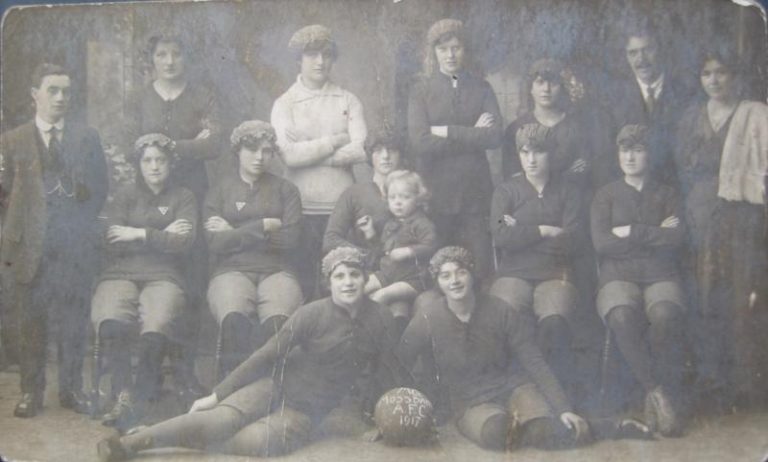 Team picture of the Mossband Swifts, one of the women’s football teams at Gretna. Mary may be in this photo. From The Devil’s Porridge Museum collection

Childhood: Brought up at Kirkpatrick Fleming and Buckbank, Dalston Cumberland.

Schools / universities attended and years of attendance: No record of school or college attendance.

Mary Annie Anderson, was born at Kirkpatrick Fleming a village five miles from Annan, the birthplace of her father, Thomas Anderson. She was more likely to have been known as ‘Annie’ and was 16 when she entered work at the Gretna factory. She was assigned to the Mossband and besides her work there she was also involved with sports activities mostly through the Mossband Swifts football team. The Swifts were one of at least three sides at the factory that played during the war and were made up largely from the workers of A Shift. On August 18th 1917 the Swifts travelled to Maryport to compete in a football competition one of the events for the Alexander Day Sports Fete. It wasn’t a good trip however losing 1-0 in the first round to Cockermouth. On September 15th the Mossband Swifts visited Carlisle where they met workers of the local Cumberland works at Brumpton Park home of Carlisle Utd. The Carlisle side went ahead after Miss Graham scored from a first half penalty. In the second period however Mary Anderson took the ball up field and her cross into the area found M. McAdo to equalise. McAdo scored again but it was ruled offside and another chance just before time was missed, leaving the match tied at 1-1. The Swifts made further trips to Carlisle in December 1917 and in January 1918 met a side consisting of wounded soldiers. After the war Mary Annie Anderson settled in Carlisle and in the spring of 1921 married Joseph Irving Lightfoot a former army veteran discharged in 1919. By 1939 the couple were living at 35 Botcherby Avenue, Carlisle, Mary working in unpaid domestic work and Joseph a Railway goods guard. Joseph Lightfoot died in 1964 and Mary Annie Lightfoot in 1976.