Get to Know the Medical Staff of HMF Gretna 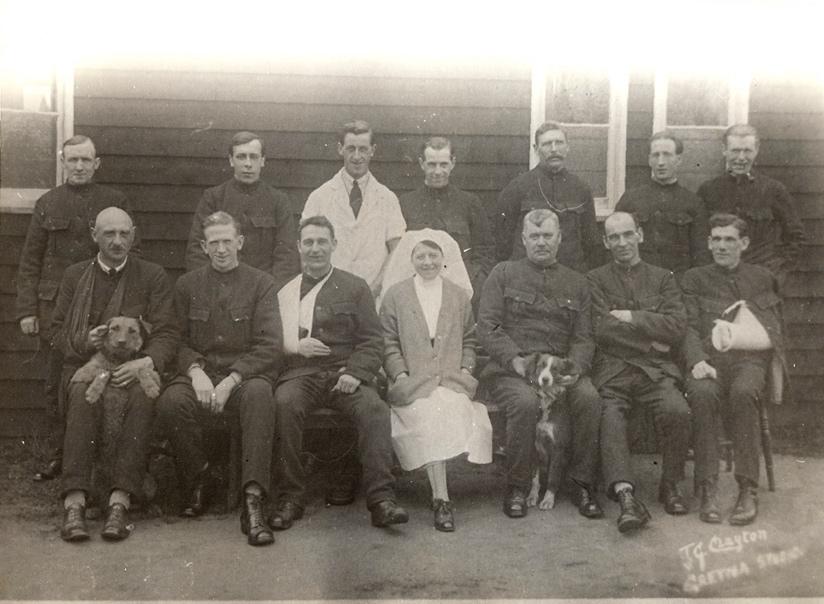 Researched and written by Laura Marley.

During the First World War, health and safety standards were not as high as they are nowadays, however, at HMF Gretna there were efforts being made in order to keep the workers safe. There was a Works Hospital on site which had space for 16 patients. However, a larger hospital was later built which could accommodate a further 84 patients. From the 22nd of July 1916 to the end of 1918, Gretna Works Hospital treated 789 patients in total, with 273 being male patients and 516 female patients. Every female worker at the factory was given a medical inspection before they began working there. This would help to check that they were healthy enough to work in the factory. The factory had several first aid stations located across it which were used to treat workers who had sustained injuries which were not severe enough to be taken to the hospital. They were located in high-risk areas of the factory and had both male and female medical staff manning them. HMF Gretna had 3 ambulances which, on average, each travelled 370 miles per week. There was a Maternity Home which had room for six patients. This was important as many of the workers at HMF Gretna were female. The War Office also reserved beds at local hospitals for factory workers in case of serious injury as the Works Hospital could only treat so many patients at a time. Until the 31st of December 1918, local hospitals received a total of 709 patients from HMF Gretna. These were paid for by the War Office and included more male than female patients.

Gretna Works Hospital, which was located in the grounds of HMF Gretna was staffed by extremely experienced doctors, nurses, and surgeons who treated a large number of patients due to the dangerous nature of working within a munitions factory. Not much is known about those who worked in Gretna Works Hospital, but this article will help us get to know them better. 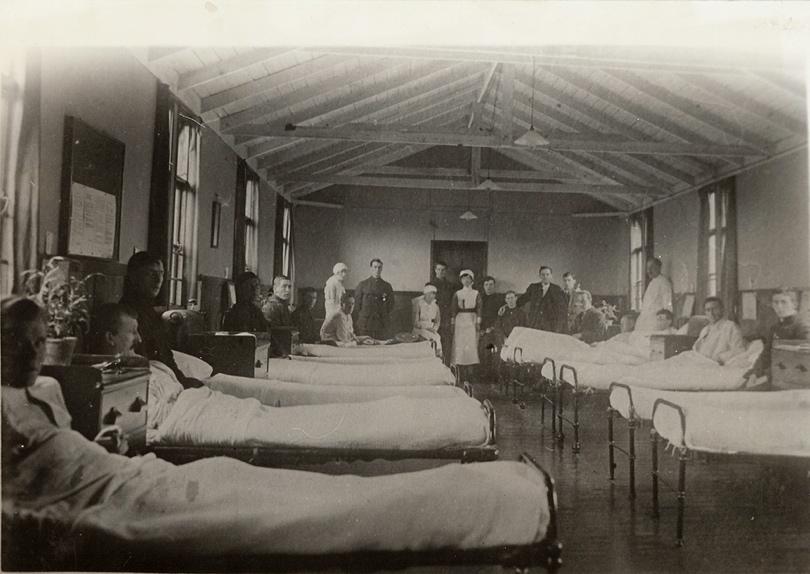 Dr Agnes Barr Auchenschloss was born in Paisley on May 30th, 1886. She graduated from the University of Glasgow in 1911 with a medical degree. At this time, it was rare for women to study medicine and become doctors as they were generally seen as more suited to nursing or midwifery. This played into the gender stereotypes of the time that women were caring and nurturing. However, those who wanted to become doctors often found ways in which they could achieve their goals. Agnes worked in the Royal Alexandra Infirmary in Paisley before being employed at HMF Gretna as a medical officer. Not much is known about Agnes’ specific role within the factory, but it is likely that as a medical officer she was often busy attending to the various injuries that factory workers sustained. It is likely that she would have regularly assessed the health of the workers due to the fact that they were working in close contact with dangerous chemicals. She married Gosta Lundholm in July 1914. He also worked at HMF Gretna and was the Assistant Section Manager of the Nitro-Glycerine Section due to his skills in chemistry. Following the war, Agnes and her husband Gosta moved to South Africa, where Gosta had been working before the war. Whilst there she offered medical aid to local people. Agnes, Gosta, and their two sons returned to Scotland in the 1920s where Agnes joined the Women’s Citizen Association. Agnes passed away on July 4th, 1972, three years after her husband passed.

Dr Peter Murray Carlyle was born on December 10th, 1873, in Dumfriesshire. He studied medicine at Edinburgh University and graduated in 1908. Before working at HMF Gretna he was a local doctor.  Peter married Margaret Gourley Yeats in Edinburgh in 1910 and following their marriage, they moved to Sheffield where Peter worked as a physician and surgeon. Whilst employed at HMF Gretna he was certifying surgeon. Peter was appointed as certifying surgeon by the Chief Inspector of Factories in 1916. This position was a requirement under the Factory Acts and his role was to oversee the health and welfare of the factory workers. However, Peter didn’t just work at HMF Gretna during the war, he was also a part-time unpaid Red Cross Society volunteer where he worked at several Auxiliary Hospitals in Longtown, which is only a short distance from Gretna. Peter was heavily involved with the Ministry of Munitions and was appointed as a medical referee for the Gretna District for the War and Pensions Committee in 1918. Following the war, Peter became a ship’s surgeon in 1930 and passed away on December 4th, 1952.

Dr Agnes Marshall Cowan was born in Edinburgh on April 18th, 1880. She attended the Edinburgh University Medical School and graduated in 1906. Similarly to Agnes Auchenschloss, this was a time where women found it difficult to enter the medical profession as a doctor and be respected by their male colleagues. Following her graduation, she became a house physician at Leith Hospital, then a house surgeon of the eye department at the Royal Infirmary in Edinburgh. Agnes was an assistant medical officer at HMF Gretna from April 1917 to April 1918. Following this she joined the Queen Mary’s Army Auxiliary Corps (QMAAC) and worked as a medical officer. She was also a missionary in Manchuria, China between the wars. She passed away on the 22nd of August 1940.

Dr Lilian Wemyss Grant was born on March 15th, 1873, in Calcutta, India. She was born to parents who were of Irish Catholic decent and were in India due to her father’s job as a career soldier. She studied medicine in Brussels, Edinburgh, and Glasgow. Before working at HMF Gretna, Lilian was a medical administrator at QMAAC Hospital at St Leonard’s on Sea. She was then a Medical Controller at QMAAC Southern Command in Salisbury. In 1917, Lilian was an assistant surgeon at Endell Street Military Hospital, which was a military hospital based in London which was fully staffed by women. Lilian took up the post of Medical Officer at HMF Gretna in May 1918. She then became a military doctor in France in November 1918 and presumably went back to India in 1919.

Kate Evelyn Nellie Johnston was born in Cheshire on March 31st, 1893. Kate did not have any formal education in nursing. This was typical of the time as many medical universities did not offer nursing courses at this time. Kate worked as a nurse in the factory’s hospital. She married her husband, Herbert Walter Twitchin in 1918 in Gretna. He also worked at HMF Gretna as an engineer. Kate passed away on March 1st, 1953.

Sarah Burns McCleary was born on November 2nd, 1887, in Creetown. Before moving to Gretna, she worked as a nurse in the Fleming Memorial Hospital, which was a children’s hospital in Newcastle upon Tyne. Sarah married Alexander Cunningham in Creetown on December 12th, 1916, he was a materials checker at Gretna, and she was employed as a nurse at the Gretna Works Hospital. Following the war, they moved to South Shields. Sarah passed away on January 19th, 1965.

Dr Thomas Goodall Nasmyth was born in Fife on February 28th, 1855. He attended the University of Edinburgh and graduated in 1876 with a Bachelor of Medicine and Surgery. He also gained a Diploma in Public Health from Cambridge University. Before working at HMF Gretna he worked as a GP. Thomas also became the first medical officer for Fife. He was an Administrative Medical Officer at HMF Gretna. It is possible that the role of Administrative Medical Officer at HMF Gretna was made specifically for Thomas due to his background in both medicine and public health. Following his work at HMF Gretna, Thomas became a town councillor for Morningside in Edinburgh. Thomas passed away on the 16th of January 1937.

Dr Robert Wilson Christian Spence was born in Linlithgow on the 16th of August 1884. He came from a family of medical practitioners and pharmacists, with his mother being a chemist and his father being a medical practitioner. Robert studied in Edinburgh and before working at HMF Gretna’s Works Hospital he was house surgeon at Cumberland Infirmary. He was assistant works surgeon at HMF Gretna, and he also worked in a number of hospitals in France and England. Robert passed away on August 8th, 1939.

Dr Gilbert Aitken Welsh was born on the 18th of July 1874 in Edinburgh. His father was a chemist and druggist. He studied at Edinburgh University and graduated in 1898. Before working at HMF Gretna he was a GP in Garlieston, in the Southwest of Scotland. Gilbert was a medical officer at Dornock and along with his family, he stayed in Gretna for some time after the war. Gilbert passed away on July 1st, 1935.

Despite not knowing much about the staff of the Works Hospital at HMF Gretna the work that they did was very important as working in a munitions factory was extremely dangerous and resulted in many people suffering from severe injuries.