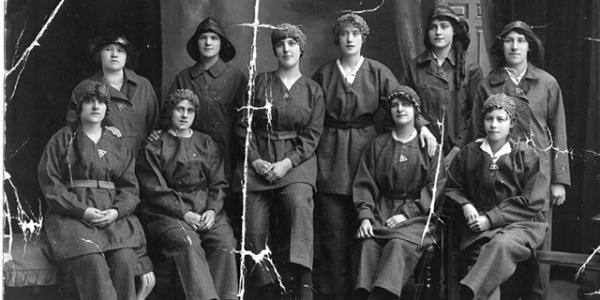 Purchasing this will give you access to recordings from The Devil’s Porridge Museum’s 2021 online conference on the theme of Women in War.

In May 2021, The Devil’s Porridge Museum hosted an online conference on the theme of Women in War.  Over two days, there were six panels with 24 different speakers looking at various different aspects of women in war.  The conference also included a keynote lecture by Professor Angela Woollacottt, author of ‘On Her Their Lives Depend: Munitions Workers in the Great War’ and a performance by Claire Hastings, award winning folk musician, of her son ‘The Gretna Girls’.

If you missed the conference, this is an opportunity to gain access to the recordings, powerpoints and performance.  Within a couple of days of completing your purchase, you will receive an email to a link to access the recordings.  There is no time limit on this and you can access this as often as you wish.  Please do not share the link or make use of any of the recordings without the permission of The Devil’s Porridge Museum.

‘Pitching in’: women hockey players in World War One

Art and artifact: women war artists from allied nations in World War One and Two

‘Two cup finals and then banned for life’: women’s football in World War One

Whatever happened to All Quiet on the Western Front by Erica Remark?

Does she deserve the vote? Women’s First World War Work and Women’s Franchise

Lucienne Boyce, Writer of historical fiction and working on a biography of suffrage campaigner, Millicent Price

‘Singing for our lives’: music, song and artwork from the women of Greenham Common

Henrietta Heald, Author of Magnificent Women and Their Revolutionary Machines: a centenary of the Women’s Engineering Society

Women and the North Eastern Railway in the First World War

‘What claims have such workers upon the country?’ Leeds munitionettes and the problem of demobilisation.

Women on the Railways

Fashioned for War: The Essential Role of Women in the Utility Clothing Scheme 1941-1945

‘The pluckiest little country in the world and the most misunderstood’: Rewriting the Balkans in the First World War memoirs of British medical women.

In the name of the Chinese Red Cross: women’s activism, gender roles and humanitarian relief efforts during wartime (1937-1945)

‘The employment of policewomen is not considered necessary at this time’: Women’s policing in Staffordshire during the Second World War and resistance to it

Great Grandma Barrett was a Shining Women: Reflections on the Radium Girls and Industrial Disease

Scotland’s own Land Girls; the Women’s Land Army during WWII

They Were Soldiers, These Women: A Women’s Army Corps Officer in the Supreme Headquarters Allied Expeditionary Force

‘Anything to Anywhere’: the Women Pilots in the ATA

Liz Millward, Professor of Women’s and Gender Studies at the University of Manitoba, Canada