Donation of board games 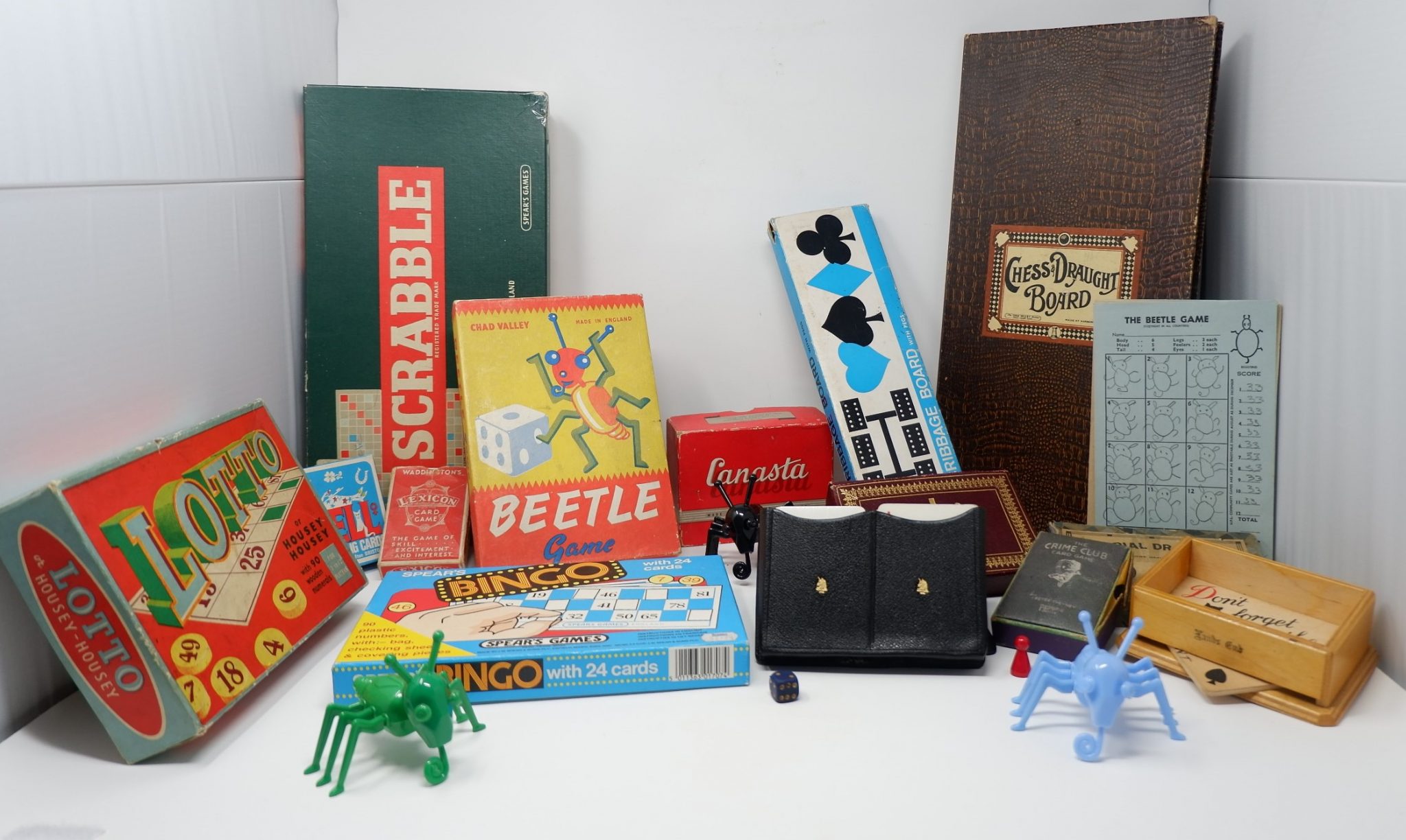 Jack and Ronan have been volunteering at The Devil’s Porridge Museum for nearly two months as part of their Duke of Edinburgh award.  In that time, they have done a lot of work to help re-organise our object store and they have started to work with recently donated objects.  This blog was written by them about a box of old games and board games they found.  We hope to make use of these games in September when we work with a project involving Gretna Primary School – their Primary 1 class is going to be looking at childhood and toys in the past so this will be perfect for them! 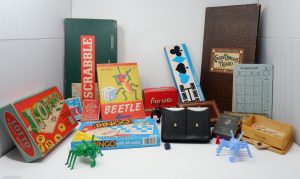 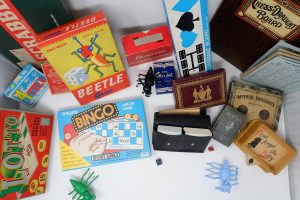 The first game I researched was a game called “Canasta”. I decided to look into this game because it was one I had not heard of before. I found out a detailed history of the game as well as something interesting about the company that made the version in the museum, John Waddington Ltd.

Canasta (Spanish for “basket”) is a card game of the rummy family of games believed to be a variant of 500 Rum. Although many variations exist for two, three, four, five or six players, it is most commonly played by four in two partnerships with two standard decks of cards. The goal of the game is to make ‘melds’ of seven cards of the same rank and “go out” by playing all cards in their hand. Canasta was originally created by Segundo Santos and Alberto Serrato in Uruguay in 1939. In the 1940s the game spread in different variations to Chile, Peru, Brazil and Argentina, where its rules changed some more before spreading to the United States in 1949, where it was then referred to as the Argentine Rummy game. In 1949/51 the New York Regency Club wrote the Official Canasta Laws, which were published together with game experts from South America by the National Canasta Laws Commissions of the USA and Argentina. Canasta became even more popular in the United States in the 1950s with many card sets, card trays and books being produced. The games popularity started to die out in the 1960s but there are still some Canasta leagues and clubs in some parts of the US and South America.

The Canasta set in the museum was made by games company John Waddington Limited, a company who made some variations of monopoly and Cluedo in the late 1940s. Earlier in the first world war, the company was used by MI9 to make special versions of monopoly that would be sent to German prisons by fake charitable organisations and would contain items such as maps, compasses, real money and other items useful for escaping. 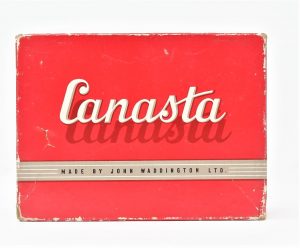 Another game I researched was called Lexicon, which I had also never heard of before. I found out some information about how the game came to be and how it first gained popularity.

Lexicon was basically a pack of cards but instead of the usual symbols on the faces there was letters of the alphabet. A writer named Dave Whitelaw came up with the idea and persuaded Waddington’s to make the game. Originally the game came out in 1932 and there wasn’t much success as the game was quite expensive and relatively unheard of. Then the company took the unprecedented decision to package the game nicer and increase the price. This was heavily criticised and did not help with the popularity. An official release of the game came later and this got the attention of several newspapers who brought in more sales and the game became successful.

The lexicon set in the museum contains a full deck but slightly damaged packaging and does not include instructions. 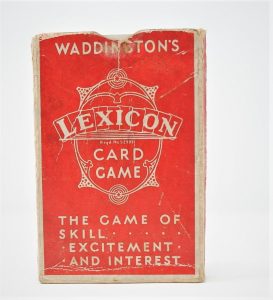 I also researched a game called the Beetle Game, which I had heard of but wasn’t sure about how it worked.

The beetle game is a classic 1960s board game by Chad Valley in England. The game can be played by 2 or more players, and the goal is to construct your own beetle, first to complete it wins. There are 6 parts to the beetle with a corresponding number on the dice. The player must roll the dice and try to get the beetles body firt. Then they must roll the dice and attempt to get every part of the beetle and put it together. The player loses the dice if they fail to throw a number required for a missing part.

The set in the museum includes all parts of the 4 coloured beetles, although one of them falls apart when constructed due to wear. It also includes full packaging and some new and used scorecards. 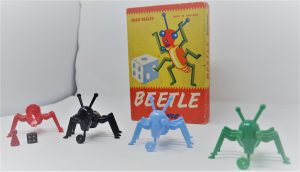 The final game I researched was called Lotto or Housey Housey, and it turned out we also had a more modern version of the game which was named Bingo.

Lotto is a family game of chance suitable for any age range. It uses 90 wooden numerals and the set in the museum can be played with 2-12 players but some sets can go up to 24 players. You are given a card with 15 numbers on it and the end goal is to mark off all those numbers. One player is selected as the caller, and they pick the wooden numbers from a bag and call them out, and if a number called is on your card, you cross it off. Once they are all crossed off, you shout “Lotto!” and the first person to do so wins the game.
There are 2 sets of this game in the museum, one being a more classic style and another named as Bingo that is more modern and has unopened packaging. 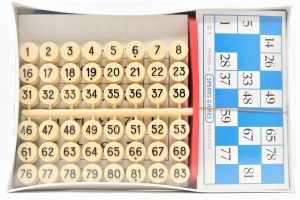 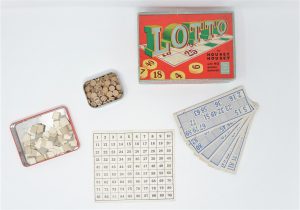 Finally, I tried researching a game called 4-Tell Fortune Telling Cards but I was unable to find anything on that exact set or company. If you know anything about this set feel free to reach out to us. 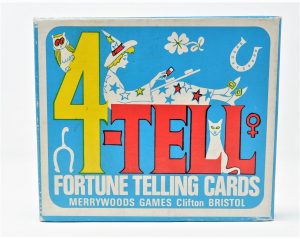 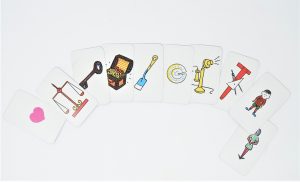 The other games were researched by Ronan and also thanks to him for the photos.
Ronan writes…

The first game I researched was called the crime club card game and was made in 1935 By peter Cheyney.
He was a famous crime writer known for multiple novels. It is missing quite a lot of cards and the box is in bad condition. It is for 2 to 6 players, and it lasts around 30 mins. The game contains 50 cards – 6 suits of 8 cards (split into 3 detective and 3 crook suits featuring characters – such as Hercules Poirot – objects and locations) and 2 jokers. The game is played in two parts. During the first part of the game players collect a hand that will enable them, during the second part of the game, to take as few tricks as possible. 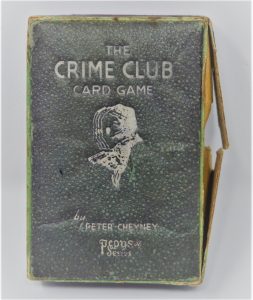 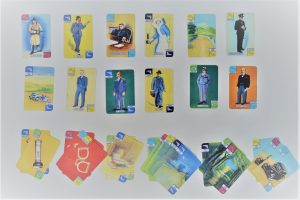