‘Gretna Girl Heroines’ is the headlines that announces an article in The Daily Mirror from 3rd May 1918 of three Gretna Munitions Workers receiving the British Empire Medal from the Earl of Lonsdale for gallant work at Gretna. In the lower left-hand side is a photograph of Miss. Ada Watt, one of the first munitions workers that I’ve researched for the Miracle Workers project at the Devil’s Porridge Museum. Ada received her medal for, ‘courageously staying at her post….and saving many lives.’

Ada Watt is but one of several courageous munitions workers that I have had the pleasure of researching for the project. The other women have included Annie Milne, Ethel Davies, Gladys Carr, Isabella Morrison, and Lily Florence Curle. As a volunteer I hunt through birth, record, deaths, and census records and the British Newspaper Library to try put together an assemblage of these women’s lives from before, during, and after they worked at Gretna. Some research is more fruitful than others with some of the women having a lot of mentions whilst some having no mention whatsoever in both the official and newspaper records.

The most helpful website for this work has been the Scotland’s People’s website with it’s vast array of online, digital records available to researchers. The clear and concise imagery of the various records has enabled me to pin-point information for one munitions worker, Isabella Morrison, who was born 22nd May 1897 near Elgin in Moray-shire.

I have been able to find her birth certificate, marriage certificate and mentions in the 1901 and 1911 census. Isabella married shortly after the end of the First World War and immigrated to Canada with her husband; because I was able to find her marriage certificate, which contained an address she was married from, I was able to use Google Street view to see the actual building which still stands in Elgin. These links with the past is what most excites me as a volunteer with the Miracle Worker’s project as I get to bring back to life women who have been almost forgotten for over a century and may have only been remembered within their own families or local area where they lived. 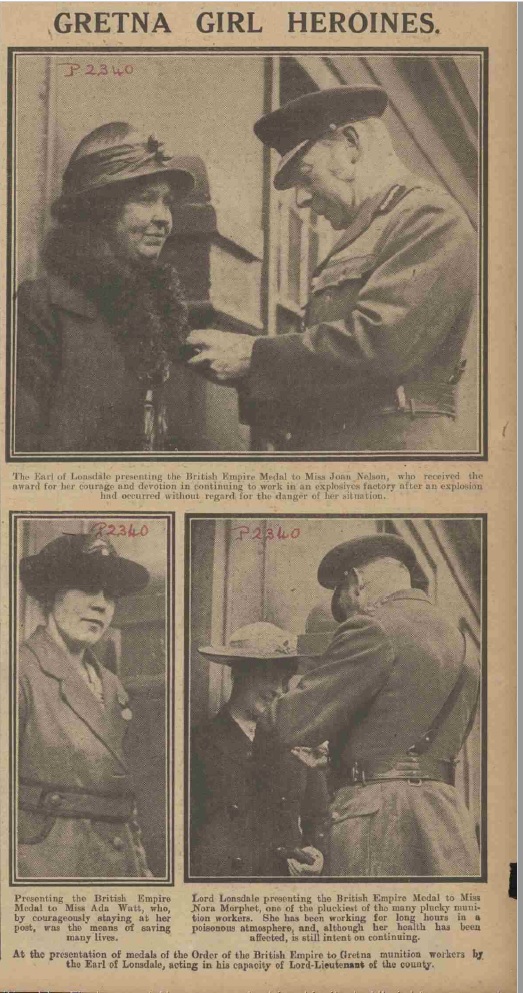 Additionally, the fact that this project and resources like Scotland’s People are available to people who want to volunteer digitally due to the current pandemic or geographic restrictions has enabled me to be part of the larger volunteer project whilst still living in Ireland. I am very familiar with the Devils Porridge Museum and the local area and have visited the museum on several occasions in the past and hope to do so in the future. By engaging with the Miracle Worker’s project, I feel that I can be part of the larger volunteer project and am contributing something worthwhile to the project whilst also gaining new skills in research, writing, and explaining of historical information.