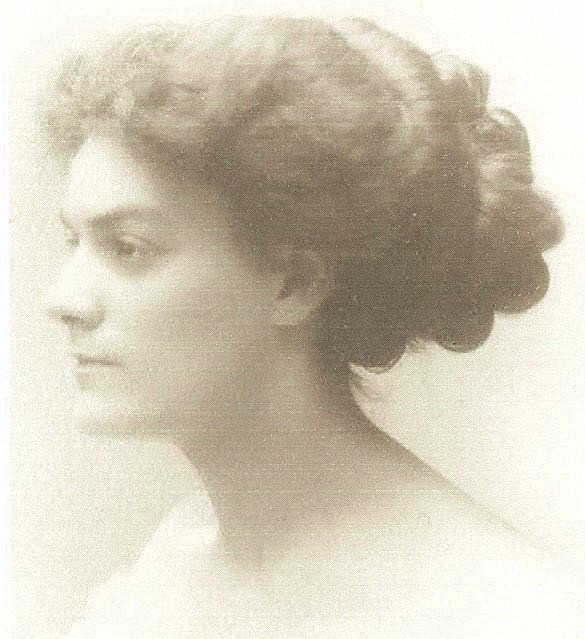 Worker of the Week is a weekly blogpost series which will highlight one of the workers at H.M. Gretna our volunteers have researched for The Miracle Workers Project. This is an exciting project that aims to centralise all of the 30,000 people who worked at Gretna during World War One. If you want to find out more, or if you’d like to get involved in the project, please email laura@devilsporridge.org.uk. This week, Research Assistant Laura Noakes writes up volunteer Beth’s fascinating research into Madeline Ida Bedford.

Poetry was big in World War One. Soldier poets like Siegfried Sassoon and Wilfrid Owen are famous even today. The wonderful Imperial War Museum have compiled a list of nine Great War poets--all of them men. However, women also wrote poetry during and about the conflict. One of these women, Madeline Ida Bedford, was connected to Gretna, and her most famous work is all about munition workers.

Madeline Ida Bedford was born in London in 1884.[1] Her father, Edward, worked as a civil engineer[2], and her parents had married in 1876 in India. Madeline grew up in London with her siblings, Ellen, Alice Mildred, Grace Doris (who unfortunately passed away before her first birthday) and Edward Terence. It appears that Madeline grew up comfortably in a middle-class household—the 1891 census records the family as living at 60 Wood Street in Woolwich and having two servants.[3] By 1911, Madeline, aged 26, was living with her single sister with two servants and is recorded as living off private means.[4]

We don’t know exactly what Madeline’s connection was with Gretna. However, a poem of hers apparently appeared in one of the Farewell magazines produced by staff at the factory. This led the folks over at the Female Poets of the First World War to speculate that she worked at HM Factory Gretna during World War One.[5] However, I couldn’t find the poem mentioned in either of the farewell magazines! I did, however, find one attributed to a ‘M B I’–it might be a stretch of the imagination, but maybe this is a typo and author of the poem is indeed Madeline. 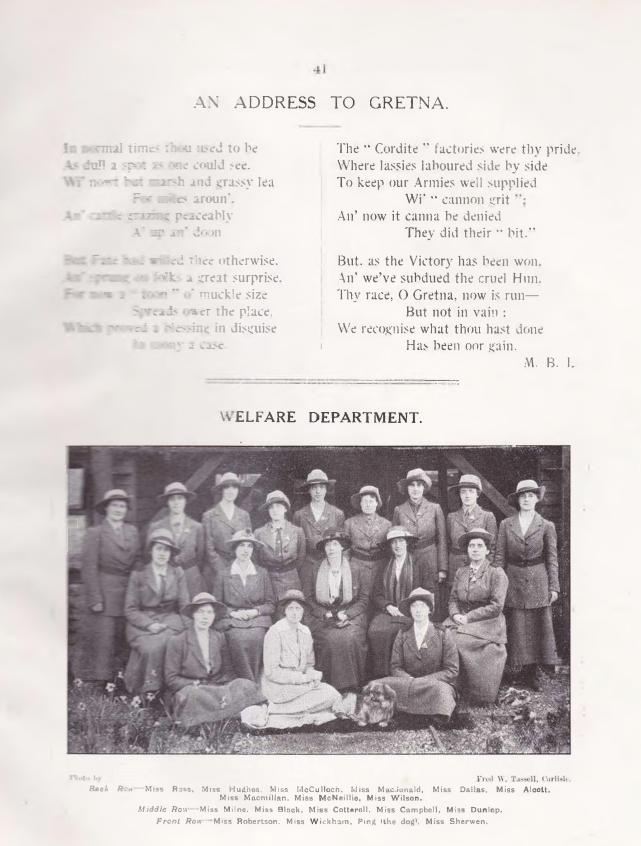 Whether or not she actually did work at HM Factory Gretna, Madeline produced a very popular wartime poem about munition’s workers and their wages:

Yus, Five quid a week.
A woman, too, mind you,
I calls it dim sweet.

Ye’are asking some questions –
But bless yer, here goes:
I spends the whole racket
On good times and clothes.

We’re all here today, mate,
Tomorrow – perhaps dead,
If Fate tumbles on us
And blows up our shed.

I’ve bracelets and jewellery,
Rings envied by friends;
A sergeant to swank with,
And something to lend.

I drive out in taxis,
Do theatres in style.
And this is mi verdict –
It is jolly worth while.

Worth while, for tomorrow
If I’m blown to the sky,
I’ll have repaid mi wages
In death – and pass by.

Sadly, Madeline’s brother, Edward, died in France during the war. [6]After the war, Madeline married in 1919 to Ernest Bolton Morris, who was a Major in the army.[7]  Together they had a daughter, also called Madeline, in 1922. Madeline passed away in 1956.[8]

[1] Church of England Births and Baptisms 1813-1920 for Madeline Ida Bedford, accessed via ancestry.

[2] Info gathered from the 1901 Census for Madeline Bedford, accessed from Ancestry