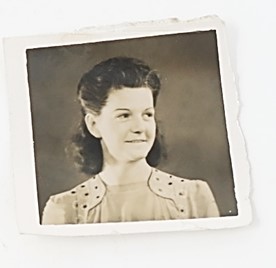 Finlay, a Duke of Edinburgh student has accessioned some recent donations to the Museum and done some research about their origins.  This is his blog…

In the Second World War the government were looking to disperse vital munitions factories across the country to protect them from the German Luftwaffe. They once again looked at the Solway Coast as an ideal place for a munitions factory. Just 5 miles from HM Factory Gretna, Powfoot was chosen as the place to build a new factory, ICI Powfoot.

Powfoot was chosen as a location for the factory as it was an isolated area of farmland with strong rail links and a good supply of water from the Solway Firth. 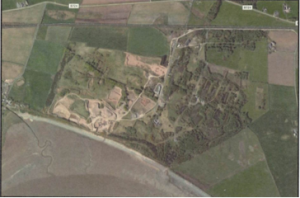 An aerial view of where ICI Powfoot was built

After being built in 1940 ICI Powfoot produced cordite, nitro-cellulose powder and, later on in the site high explosives and other chemicals were made. In charge of production was a team of local scientists.

At its peak ICI Powfoot employed over 4000 people, the majority of which were women attracted by the generous wages and the opportunity to help the war effort.

Working in a munitions factory did not come without danger, for example workers had to face the constant absorption of toxic chemicals that caused skin yellowing, hair and teeth loss. Explosions and fires also were a serious issue in Powfoot and many people were injured or killed in accidents.

Sheila Dalgleish, a 19 year old worker at Powfoot managed to tackle a dangerous fire that could have injured or even killed many people.  When the fire broke out in processing plant (an area in the factory where large amounts of cordite was processed and stored) everyone in the room evacuated, other than Sheila Dalgleish and Euphemia Lindsay. Together, they pulled the bags of cordite away from the fire, then they kept the flames under control with a fire hose until the fire department arrived.

A picture of Sheila Dalgleish.

Her actions then saved countless people’s lives. To thank her she was awarded the British Empire Medal for bravery by King George VI, and the ICI medal for bravery. 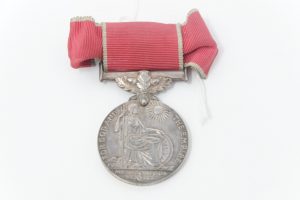 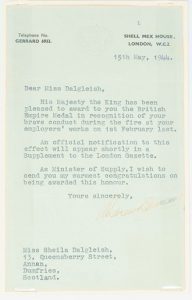 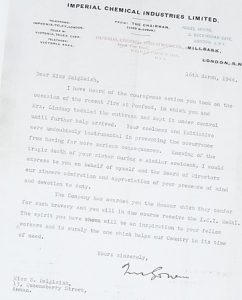