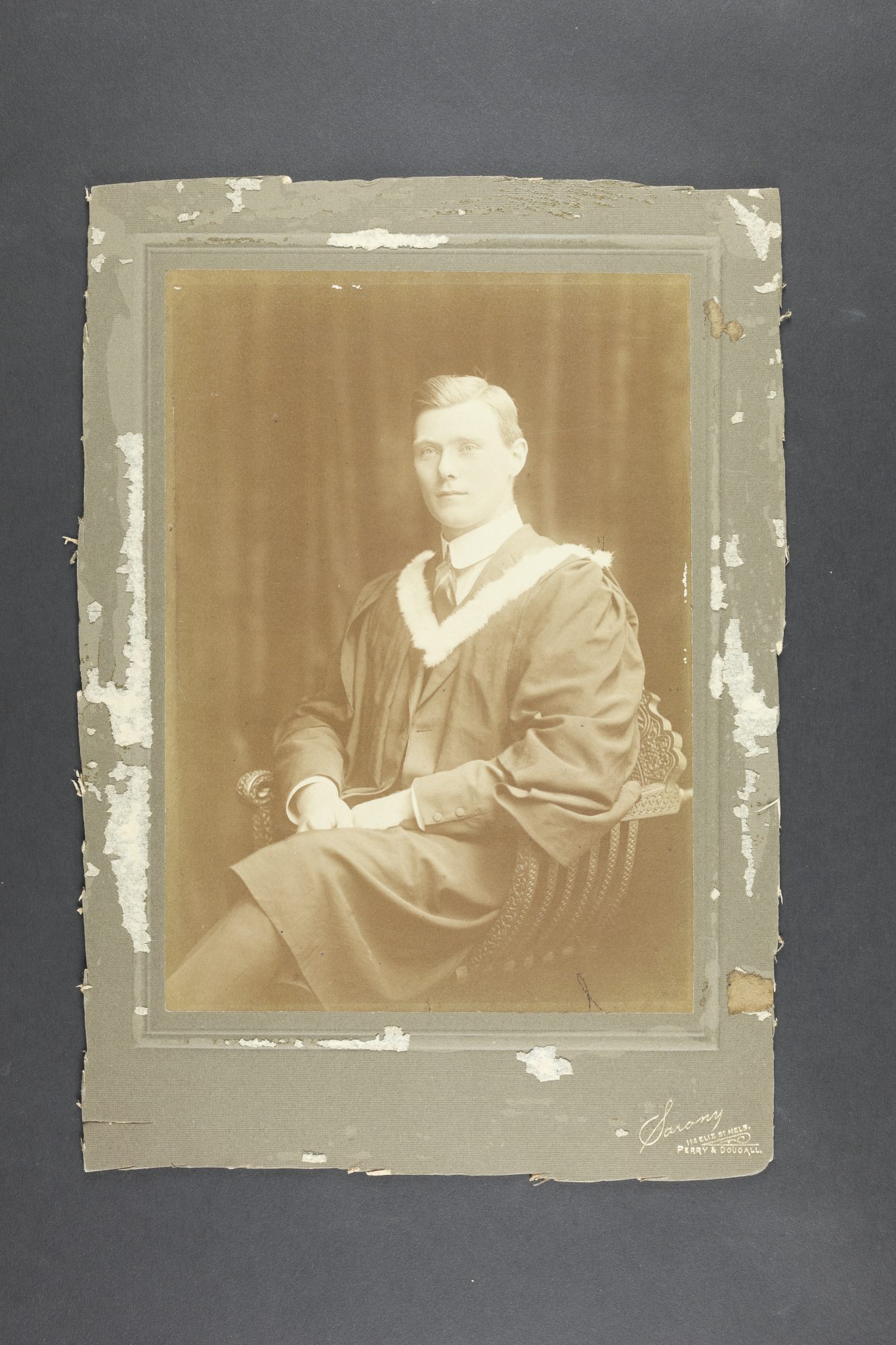 Worker of the Week is a weekly blogpost series which will highlight one of the workers at H.M. Gretna our volunteers have researched for The Miracle Workers Project. This is an exciting project that aims to centralise all of the 30,000 people who worked at Gretna during World War One. If you want to find out more, or if you’d like to get involved in the project, please email laura@devilsporridge.org.uk. This week, Research Assistant Laura Noakes writes up volunteer Beth’s research into Reginald Ezra Parry.

Reginald Ezra Parry was born in 1889 in Adelaide, Australia. His parents, Ezra and Florence, had three boys, of who Reginald was the youngest. Ezra worked as a chemist, and perhaps this is what inspired his youngest son to follow in his footsteps and pursue a scientific career. Reginald studied at the University of Melbourne in Australia, where he was a member of the rugby team. 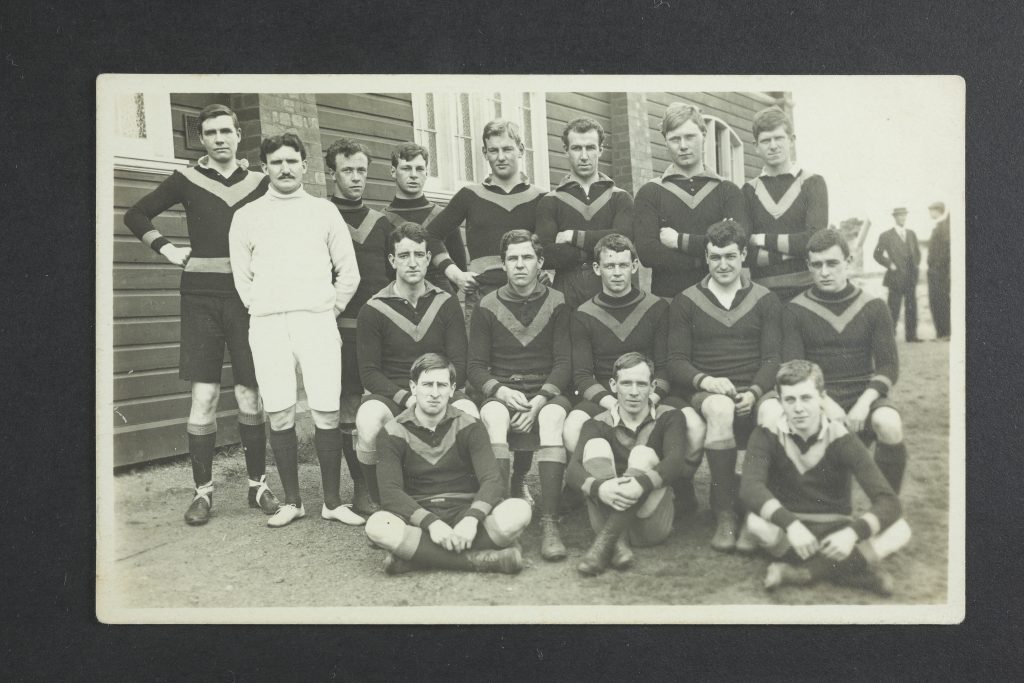 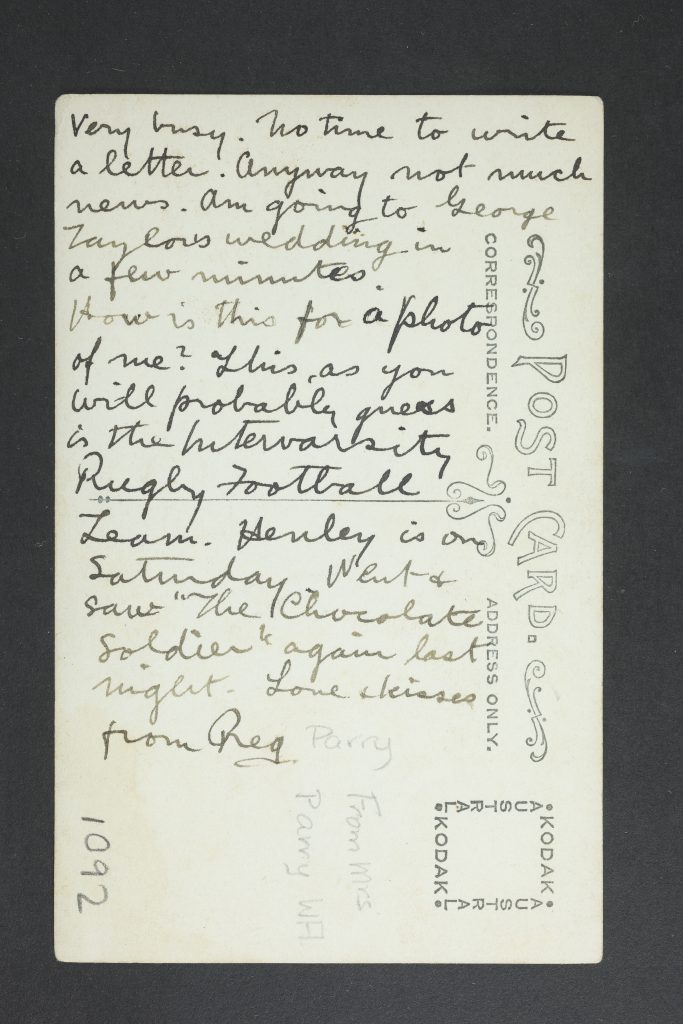 This postcard shows the reverse of the photo of the rugby team. In this brief letter, Reginald states that he is ‘Very busy, No time to write a letter. Anyway, not much news. Am going to George Taylor’s wedding in a few minutes. How is this for a photo of me? This, as you will probably guess, is the Intervarsity Rugby Football Team. Henley is on Saturday. Went and saw ‘The Chocolate Soldier again last night. Love and kisses from Reg.’ Image credit: University of Melbourne Photographs, reproduced with permission

The Chocolate Soldier was an operatta first adapted for film in 1915, which suggests that this letter was written when Reginald was coming to the end of his university studies. He graduated with an M.Sc in that same year. There are some more great photos of Reginald in the University of Melbourne Archives. In the first, he sits in a deckchair. 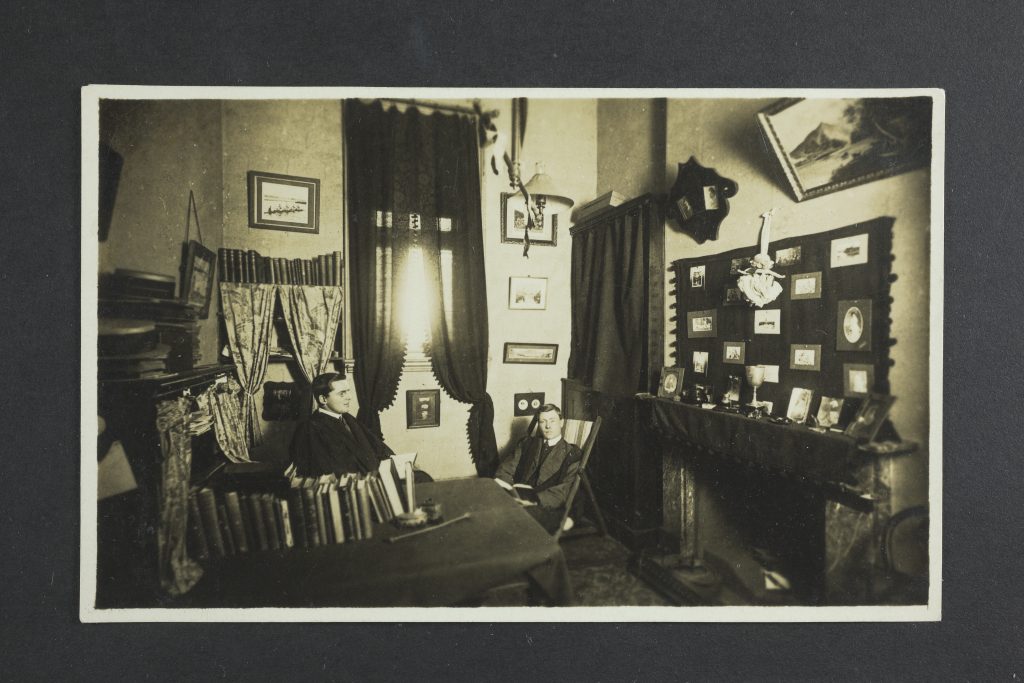 In the second, he is stood reading a book in front of the window, alongside three others: 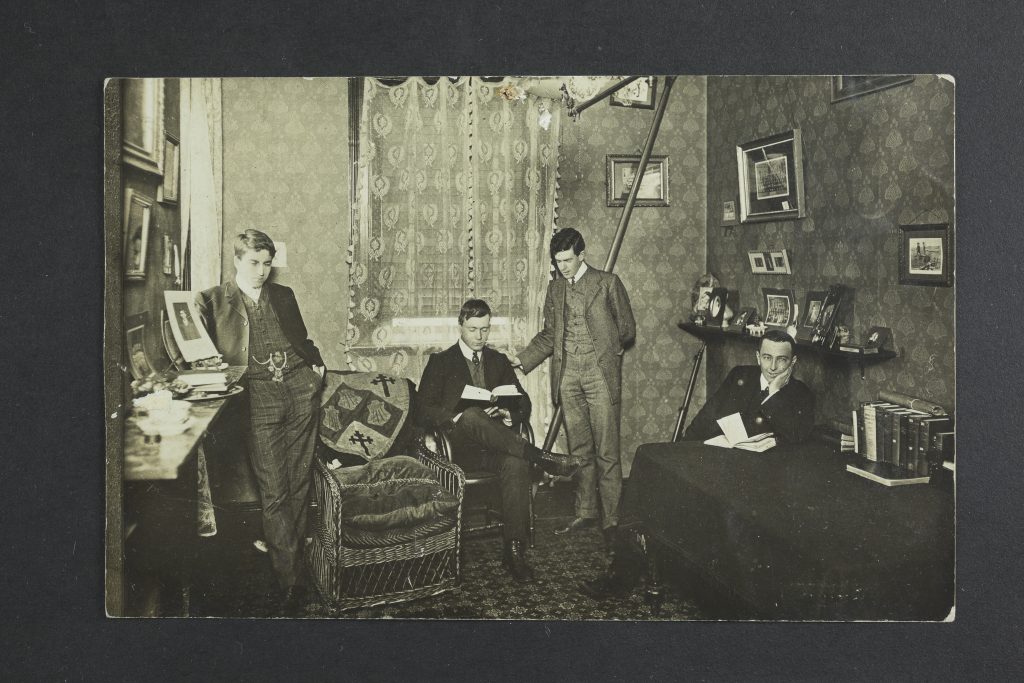 These fascinating photos give us a tantalising glimpse into Reginald’s life at university; he looks very suave and studious in them! Indeed, in an obituary written after his death, it was stated:

‘his life at the time was an interesting and varied one, including considerable teaching experience in chemistry and mathematics, and later metallurgy.’ 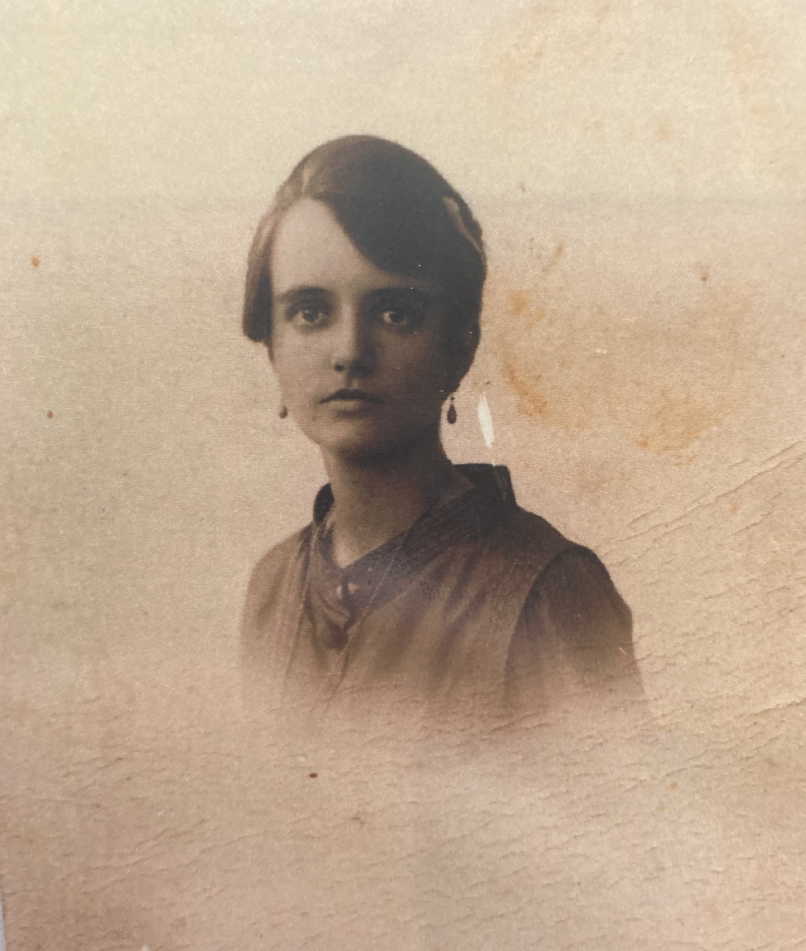 Reginald also married during his time studying. In 1913, in Victoria, he married Avis Blanche Whittington. Avis had been born in Hampshire, England, the daughter of George, who worked as a gardener according to the 1891 census. In 1903, age 14, Avis arrived in Australia along with two of her siblings, Phyllis and Alice. The girls weren’t accompanied by their parents. 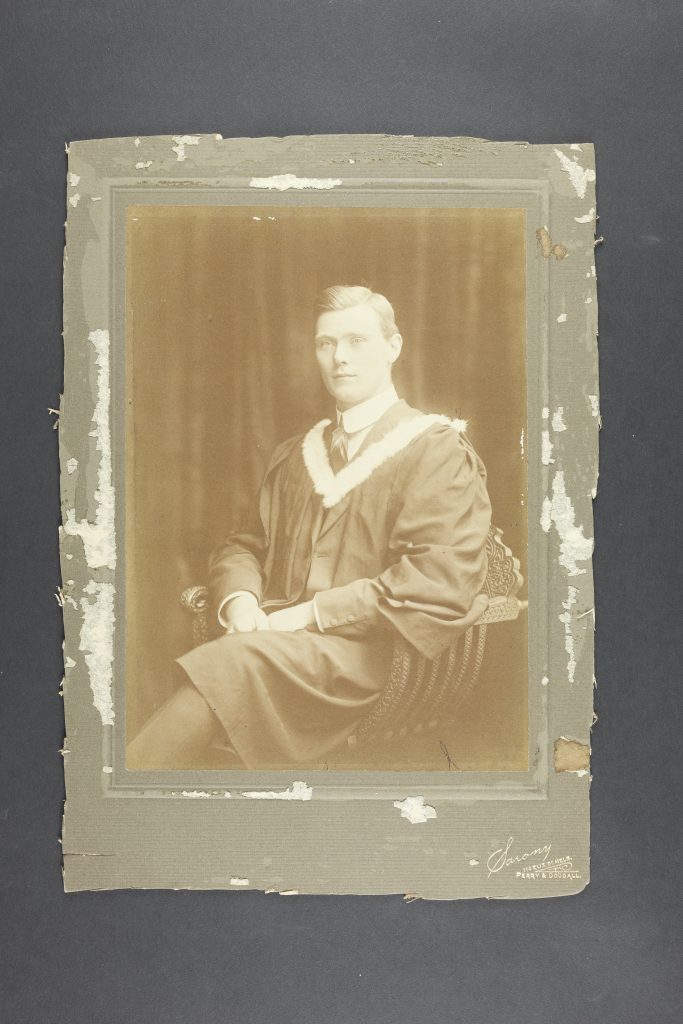 However, having graduated with a chemistry degree whilst World War One was raging, Reginald had skills desperately needed by the British Empire. Like many who lived under British rule, Reginald enlisted in the A. I. F. (The Australian Imperial Force). The A. I . F. was formed in 1914 and was the main expeditionary force of the Australian military during the Great War. As was the case with many Empire chemists and engineers, Reginald was posted to work at H. M. Factory Gretna. 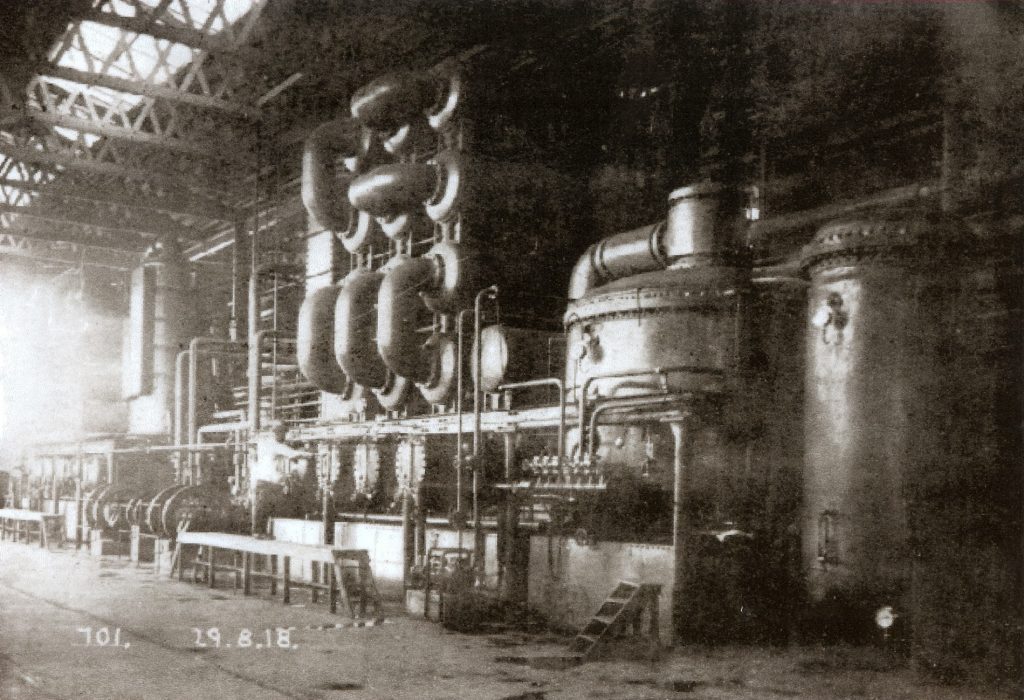 It must have been a huge shock to go from Melbourne to Eastriggs, a small township just over the border in Scotland which had been purpose built for factory workers. Reginald lived at 82 The Rand in Eastriggs, and although we don’t know the particulars of his job, he was working as a chemist. There is one newspaper article which sheds light on Reginald’s time at the factory. In late 1917, according to the Dumfries and Galloway Standard, Reginald pled guilty to being in possession of a box containing matches within the factory fence. This may seem pretty trivial to us, but bringing matches–or anything that could be lit, catch fire, or was metallic–into the factory was an explosives risk. In the Regulations for Factory Employees booklet, given to staff at the factory, it is stated:

‘No person shall bring within the Factory, or have in his possession, whilst in the factory, any match or apparatus for producing light, or any lamp, light or fire of any description.’

Reginald’s charges were dismissed with an admonition. 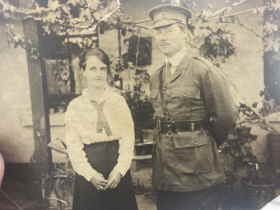 Reginald in uniform, alongside his first wife, Avis.

After the war, Reginald worked as a Research Chemist and Works Manager of a Sandalwood Oil Distillery, before returning to academia in 1925. In 1930, he began working for the Swan Brewery Company Ltd, as a Maltster and Chief Analyst, where he remained until he retired. He was appointed a member of the Institution of Chemical Engineers in 1925, and later elected as a fellow of the Royal Institute of Chemistry.

After Reginald’s wife, Avis, died in 1949, he remarried Suzette Estelle Deane-Ross in the same year. Interestingly, Suzette was a widow of a man who also worked at HM Factory Gretna during the war. She had first been married to Garnett Skuthorpe. Garnett was an alumni of the University of Sydney, and like Reginald, a chemist. He worked at HM Factory Gretna from 1916-1919. Garnett and Suzette had been married in 1909, and had several children. In World War Two, Garnett was again dispatched to England on munitions work. He died there in 1944, killed accidentally in an explosives factory.

I wonder if Suzette and Reginald first met at Gretna? Reginald Ezra Parry died aged 76 in 1966. In an obituary it was written:

‘To all who worked with him or for him, Reginald Parry was the same, very helpful and always ready to lend considerable ability and experience to any problems. His mind remained active and interested long after he had retired from business life and his comments on techniques in almost any industry were informed and accurate, and reflected his very wide reading and experience.’