The builders of HM Factory Gretna 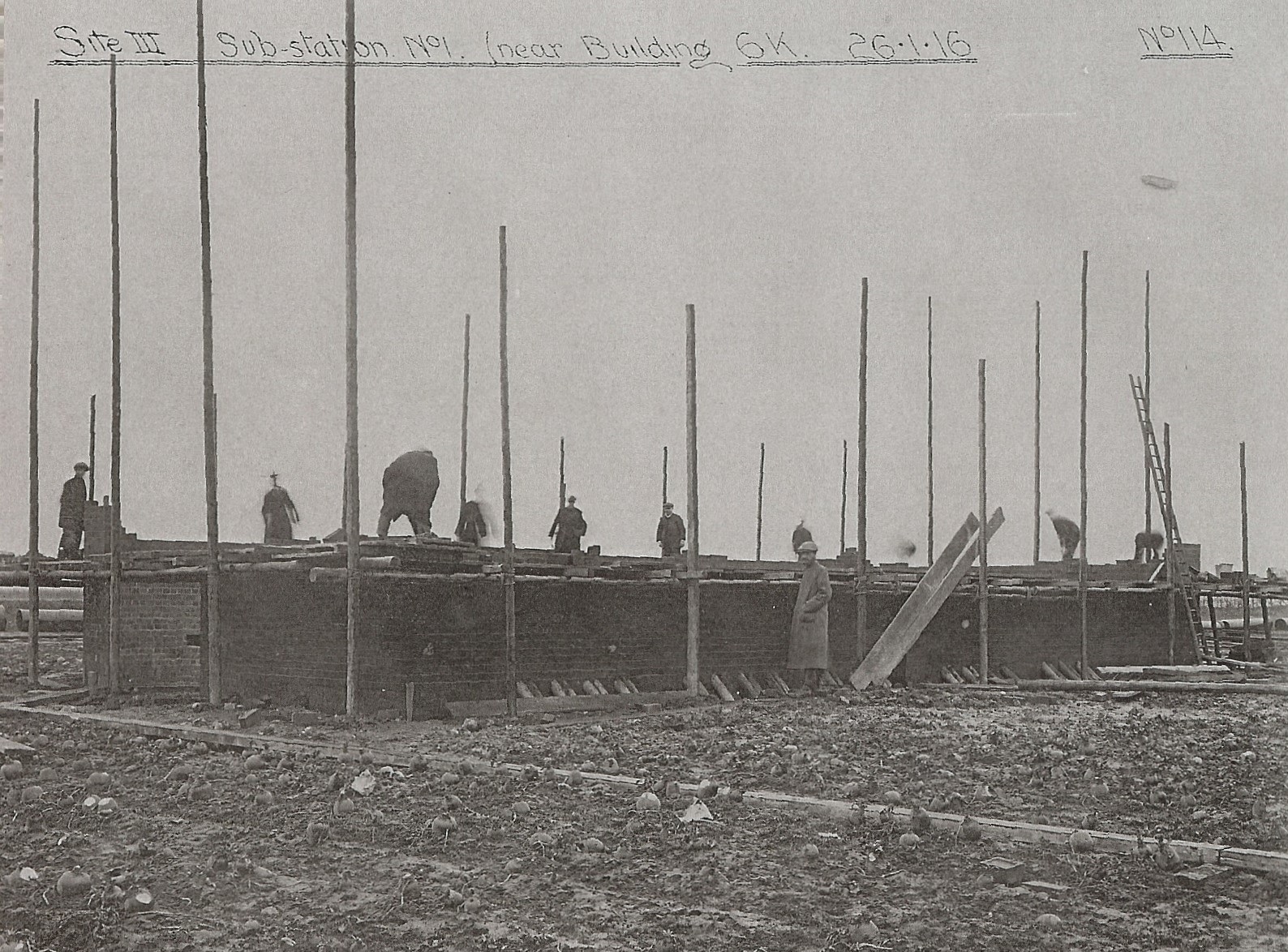 One of the most remarkable things about HM Factory Gretna was the speed with which it was built in World War One.  Construction started in 1915 in response to the Shell Crisis.  There was an urgency about the work done here, the Factory was needed to produce RDB Cordite and to help turn the tide of the War. 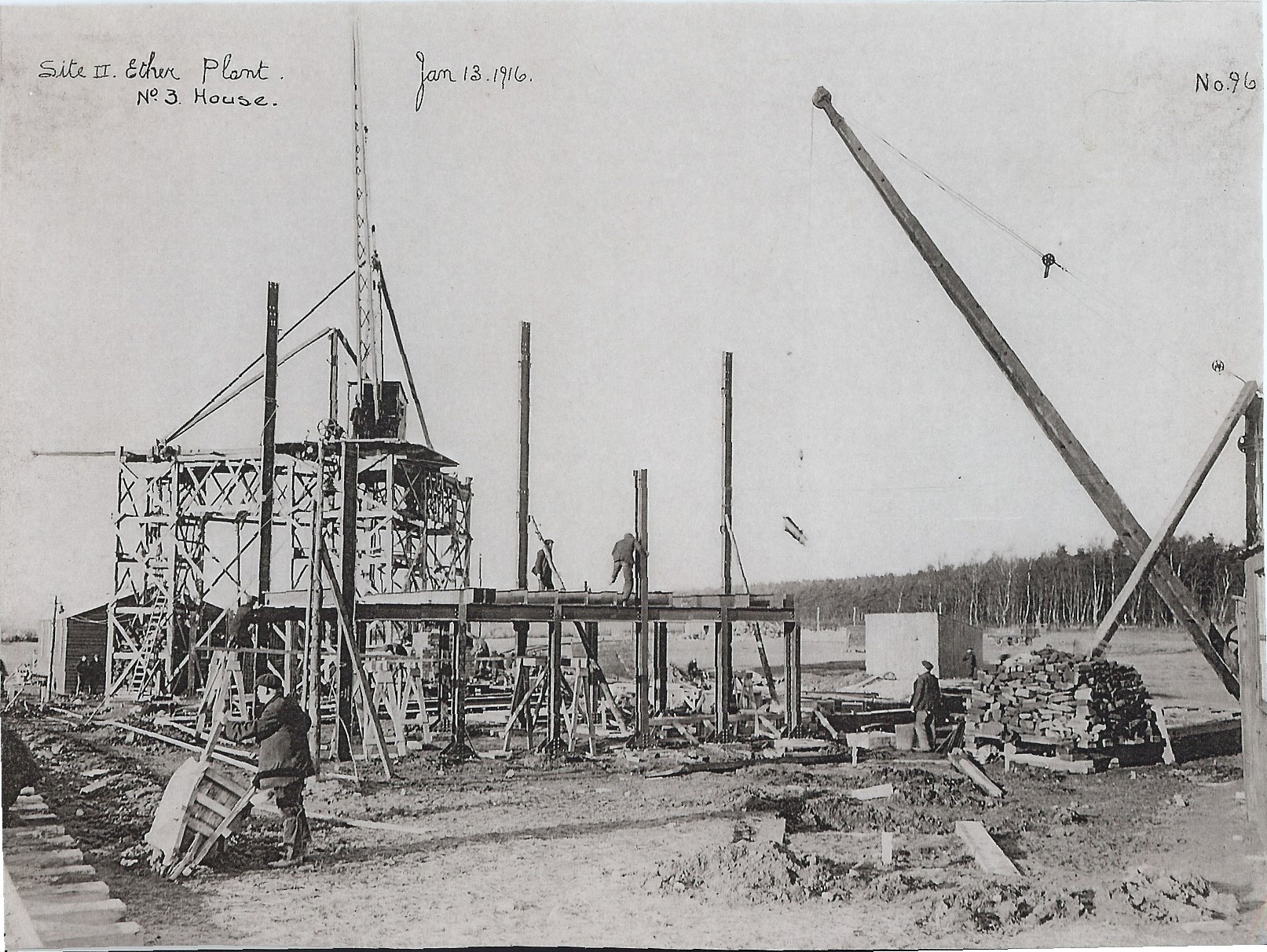 Constructing the Ether Plant in 1916.

The construction work was done by 10,000 mainly Irish navvies.  Many of them would have worked on other major construction sites such as railway lines and canals.  They worked hard and lived an itinerant lifestyle.  For example, we know of one family who were all in Eastriggs during World War One (several of them got married while they worked here) and were later all in Middlesborough by 1921. 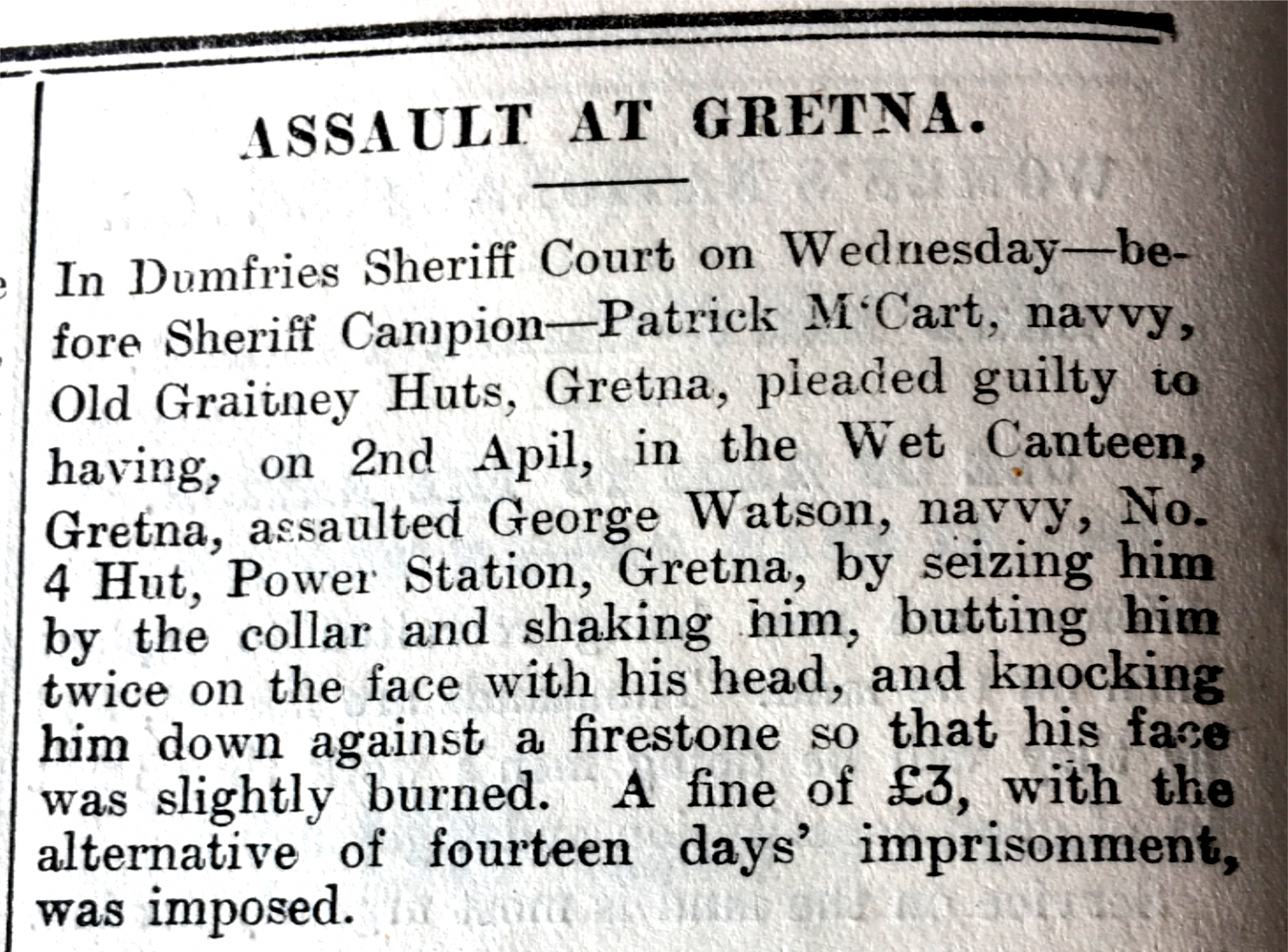 Navvies became associated with anti-social behaviour and crime due. The actions of a few seems to have tarnished the reputation of the many.  This article from the local newspaper is typical of the sorts of crimes which occurred in the early days of the Factory.

Recently, a family history researcher approached the Museum about their family’s connections with the Factory.  They wanted to know more about the role of navvies and to see if we have any documents relating to their family member.  We were unable to find any specific reference to the individuals involved but the researcher found the other information we provided (including photographs of the Factory construction and information about working conditions and newspaper reports very interesting).

They gave us permission to share their family’s connections with HM Factory Gretna here and we are also keeping a copy in our archive of workers.  We are very grateful to them for sharing this information with us. 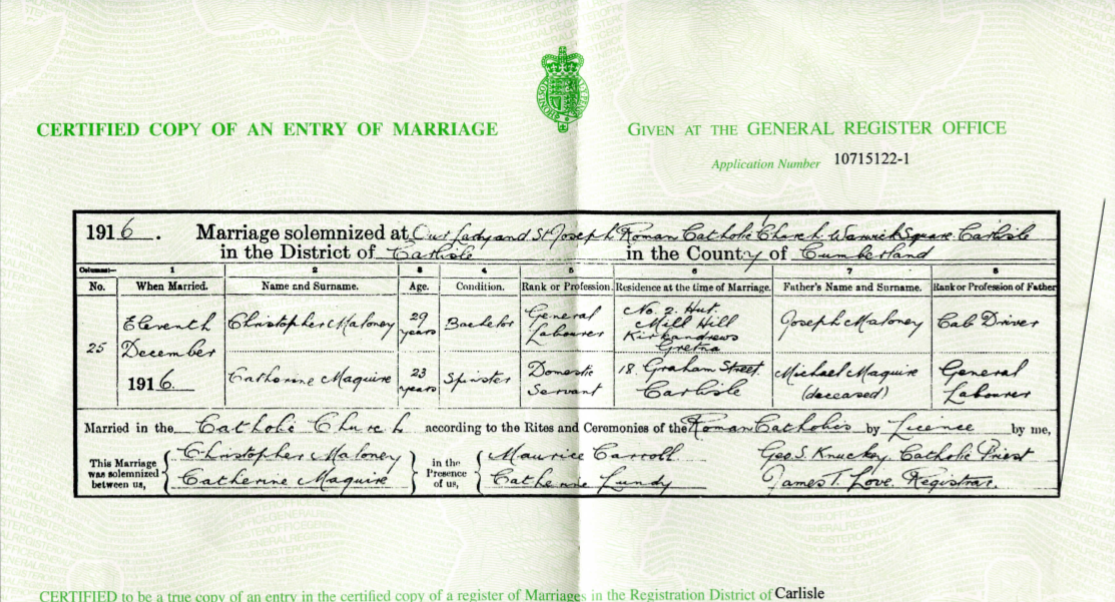 The marriage certificate of Christopher Maloney and Catherine Maguire in Carlisle Roman Catholic Church (many navvies were RC and two churches were built for those of this faith) in 1916. He gave his address as No 2 Hut, Mill Hill, Kirkandrews, Gretna and his occupation as General Labourer.

After the War, Christopher and Catherine Maloney moved back to Ireland and they both died very young of Tuberculosis in 1924.  They left two children who were brought up by their grandmother in Enniskillen, Northern Ireland. 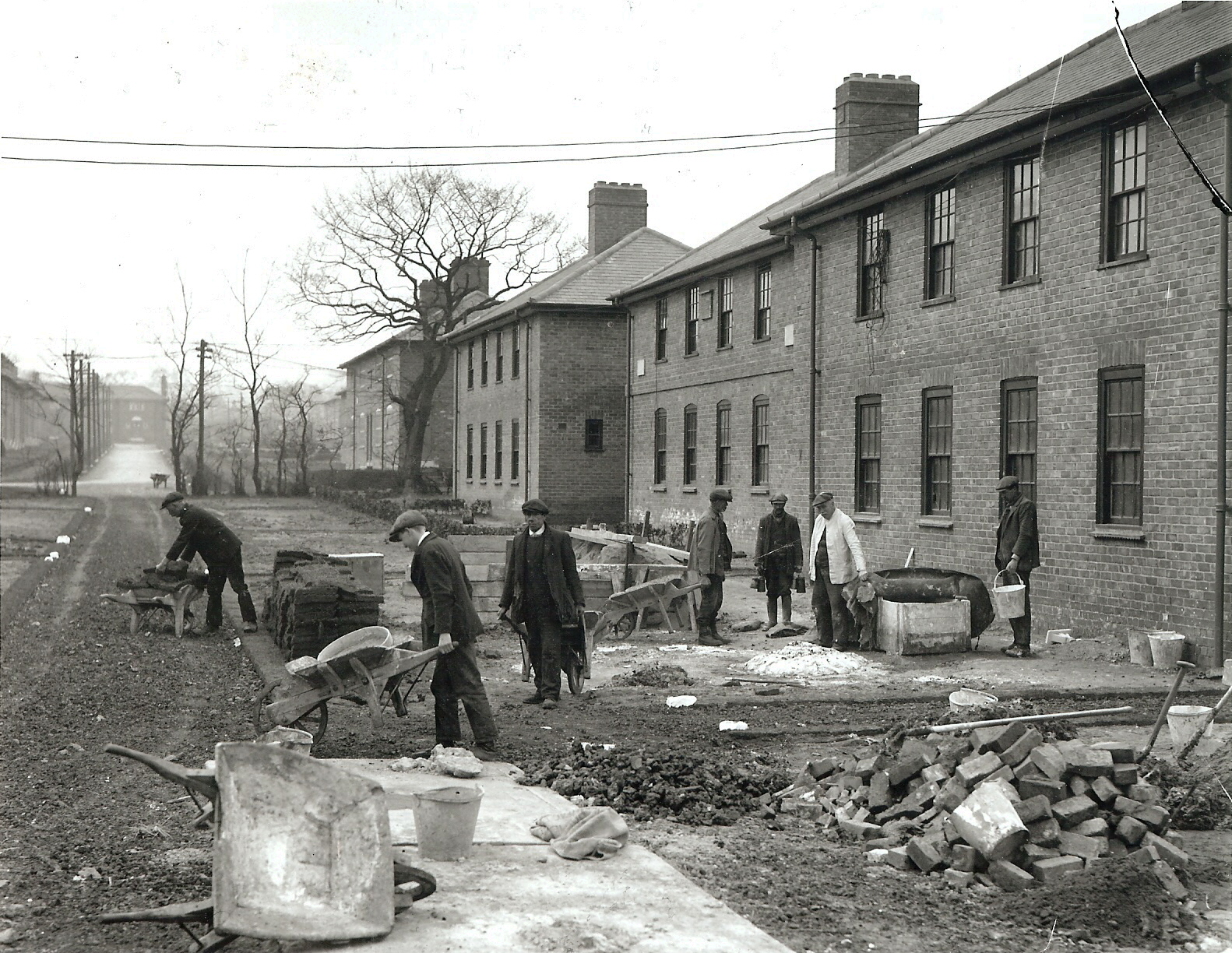 The navvies not only built the Factory but the two townships of Eastriggs and Gretna which were built for the 30,000 workers. 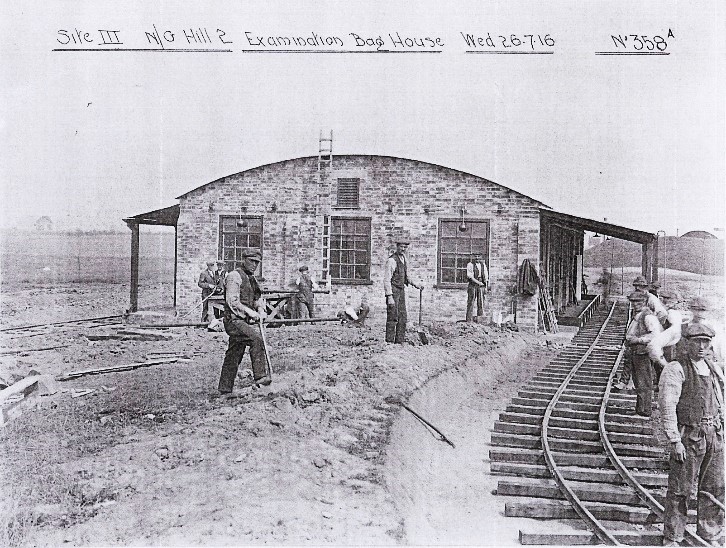 Over a hundred miles of railway track were laid in HM Factory Gretna and 16 railway stations were constructed.

If you enjoyed this article then the following books (available from our online shop) may be of interest to you: