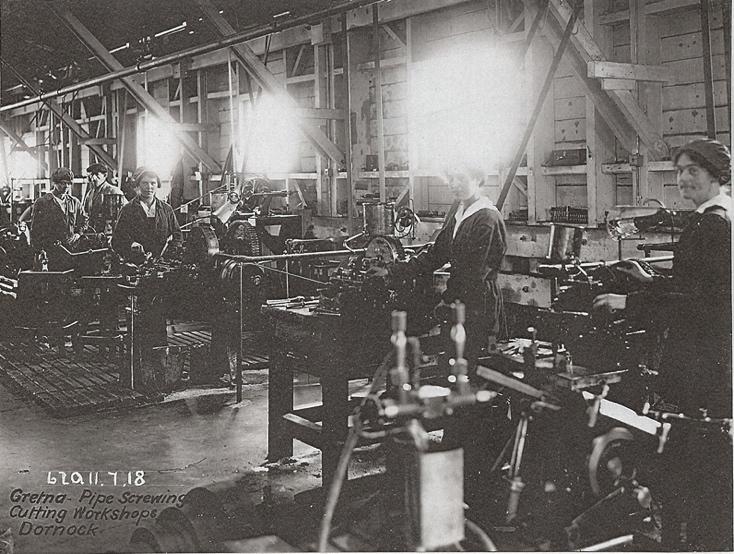 Researched and written by Laura Marley.

The First World War broke out in 1914 and as the war progressed, the demand for ammunition increased significantly. Due to this, in 1915 David Lloyd George, who was the Minister of Munitions, commissioned the building of HM Factory Gretna in order to increase the production of ammunition being sent to British troops in France. Production started in April 1916 and due to the sheer size of the factory, many workers were employed there, including over 11,000 female workers[1]. HM Factory Gretna was the largest munitions factory in operation during the First World War and due to this there was a large workforce of which many would suffer from injuries caused by the dangerous work they did. There was a works hospital on site at HM Factory Gretna which had space for 16 patients. However, a larger hospital was later built which could accommodate a further 84 patients. Between mid-1916 and late-1918, the Gretna Works Hospital had treated 273 male patients and 516 female patients, all of whom were employed in the factory[2]. 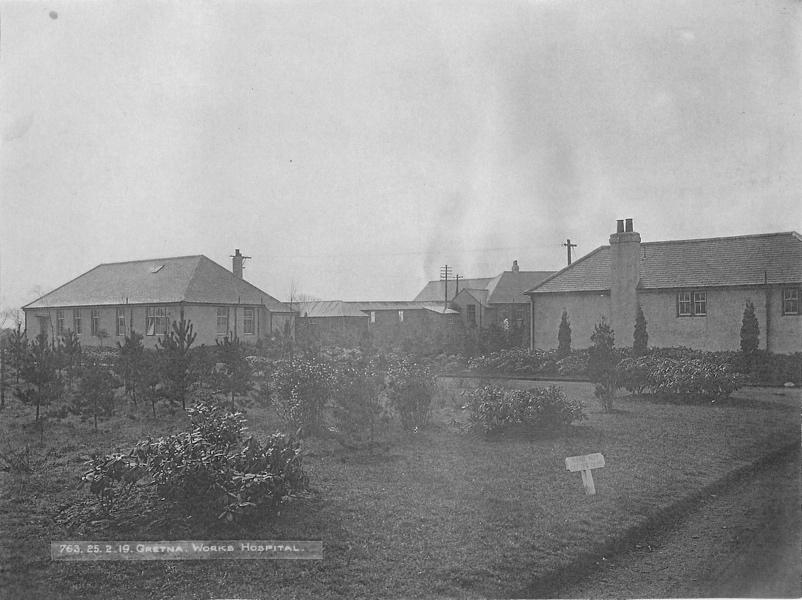 During the First World War, there was not the same health and safety standards that we have in place today so it was more likely that workers would suffer from injury. In terms of injury, we also need to remember that a vast majority of the people working in munitions factories during the First World War had never worked in a factory before so were often severely undertrained for the jobs that they were doing[3]. However, there were government initiatives in place to try and allow more skilled jobs to be broken down step by step, with one worker on each step, so that they were easier to complete[4]. Despite the government’s attempts to reduce the need for skilled workers and make jobs easier for the untrained workers they so desperately needed, many munitions’ workers still suffered from severe injuries at work. These injuries could include losing limbs when using dangerous machinery or suffering from burns due to the high risk of fires and explosions caused by the chemicals and acids that were used in the factory. Working with chemicals and acids also increased the risk of workers inhaling toxic fumes. Additionally, working in a munitions factory could cause long term health problems such as lung problems and skin discolouration.

There were various types of serious injury that factory workers could sustain. We can see from Workmen’s Compensation Claims, that at HM Factory Gretna in 1917 there were a number of serious injuries sustained at work. These consist of 11 workers losing limbs such as fingers or even their arms. 30 suffering from less serious injuries such as bruising, sprains, breaks, or fractures of the hip, knee, or ribs. 15 workers suffered from burns and poisoning due to the acid they worked with and 5 suffered from eye, face, or head injuries[5]

One young woman, Victoria May McIver, lost the lower part of her left arm whilst working with machinery in the cordite section of HM Factory Gretna. This accident happened when she was only 17 and she was one of the youngest patients to stay in the factory’s hospital in 1917[6]. This accident highlights the dangerous nature of the work that many young women took on during the First World War in order to aid the war effort and do what they saw as the right thing to do.

In total, there were 145 recorded fatalities in the factory area, with 115 being male workers and 30 being female workers[7]. This demonstrates the dangerous nature of work in munitions factories and shows that not just those actively involved in combat during the war were willing to put their lives at risk in order to ensure that Britain won the war.

Due to the large amounts of chemicals and acids in use at HM Factory Gretna, there was an increased chance of explosions and fires breaking out. Due to this, HM Factory Gretna had their own fire brigade so that they would be able to get to the fire and put it out quickly[8]. HM Factory Gretna had its fair share of both fires and explosions. On November 15th, 1916, there was an explosion at the factory. Witnesses all reported hearing a gunshot like noise before they saw a fire start. Seven workers were injured in this incident. On December 8th, 1916, one worker was killed instantly due to an explosion, six other workers suffered from bad burns, and some later passed away because of their injuries. Michael Taylor had been working in the acid plant when an explosion happened, he was burned and also fractured his leg. Thankfully he survived but his leg did need to be shortened by 2 inches[9].

Working with chemicals and acid also meant that there was a high risk of workers sustaining injuries from them. These injuries ranged from being sprayed with acid from burst pipes, which could cause burns and even the loss of eyes, to inhaling the toxic fumes given off by the acid which could cause death[10].

There is evidence that the extended exposure to chemicals through working in a munitions factory had long term impacts on the worker’s health. Many of the women who worked at HM Factory Gretna suffered from long term health impacts due to the work that they carried out in the factory. Alice Morton was left with a yellow tint to her skin and as she got older, the yellowness became more noticeable. It could be seen mostly around and in the whites of her eyes. Ellen Stamper suffered from lung problems and sadly died of emphysema in 1955. Margaret Jane Sutherland sadly passed away due to the inhalation of poisonous fumes during her work at HM Factory Gretna[11]. This shows that the work being carried out in munitions factories during the First World War was not just dangerous at the time, but also left many with long term health impacts which were the cause of death in many cases. 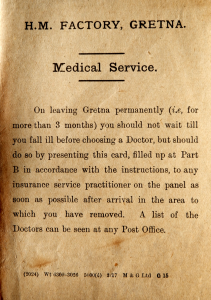 A medical card (pictured above) was given to HM Factory Gretna workers upon leaving the factory ‘for more than 3 months’[12]. The card tells people to choose a doctor as soon as possible after leaving the factory and not to wait until they fall ill. This is essentially warning them that they may experience long term ill health as a side effect of working in a munitions factory. It instructs the ex-worker to present the card to the doctors they are registering with in order to let them know that they have previously worked in a munitions factory. This is significant as it shows that the factory owners were fully aware that the workers were likely to suffer from long term illnesses which were caused by their work in the factory. However, it is unknown how many munitions workers suffered long term illnesses caused by the work they did during the war but there have been a number of reports of people across Britain suffering similar fates to the Gretna workers above, so one has to believe that this was a common after effect of munitions work.

Overall, this article should help you to understand just some of the dangers people faced working in HM Factory Gretna during the First World War. They were willing to work in dangerous conditions with unsafe machinery and chemicals in order to aid in the war effort and do their bit in ensuring that Britain and the Allies were successful in winning the war. Munitions work was a highly important job and without it the war would have been much more difficult.