Worker of the Week: Agnes Muir 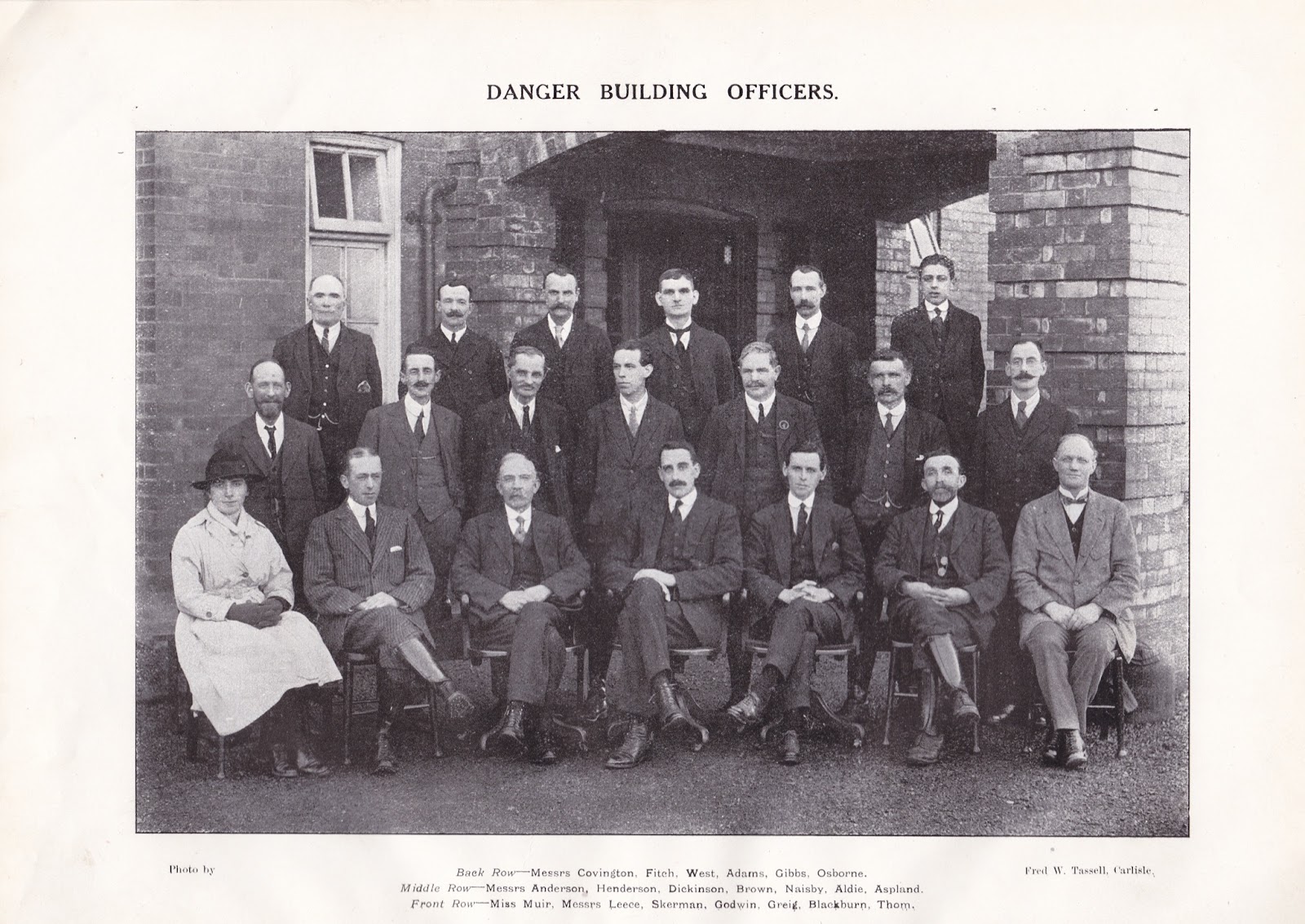 Worker of the Week is a weekly blogpost series which will highlight one of the workers at H.M. Gretna our volunteers have researched for The Miracle Workers Project. This is an exciting project that aims to centralise all of the 30,000 people who worked at Gretna during World War One. If you want to find out more, or if you’d like to get involved in the project, please email laura@devilsporridge.org.uk. This week, volunteer Marilyn shares her research into Agnes Muir.

Agnes Cumming(s) Muir was born in Troon, Ayrshire, on 21st December 1889 , the eldest of seven children to William Muir and Andrina Murdoch Muir. Her birth registration tells us that William was 28, Andrina 27 and they lived at 30, Back Temple Hill, Troon.

Her father, William was born in 1861 in Borgue, Kirkudbrightshire and her mother Andrina in 1862 in Colvend, Dalbeattie, SW Scotland. They married at Colvend on 19th June 1888.

We have an early photograph of the proud young parents with Agnes on her mother’s knee. 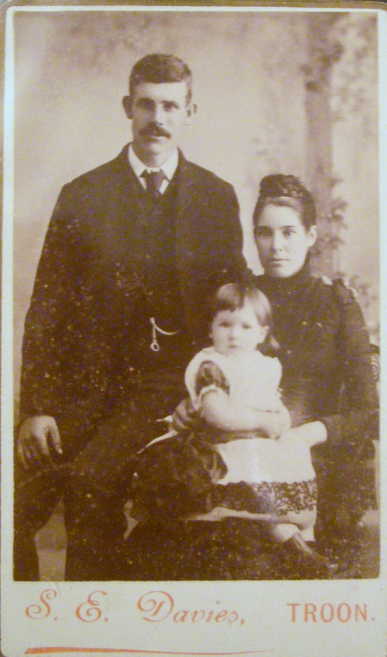 Agnes pictured with her parents.

The 1891 census lists her father as ships carpenter and Agnes as the only child. There is evidence that she was named after her maternal grandmother who died in 1891.

In 1899 7 year old Marian became ill with TB and died aged 9 on 19th June 1901. Her death registration and the 1901 census place the family at 19 Welbeck Crescent, Troon. Marian died of Phthisis pulmanato ( Tuberculosis) having suffered for two years . Marian’s name is on the family gravestone in Troon Cemetery ( findagrave.com) where Agnes’s would be added a few years later.

Having lost a daughter in 1901 and her father in 1900, 39 year old Andrina gave birth to a seventh child, William in 1902 and sadly died the same year. It is unclear whether the birth was a contributory cause of her death.

The loss of their mother left Agnes the eldest daughter at 13 and it is difficult to find any evidence of her activities and life between this point and 1911.

The 1911 census tells us that she was a boarder at 25 Kelvenhaugh Street, Glasgow . She was the only female in the household other than the landlady. The landlady’s three sons and a male 51 year old cousin made up the family members. The male boarders comprised of a police constable with Glasgow Police, an apprentice marine engineer and a blacksmith working at a shipping company.

Agnes now aged 22 was a typist with a law firm. We can assume that some time in the previous few years she had studied or had some sort of training for this role.

For part of 1918, aged 29 , the electoral register tells us that she was still in Glasgow, lodging with the Stirling family at 195, Kent Grove, Kelvingrove, Glasgow. 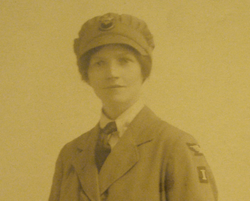 However, the RAF log in the National Archives informs us that on 7th October 1918 Agnes joined the Royal Air Force. Her service No. was 21839. We learn that she is 5’6” tall with grey eyes. The record also tells us that she was discharged on 18th April 1919. Her conduct “ most satisfactory”. The Royal Air Force at the time was newly formed ( Wikipedia).

This period coincides with Miss Muir photographed for the Mossband Farewell Magazine with the Danger Buildings staff – the only female in the photograph. It is not clear whether or not she was the clerical support for the Danger Building Officer team at HM Factory Gretna. Her name certainly did not merit inclusion in the list alongside the male members of the team at the time. 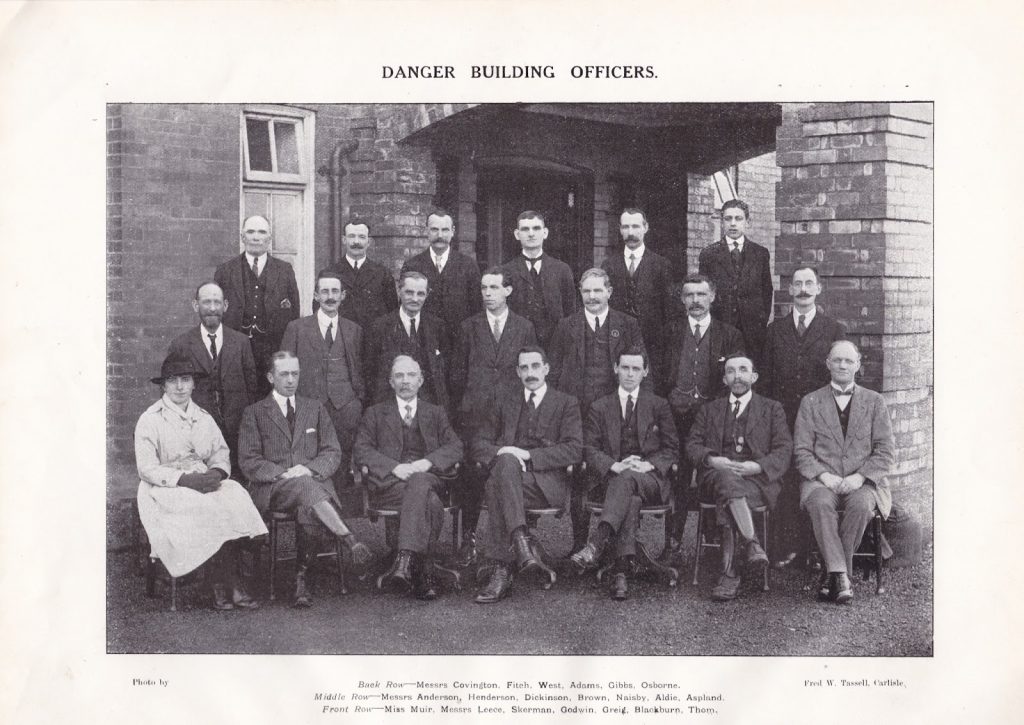 Agnes is the only woman pictured as being on the Danger Building staff.

Probably being at something of a loss after the war, she sailed from Liverpool to St John’s Newfoundland aged 29 on” SS Empress of France” on 19th December 1919. The incoming passenger list for Canada is indecipherable for Agnes’s entry.

We must assume she was in Canada for the whole of 1920 as we find her on an incoming passenger list , Montreal to Glasgow on “SS Tunisia” in 1921 en-route to 19 Welbeck Crescent Troon, arriving in Glasgow 4th June 1921. Her occupation is given as stenographer. The family had not moved house.

It is not clear but very likely that Agnes returned home through ill health. Sadly, she died on 7th November 1923 aged just 33. She died in Moffat which was renowned as a Spa town ( visitscotland.com) and we learn from her death registration that she had Chronic colitis and infective Arthritis. She had been staying at Woodbine Villa, Moffat.

She was buried in the family grave alongside her mother and sister Marion. Her father suffered this additional tragedy and died in St Andrews Drive, Glasgow in 1940.

The additional family tragedy that he did not have to endure was his grandson Scott’s ( son of daughter Jessie Oswald ) death in 1951 when it is reported that as a Guardsman out rehearsing in the heat he fell not his bayonet which pierced his jugular vein . He was 19 ( findagrave.com)