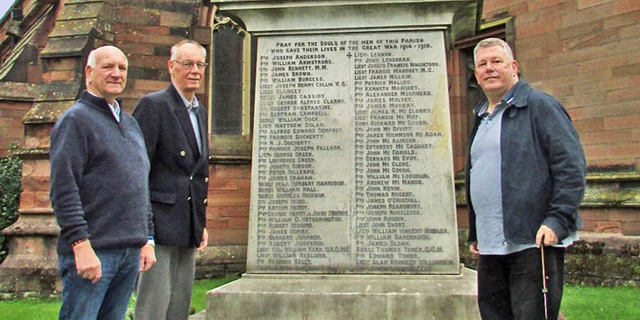 Before the pandemic hit, the Devil’s Porridge Museum used to have a lively and varied programme of events and talks.  We’re now really pleased to be offering these online. We aim to have a talk once a month on a subject which links to local history or the themes of the Museum. All events are free.

Tickets now available for the following. 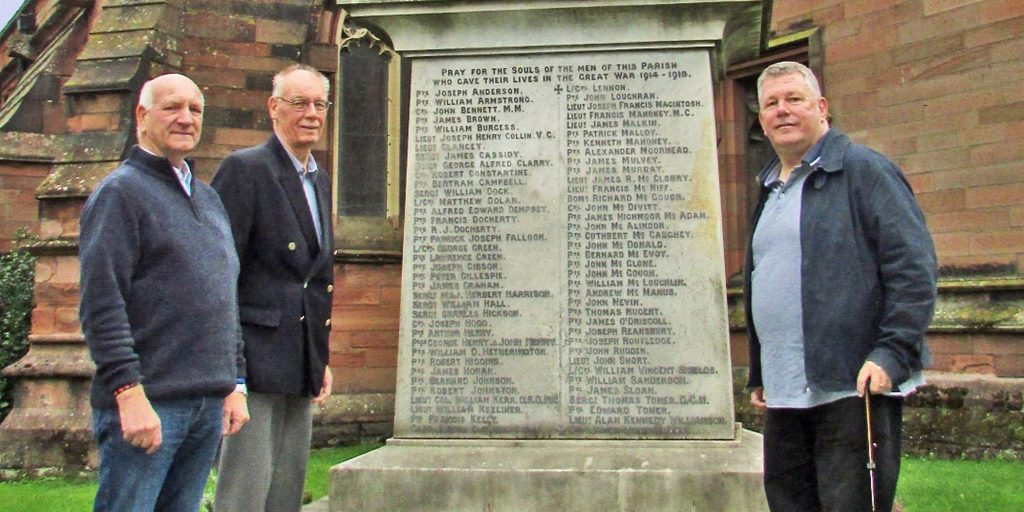 Standing proudly in the grounds of Our Lady & St Joseph’s Church, Carlisle is an 18ft White Marble Memorial bearing witness to the 75 men who fell in the Great War this was our starting point. Little was known of those men, not a sheet of paper could be traced anywhere, some of whom are remembered without their Christian name or initials. Who were they? Where were they from? How old were they? Were they married? Where and how did they fall?

Following four years of dedicated research, the authors’ have been able to painstakingly trace the lives 73 of these lost men all of whom made the supreme sacrifice for their King and country far from home. This book has traced their parents, siblings, careers and sadly the last few days leading to their loss.

Men who came from all walks of life, three made new lives in Canada and Australia, heard the call of duty of the mother country to which they returned to don Khaki. Poignant moments when the Parish Priest announces the loss of a Parishioner to his congregation. The sad letters home, the telegrams that didn’t arrive, the lost and precious belongings that didn’t make it. A son who was only identified by his button, a father who waited for twelve months before his beloved son was traced, men who continue to share a grave. Men who still lie somewhere in foreign fields.

A printer, a farmer, a decorator, a mine owner, a future priest, a joiner, career soldier all are recorded as their young lives become know to us.

Seminarian Francis McNiff shot down over the English Chanel on his first flight; James Murray who was discharged, for ill discipline, from the navy then joined the Army using a false name; Arthur Henry was imprisoned for being underage, before being returned to Carlisle.

Many who died with their most precious possessions in their pockets.

These compelling personal stories, and how they were unravelled, are contained in over 80,000 words and over 200 illustrations and graphs and are the subject of Derek’s illustrated talk. 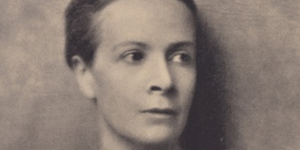 ‘A Kind of Twist’: The Troubled Life of Stan Harding

Constance ‘Stan’ Harding is one of the twentieth century’s most curious, eccentric, endearing, often infuriating, and – sadly – long forgotten figures.

Born into an affluent but deeply religious family in Canada in 1884, she fled at the age of nineteen to Florence. Here she mixed freely with expatriate artists and bohemians such as Käthe Kollwitz, Mabel Dodge, John Reed and Edward Gordon Craig. She enthralled and appalled in equal measures—‘a poisonous little snake’, as one jealous rival called her, in this ‘Paradise of Exiles’.

Her Florentine escapades were only the prelude to a career that soon witnessed her working as a journalist, first in Berlin during the Armistice and the Spartacist Uprising, then in Bolshevik Russia. This latter stint ended in 1920 with her imprisonment as a spy in the notorious Lubyanka Prison, having been betrayed by an erstwhile friend, the American traitor Marguerite Harrison, who spied for the Russians against the Americans and British. Following her release, Harding spent the following decade consumed by her pursuit of vengeance against Harrison before new pastures beckoned in India, where she worked as a filmmaker and photographer.

A century after the plight of Stan Harding was front-page news around the world, this talk will introduce this ambitious and indomitable woman who, in advance of her time, worked as a foreign correspondent in the dangerous world of international politics. 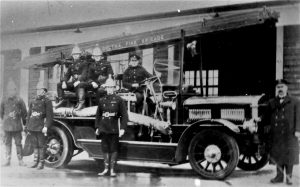 Nearly a decade! Fires and Firefighting at HM Factory Gretna

Our presentation begins in October 1915 with the builders discussing fire insurance with HM Government and then we travel through to September 1925 with a large fire at Gretna just a few days after the brigade had been disbanded. Our journey will include looking at the men and women who fought fires, took part in competitions and ensured the safety of H M Factory, Gretna. We’ll see the vehicles, stations and uniforms used. Likewise details and photographs will show the diversity of incidents including travelling miles to assist local communities in areas where proper fire fighting apparatus and crews did not exist or were rudimentary.

Gretna had different levels of fire teams ranging from the professional brigade through to the assistance offered by police officers, both male and female, military guards and officer workers. Within the factory area, all workers received basic training whilst others more in depth instruction. Some of these workers showed exceptional bravery and quite correctly were presented with awards and we’ll look at these.

Unfortunately any explosive factory was a place of danger and accidents fatal and causing injury were common place. However that the workforce and residents in the purpose built townships and other accommodation also suffered from house fires and accidents including those caused on the railway and road. Ambulances based at fire stations attended to the injured, taking casualties to hospitals in Dumfries and Carlisle if the medical facilities within the factory could not cope.