Members of the Women’s Police Service at HM Factory Gretna 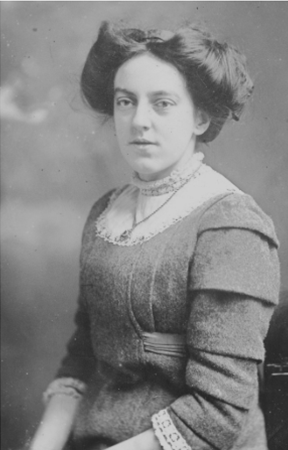 12,000 young women were employed to work at HM Factory Gretna during World War One (The Devil’s Porridge Museum tells the story of this amazing factory and the people who worked there).  Over 150 police women were also employed to help supervise the female workforce.

This is the second in a series of blog posts about women police, to read part one see: https://www.devilsporridge.org.uk/womens-police-service-at-hm-factory-gretna

We don’t always know very much about the women who worked at HM Factory Gretna (sometimes we don’t even know their names) but we do know a little more about the members of the Women’s Police Service (WPS).  They signed a letter/petition to Winston Churchill so we have many of their names (more on this in a future blog), we have some good photographs of them, we know where they stayed and we know a little about their training.

One family member also provided us with this invaluable account of Mabel Farrer, who was born at Braithwaite in Cumbria and was a member of the WPS at Gretna during the War.

“Auntie Mab was one of the first women appointed to the then new Women Police Service in 1916 by Damer Dawson herself. Her training in London under Dawson and Commandant Mary Allen’s direction comprised ‘a small amount of military drill and a few visits to Police Courts, and we were sent in our sweet innocence to improve the moral tone of Piccadilly Circus and Leicester Square’!  Rules were strict though and education and compassion were guiding aims as the Women Police had very little powers other than those conferred under wartime legislation. 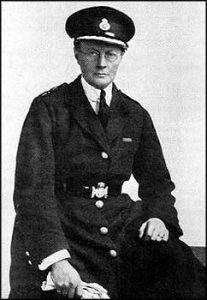 After this basic training, Mab was sent to Gretna and became the one of the first female policewomen there starting work in January 1917. Her pay was £2 a week  and she was provided with all uniform. After one year’s service she was given an addition 1/- a week boot allowance, and at some time during this period, she was promoted by Dawson to the rank of sergeant. 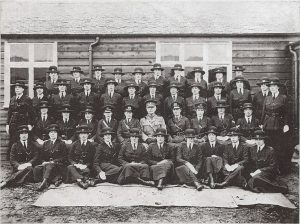 Members of the WPS at HM Factory Gretna,

At the time, Gretna had huge munitions factories and included the new townships of Gretna and Dornock, and there was an enormous female population working in the munitions factories for the war effort.  Other women police trainees followed and eventually there were [up to] 170 Women Police there. One group of policewomen had charge of the factory gates and kept up a constant patrol inside the danger areas and in the townships where most of the workers lived. They also escorted the trains full of female workers to and from the factory (mainly from Carlisle) and had to take numbers of sick girls home after their work hours, most of them suffering from ‘the effects of the special nature of their work’. (It was a criminal offence for workers to leave their employment in the munitions factories). 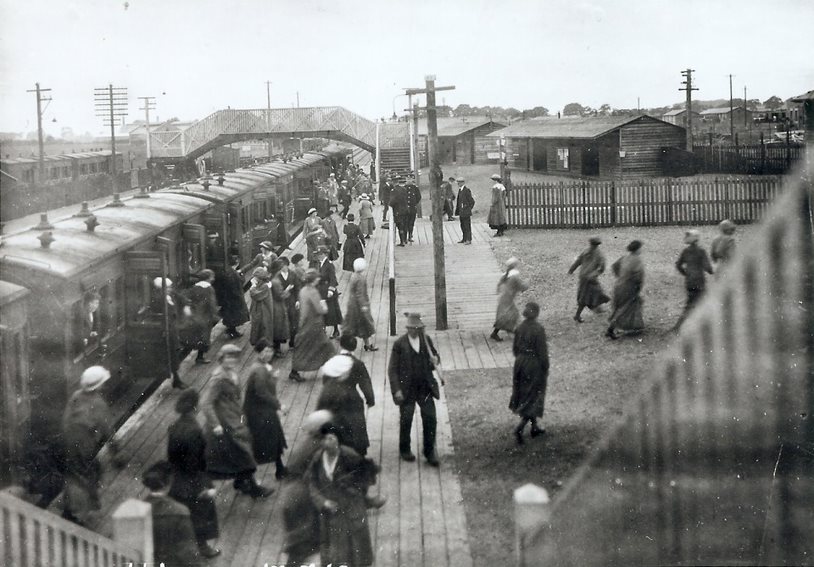 If you look carefully at this photograph of workers at a Factory station, you can see members of the WPS on the platform (they’re wearing long skirts and hats).

The policewomen also searched all workers going in and out of the factory, on entering to ensure they did not take in metal or other articles which could cause an explosion if brought into contact with machinery and on leaving, ‘for any factory property to which they had become attached’! 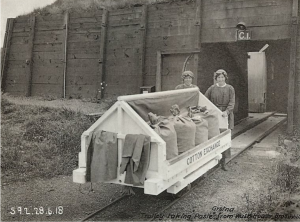 Women working in the Factory. Like many other observers of these young women during the War, Farrer commented on their cheerfulness.

She notes ‘It is surprising how little one remembers of two busy, happy years but one cannot forget those cold still nights walking alone between the buildings where high explosives were being manufactured at top speed. We rarely spoke to anyone except when we met a truck loaded with cordite, gun cotton etc being pushed quickly by two very young girls from one dangerous building to another. These youngsters usually sang at their work and if we greeted them with ‘it’s a rough night for you’ they would reply ‘it’s worse for the boys and they continued to sing of the ‘little grey home in the west. 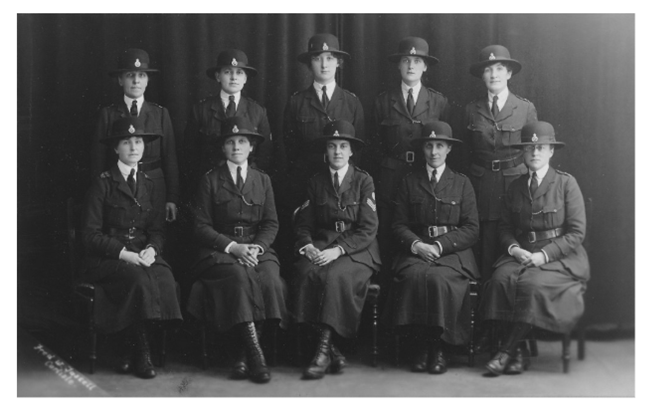 Mabel Farrer photographed while working at HM Factory Gretna. She is seated in the centre of the front row.

She reported to three people! Although employed by the Women Police Service, she was sworn in as a ‘Special Constable’ for Dumfrieshire, Cumberland and the City of Carlisle. Part of the time she was in Carlisle itself in charge of a group working there and when there she reported to the Chief Constable. But she also reported to the Women Police Service office in Gretna. However she was paid by the Ministry of Munitions which had been set up by the Munitions of War Act 1915. She continued to be paid by them until the end of the war.

Mabel’s name appears on a valuation roll record from Gretna along with the names of other female police officers.

At the end of the war, British Police were just beginning to appoint women to their ranks and in October 1918, Northampton Police Force appointed its first two female police officers and Auntie Mab became the fourth to be appointed in December 1918 with the rank of ‘Police Constable’ with Powers of Arrest and her name placed on the roll of Court Officers.

Uniform was provided and comprised navy serge tunic and skirt over riding breeches and a military type navy overcoat. No shirts, ties, or gloves were supplied until some years later. Hours of duty were generally 8 and pay was £2 a week and no additional pay given for overtime. Policewomen were employed almost exclusively working with women and children and this included ‘women found wandering, neglected children, suicides, searching female prisoners, attending court, taking statements, indecency complaints, escorting female prisoners to jails etc’ and she also notes taking them to Dover and Holyhead for deportation. She also had to visit cinemas and read the synopses of films reporting to the Watch Committee suggesting a private viewing if considered too explicit.

She served at Northampton for 28½ years retiring in June 1947 with the rank of Sergeant and with a pension of £182 per annum. You no doubt remember she then lived with Auntie Flo and Uncle Maurice at 24 First St, Chelsea. After Uncle Maurice died, they moved to Newcastle.”

Our next article on the Women’s Police Service at HM Factory Gretna in World War One is coming soon.

If you would like to know more about women’s work at HM Factory Gretna in World War One, the following books from our online shop might interest you: