Today is the 58th anniversary of Doctor Who; the longest running Science Fiction TV show. To celebrate The Devil’s Porridge Museum’s Digital Marketing Apprentice, Desray has written this blog post. 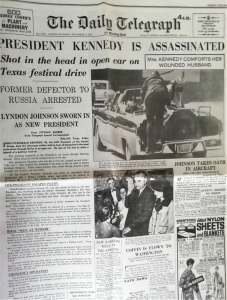 Front Page of the Newspaper from 1963.

When helping the museum’s other SVQ students re-organize the museum’s collection, I was delighted to a copy of The Daily Telegraph newspaper dating from the 23rd November 1963. 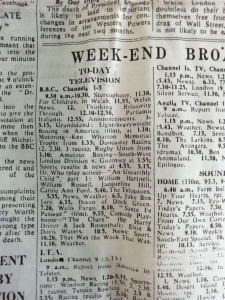 ‘Week-End Broadcasting’ section of the newspaper.

The headline of the newspaper (and much of its content) is quite rightly dominated by the shocking news of the assassination of 35th American President, John F. Kennedy the day before. This is a very impactful and significant event, but I instantly became distracted by a section on “Week-End Broadcasting Programs.” Under that day’s listing was none other than the first episode of Doctor Who.

This episode followed schoolteachers Ian Chesterton (William Russell) and Barbara Wright (Jacqueline Hill) whose concerns about their student, Susan Foreman (Carole Ann Ford) led to an adventure starting in a scrapyard, which neither of them was quite expecting. In fact, the schoolteachers would not find their way back to London for a couple of years to come (or 1965 to be more exact). 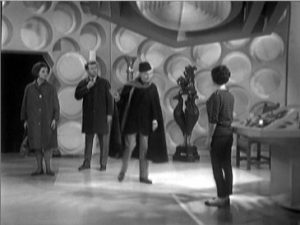 Cast of the An Uneathly Child on set and in character. From the left Jacqueline Hill, William Russell, William Hartnell and Carole Ann Ford. Source: Fair use, https://en.wikipedia.org/w/index.php?curid=4718425

The first incarnation of The Doctor was played by William Hartnell, who is also mentioned in the newspaper.

This first broadcast of Doctor Who program received relatively low viewing figures. Largely, this was due to the shock of the John F. Kennedy’s assassination. Power cuts in part of the UK are also likely to have influenced these viewing figures.

Fortunately (and very unusually for the time) the first episode of Doctor Who was repeated before the following episode, the next week. This secured much better viewing figures.

Sydney Newman was the initial creator for the sci-fi program and the Head of Drama at BBC Television at the time. He intended the program to be educational with information about science and history. Additionally, he wanted there to be “no bug-eyed monsters” like in other science fiction. 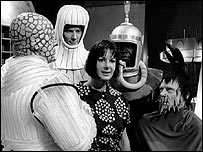 Veritiy Lambert on Doctor Who Set. Source: By BBC, Fair use, https://en.wikipedia.org/w/index.php?curid=16924758

She played big role in ensuring that arguably some of the TV program’s most iconic aliens appeared on the program and therefore securing its popularity.

Donald Wilson, the Head of Serials and Verity Lambert’s superior advised against the use of Terry Nation’s scripts which introduced the daleks. Sydney Newman also strongly disapproved of the daleks, which are likely to have fulfilled his idea of “bug-eyed monsters.”

However, Verity Lambert believed in the script, and it became the shows second serial. When the storyline aired it was very successful, so much so that another serial featuring the daleks was released the following year (‘The Dalek Invasion of Earth’). The daleks were very popular, so much so that ‘Dalekmania’ ensued, and they continue to be one of the most well-known aspects of Doctor Who today. 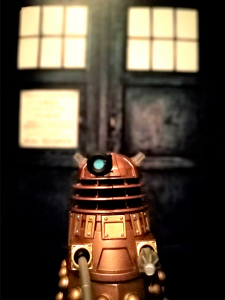 A Dalek in front of the TARDIS from Doctor Who.

Verity Lambert stayed as the Doctor Who’s producer until 1965 when she moved on to produce other shows created by Sydney Newman for the BBC. She then went on to produce and work on many things in the entertainment industry, including the BBC series Jonathan Creek.

In 2002 she was even awarded an OBE for services to television and film production. 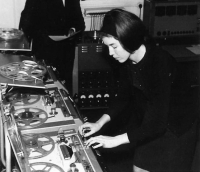 Another person who had a huge impact on Doctor Who is pioneering Delia Derbyshire. Although the theme tune for the program was composed by Ron Grainer, it was realised and utterly transformed by Delia Derbyshire. In fact, Ron Grainer didn’t recognize it when she first played it to him.

The theme tune was created before computers and synthesizers were in wide use, which meant it was very time-consuming and precise work. She had to record individual sounds onto tape, adjust the pitch of each note separately and splice them all together to create the music at the BBC Radiophonic Workshop. The resulting theme tune was rather unique and unlike what had been heard before.

Although Ron Grainer tried to credit her as co-composer of the theme music, Delia Derbyshire was not credited on-screen until the shows 50th anniversary in 2013 (‘The Day of The Doctor’).

Sadly, she died in 2001. She has been awarded a posthumous honorary doctorate for her pioneering contributions to electronic music, by Coventry University in 2017.