Worker of the Week is a weekly blogpost series which will highlight one of the workers at H.M. Gretna our volunteers have researched for The Miracle Workers Project. This is an exciting project that aims to centralise all of the 30,000 people who worked at Gretna during World War One. If you want to find out more, or if you’d like to get involved in the project, please email laura@devilsporridge.org.uk. This week volunteer Marilyn shares her research into Marcella Charlotte Forbes.

Marcella Charlotte Forbes was born in Malta in 1875 to John Forbes , Quartermaster major in the 1st Battallion 42nd Highlanders, Black Watch and Louisa Marcella nee Couch, daughter of a builder.

Marcella was the third of seven children born to John and Louisa between 1869 and 1886 and was named after her maternal grandmother Marcella Charloltte . Louisa was born in Madras , India which is where we can assume she met John, 14 years her senior. They married in Bengal on 4th February 1867 when Louisa was just 17 and John 36. John hailed from Moulin, Perth. Census return for 1861 give his early career as a bank clerk.

Their first child, Annie Emily was born in India in 1868 . They must have moved to Edinburgh within the year as Eleanor Maude Marcella Forbes arrived on 5th July 1869, her birth registration stating that she was born at Edinburgh Castle. This 19 year old young mother had 2 daughters. Contradictory information tells us that John enlisted in September 1873 , maybe he was in a different regiment or military position prior to that.

His posting took the family to Malta where Marcella Charlotte was born in 1875 followed by a fourth daughter Gertrude H in 1879. 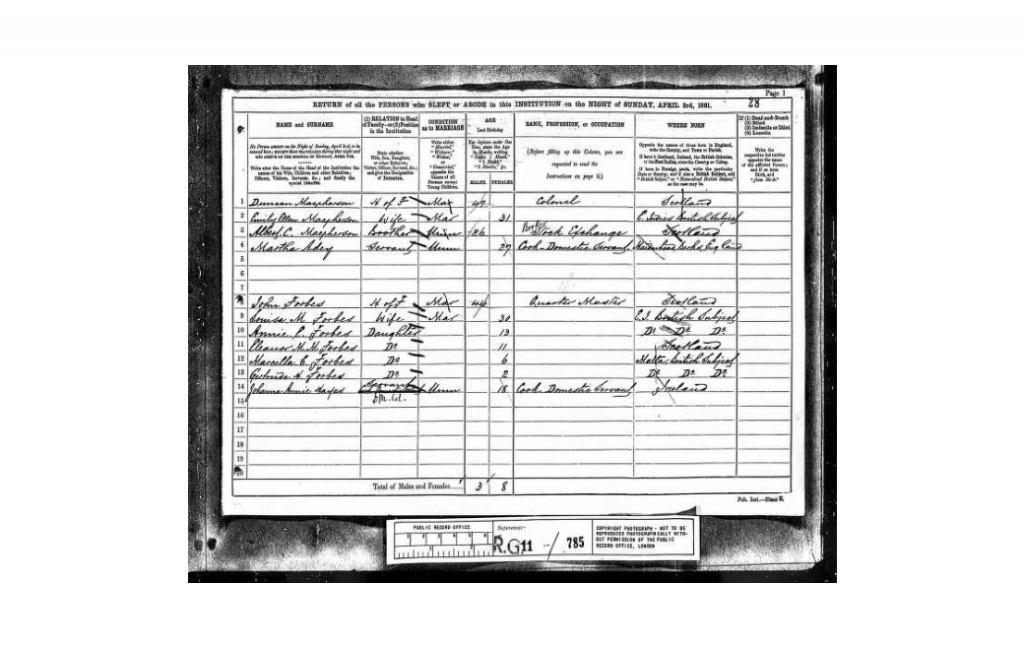 On return from Malta, the 1881 census has the family living at Aldershot Barracks, John’s role is Quartermaster. By 22nd November 1882 they were in Edinburgh when Henry Maurice was born at 21 Scotland Street ( birth registration )

1884 saw the arrival of Gilbert Athole and finally in 1886 Beatrice Georgina Frederica was born, both at 18 Belle Vue Crescent, Edinburgh. Their father is shown as retired on both registrations. He possibly retired at 50.

The 1891 census return places the Forbes family at yet another Edinburgh residence- 69 Morningside Drive. John is 54, Louisa 40, Anne E 23, Eleanor 21, Marcella 16, Gertrude 12, Henry 9, Gilbert 7 and Beatrice 5. They also afford a young female servant. Anne and Eleanor are both listed as Pupil Governess.

It is unclear when John died but it must have been between the 1891 census and 1898 when Louisa is listed in the electoral register as the only eligible voter in yet another Edinburgh residence – 45 Merchiston Crescent.

We learn from ship’s passenger lists that Marcella travelled the world and was a teacher like her older sisters Annie and Eleanor. She sailed to Cape Town from Southampton on 13th October 1897, aged 24 on SS Goth as a teacher. Later evidence in electoral registers tells us that Gertrude also followed this calling and became a governess. There were female teaching agencies available for young ladies who wished to teach across the British overseas territories , evidenced in previous research into Alice Sherwen.

Marcella is back in Scotland in 1901 , both she and sister Eleanor listed as her companion are visiting 7 Melville Terrace Stirling at the time of the census.

Gertrude, 22, is listed at The Manse, Tillicoultry, Clackmannanshire as a governess for an 8 year old child

Louisa moved again showing on the 1903-04 electoral register at 13 Forbes Rd, Edinburgh and the 1904-05 register at 1 Granville Terrace, showing both times as the tenant and occupier.

In 1906, aged 24, Henry Maurice enlisted and his war service records show that he was in South Africa- Cape Colony, Transvaal and Orange Free State. The same record shows that he resigned his commission on 26th February 1908. He returned to his career in banking which he certainly was engaged in in 1938/39 at Castlebank , Craig Eric, Edinburgh ( Electoral register)

5th July 1913 finds Marcella sailing from Sydney to London on SS Commonwealth, a teacher aged 38. It is unclear when she sailed out to Sydney.

She stayed home a short while before sailing from Glasgow to Montreal on SS Hesperian, teacher on 1st August 1913.

Marcella took up war work at HM Factory Gretna some time between 1916 and 1918. Like many other female teachers from middle class backgrounds she became a Matron at Grace Darling House. She is listed on the valuation roll for 1918-19. She is also listed under staff addresses in the Dornock Farewell Magazine giving an address of 8 Hope Crescent, Edinburgh. The roles of welfare supervisors, matrons, WPS all appealed to women with similar backgrounds to Marcella. She would have been 43.

The only sister who did not follow a teaching career was Beatrice who sadly died in Birmingham on 12th May 1918 aged 32. Her probate lists her as a nurse of 8 Hope Crescent , the same address as Marcella. Probate granted to sister Anne Emily Forbes, teacher also of 8 Hope Crescent. The 1918-1919 electoral register for Edinburgh has Anne listed at 20 Laden Street.

The only sibling not yet accounted for is Gilbert who joined the Black Watch like his father ( Forces war records). We know that he became a clergyman – he is listed in January 1947 sailing from Southampton to New York aged 62, on the Queen Elizabeth. His address is 51 Bishop’s Gate London EC2. There is no evidence that any of the 7 siblings married.

Marcella appears on the electoral register for 1926 and subsequent years at 13 Forbes Road but her mother died at 8 Hope Crescent aged 82 in 1936.

Perhaps she kept a diary of her travels.