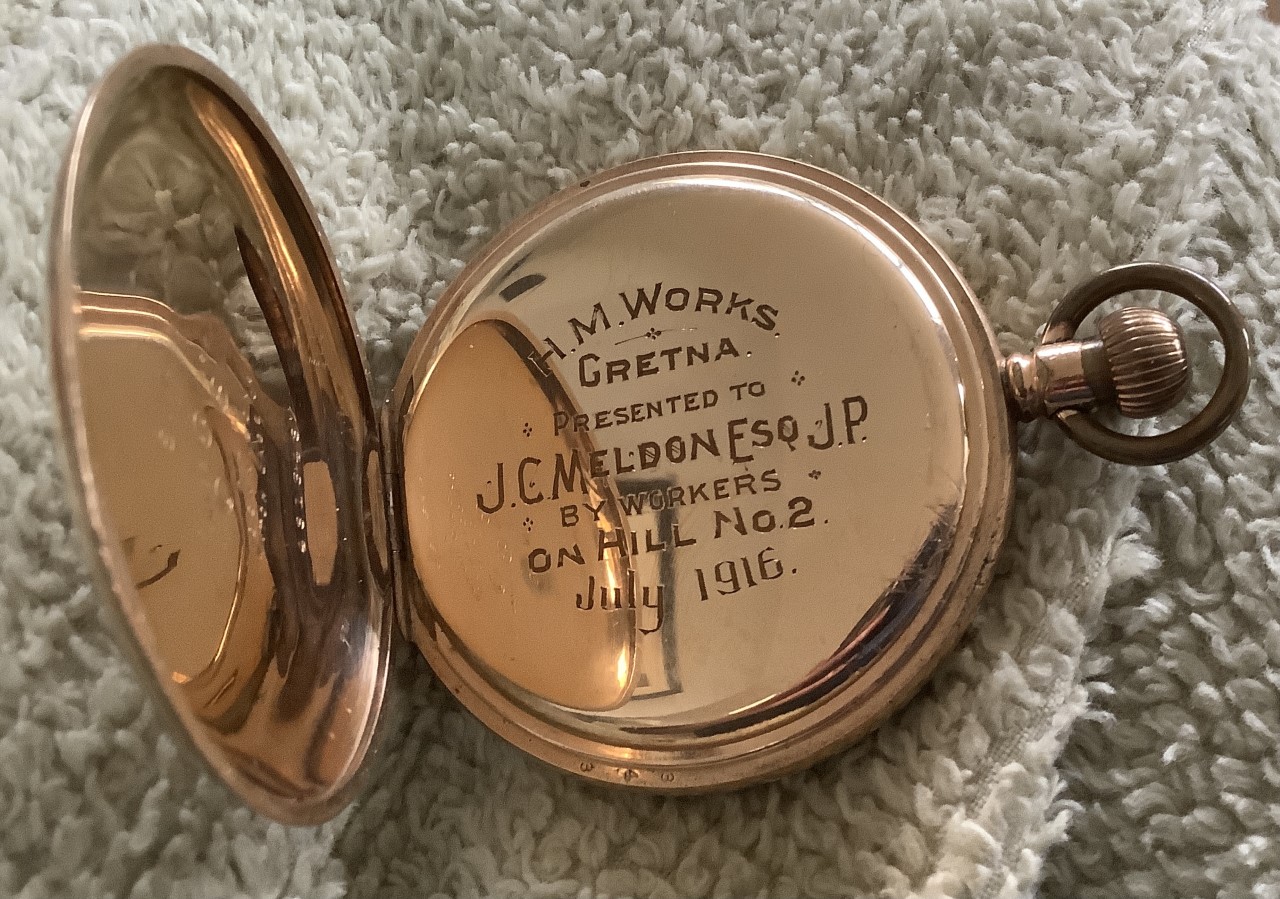 This week’s worker comes from another enquiry from a member of the public, and is a fascinating one! James Charles Meldon was born in Dublin in 1873, the son of Charles Meldon, who was a barrister, nationalist politician, and M.P. for Kildare.

The Meldon family has an impressive national pedigree.[1] Meldon is a variation of Muldoon, or in Irish, Ó Maoldúin, which means ‘descendant of the servant of St. Duin.’ The Ó Maoldúin’s were rumoured to be of royal descent, they were styled as the kings of Lurg in ‘The Annuals of Loch Ce’, which chronicles Irish affairs from 1014-1590. However, the Ó Maoldúin clan was defeated in battle by the MacGuires in about 1400, losing most of their power, although they retained some of it in Ulster. Remember this family information, it is definitely important to James Charles Meldon’s story!

In 1894, James married Harriette Cololough in St Joseph’s Church, Kingstown.[2] By 1901, the Meldon’s were living in Wellington Road, Dublin, alongside two of James’ sisters, their four-year old daughter Eileen, and two servants.[3] From this glimpse into the Meldon family at the time, it appears the family are living a comfortable middle-class life. It’s in the 1901 census we also get the first mention of James Charles’ job: an electrical engineer. This was a relatively new profession—the first electrical engineer is generally considered to be Sir Francis Ronalds, who created the first working telegraph that operated over a substantial distance.[4] 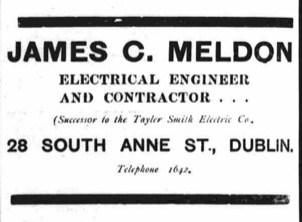 James advertised his business in local papers, and it appears that he was very successful. By 1911, he’d left Dublin to live in Greystones, Wicklow. In 1912, he was involved in the town of Dundalk’s switch to electric lights; his shop there was described as a ‘veritable fairyland of brilliant light.’[5] In 1917, he was the consulting engineer at the at The New Picture House, Greystones.

But what was James Charles Meldon’s connection with H. M. Factory Gretna? Well, that’s still a little bit of a mystery. The Devil’s Porridge Museum was recently approached by a member of the public who had in their possession a beautiful presentation gift given to J. C. Meldon ‘by workers on Hill No. 2’ at H.M Factory Gretna in July 1916. 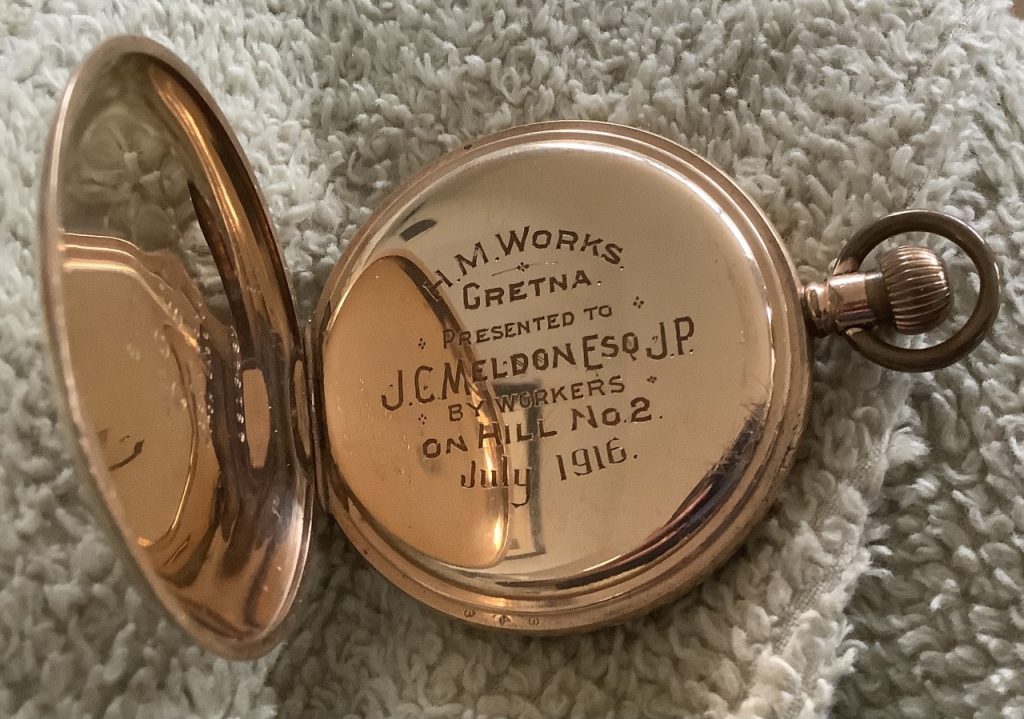 It was common for presentations to be made to fellow workers, or bosses when they were leaving and/or when they performed particularly meritoriously at their job. In the DPM’s collection, we have a silver platter given to a William McDonald as well as a souvenir given to J. C. Burnham. ‘The Hill’ mentioned is shorthand for the Nitro-Glycerine Hill, which was where Nitro-Glycerine (a crucial ingredient needed to make cordite) was fed into the cordite making process by gravity. This suggests that J. C. Meldon was involved, in some way, in this particular area of the factory. The date engraved on the watch also gives us some more clues about Meldon’s time at the Factory. July 1916 was not long after the factory started production. Coupled with his career as an electrical engineer, could Meldon have been involved in the construction of the factory, perhaps installing electrics? The ‘JP’ at the end of Meldon’s name stands for Justice of the Peace. A Justice of the Peace is a judicial officer, appointed from the local community, who sits in the magistrates court and decides on minor offences. J. C. Meldon was appointed a JP of the city of Dublin in January 1915.[6] Although this was a lay position, which is a position that doesn’t require legal training, in a way J. C. Meldon was following in the footsteps of his father, who was a lawyer, by becoming a Justice of the Peace

On the other side of the watch, Meldon’s illustrious family history is celebrated. 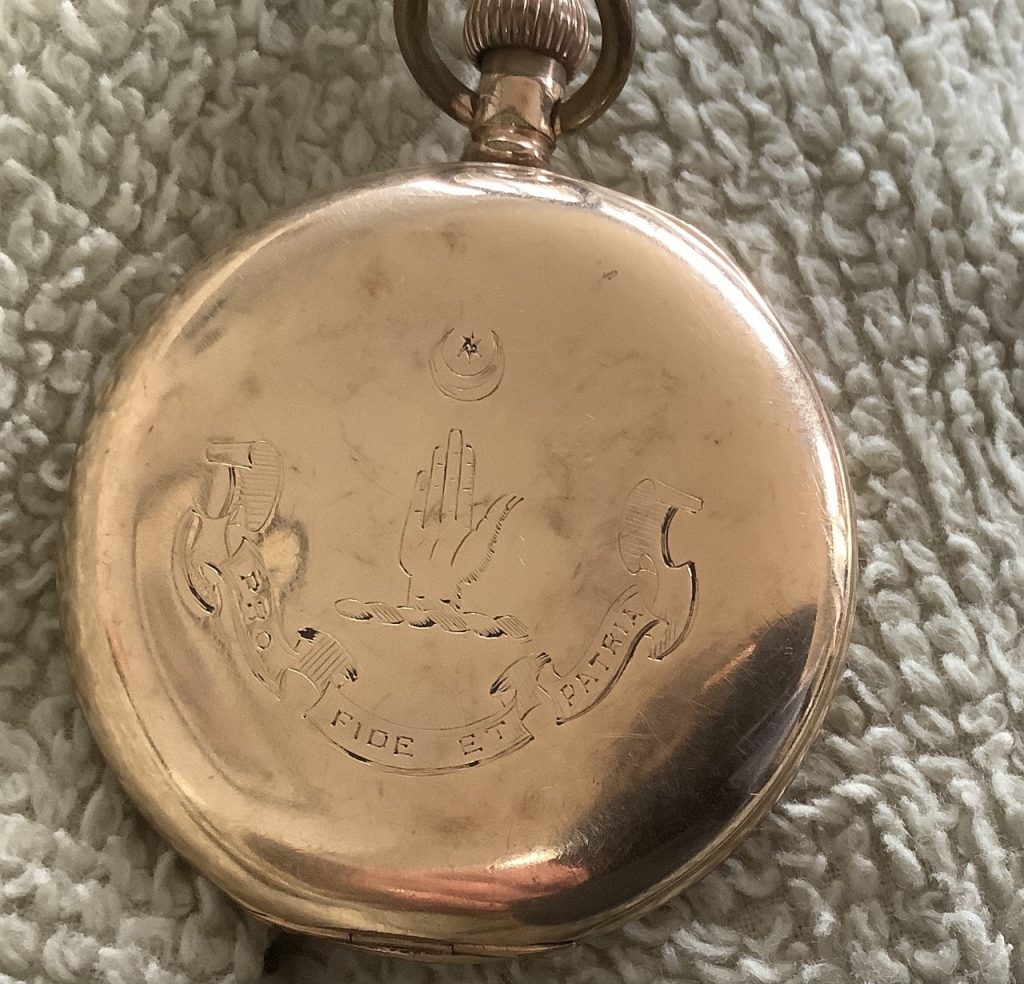 This is the Meldon family Crest and motto. The motto, pro fide et patria, is Latin for ‘For Faith and Fatherland.’[7] The coat of arms is a variation of the Muldoon coat of arms.[8] The hand is a symbol for faith sincerity and justice, and the crescent moon above it is a symbol of one who has been honoured by his Sovereign.

When we recently shared photos of this lovely gift across our social media, and received the following information from a Facebook follower:

It’s a half hunter Waltham watch. American manufacture, retailed by Stokes of Dublin. The serial number will give the date of manufacture, probably 1915/16. Could be 15 carot gold case. Or possibly gold plated can’t see the marks on the cover clearly.

That is all we’ve been able to uncover about J. C. Meldon’s time at H. M. Factory Gretna, and the lovely presentation gift given to him from workers there. Whilst we don’t know the details of Meldon’s involvement with the factory, the gift, coupled with his job as an electric engineer, suggests that he was involved in some way with the construction of the factory. His family background and historic connections to Irish royalty make J. C. Meldon’s connection with Gretna even more fascinating, and we wouldn’t know any of this without the help of the member of the public that reached out to us to share photos of the watch! So, a massive thank you, and do feel free to reach out to us if you know of any connections with H. M. Factory Gretna in your family history!