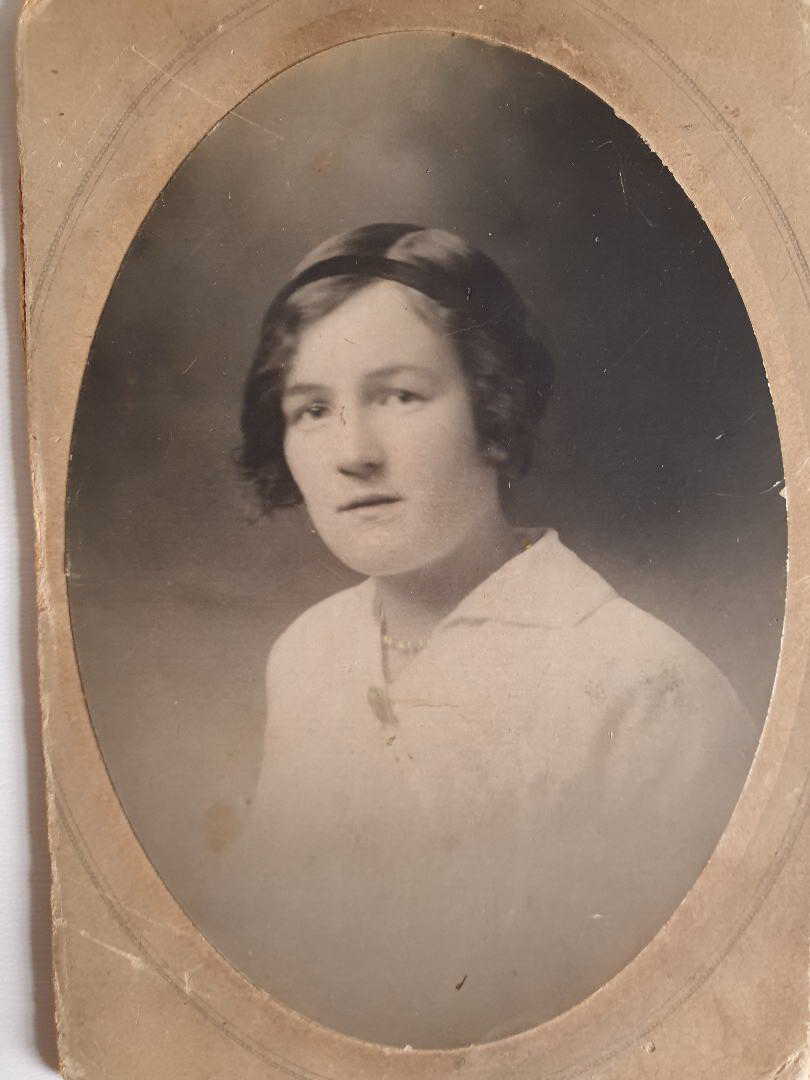 Worker of the Week is a weekly blogpost series which will highlight one of the workers at H.M. Gretna our volunteers have researched for The Miracle Workers Project. This is an exciting project that aims to centralise all of the 30,000 people who worked at Gretna during World War One. If you want to find out more, or if you’d like to get involved in the project, please email laura@devilsporridge.org.uk. This week, volunteer Catriona Banks, tells us all about her grandmother, Mary Gerrie Esson.

Mary was the fourth child born to Alexander Esson (9 July 1858 – 28 June 1945), a butcher in Aberdeen, and Margaret Crofts (25 Mar 1866 – ? poss Sydney, Australia) from Whalsay, Shetland. Alexander and Margaret (Maggie) were married in Aberdeen on 21 Nov 1890, and had eight children in total, two boys and six girls. Tragically, both boys were killed in WW1, and three of the girls died as babies.

Mary lived in Aberdeen and from the uniform she is wearing in the photograph below, it is likely she attended St Margaret’s School for Girls on Albyn Place. The photo shows Mary and her classmates doing a Physical Education class in 1909 or 1910, when Mary would have been 12 or 13 years old. 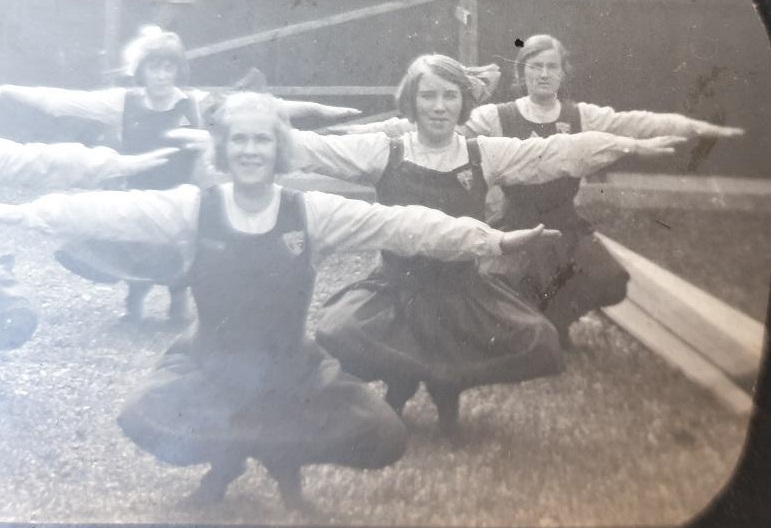 The census of 1911 reveals that Mary, then aged 14 years, had left school and was working at the Paper Mills but her job is illegible [‘? sorter’, perhaps].

By 1916, Mary was working at the Munitions Factory in Gretna. She would have been twenty years old. She was given a triangular-shaped brass badge in acknowledgement of her war work. 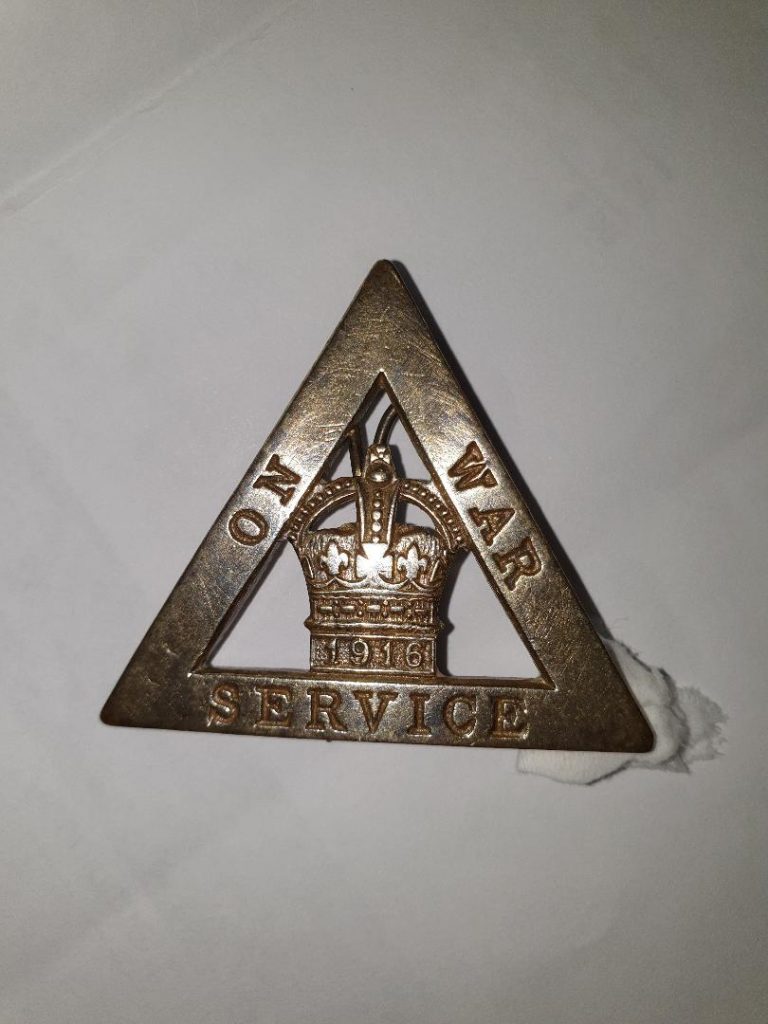 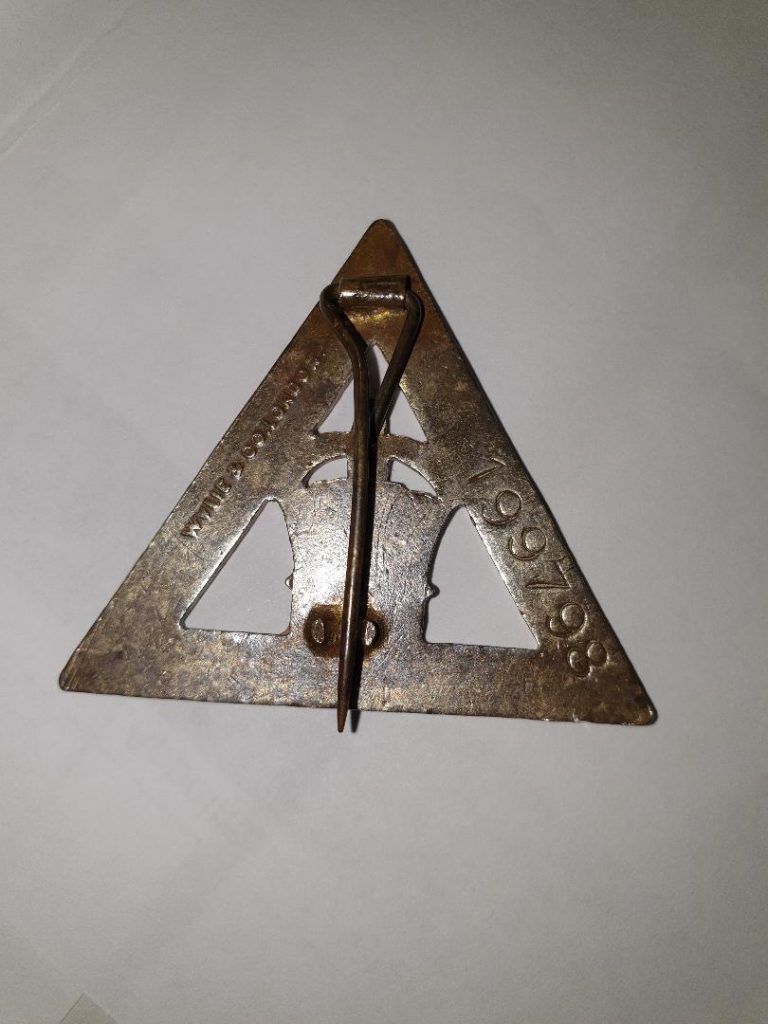 Mary sent a postcard to her mother, Maggie, in 1917, posing in her munitions factory uniform. The back of the card reads: ‘With Love from Mary to Mother. 24.4.17. D.E.S. H.M Factory. Gretna’ 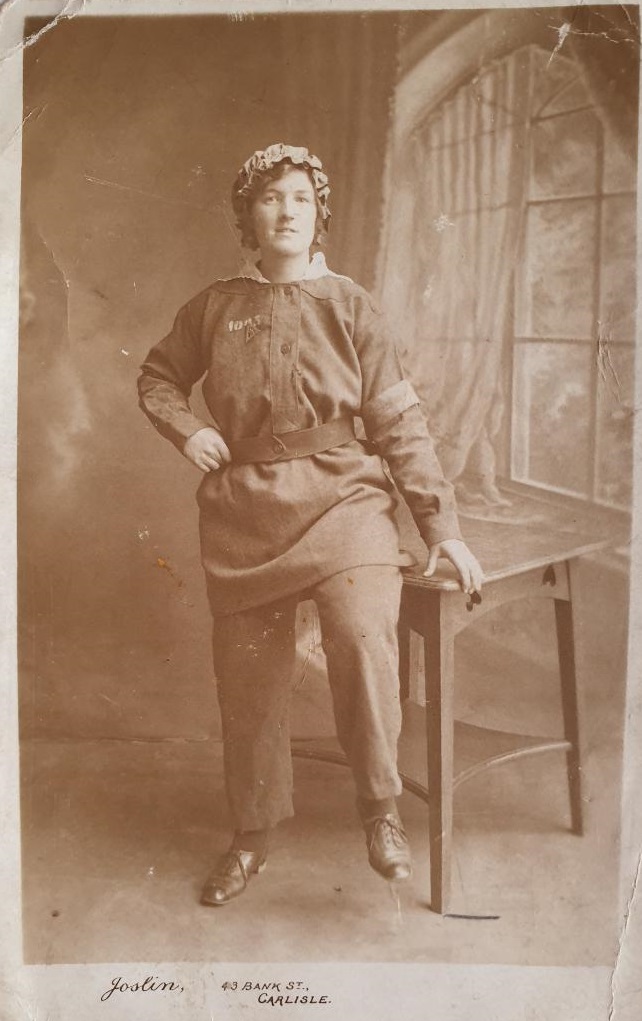 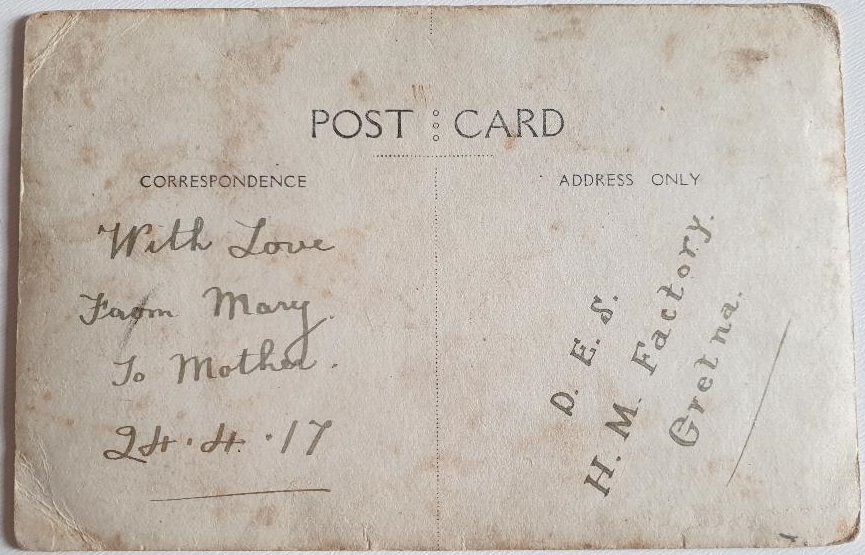 Meanwhile, Mary’s older brother, James Ross Esson, had joined the City of Aberdeen Brigade of the Royal Field Artillery (RFA) when it formed in the spring of 1915. His service number was L/4402, and his rank was Driver. He found himself in Salonika in the midst of the Balkans campaign, and was tragically severely wounded in action. He later died of his wounds on 20 February, 1917. The Aberdeen Evening Express newspaper of Friday 2 March, 1917 reported on James’ death: 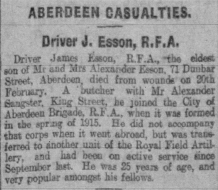 The following day, the same newspaper listed James Esson on their Roll of Honour. They noted that he was the ‘Dearly loved and deeply regretted’ eldest son of Mr and Mrs Alexander Esson, 71 Dunbar Street.

The youngest of the family, Alexander, also enlisted for service in WW1 and joined the Gordon Highlanders. He was a Lance Corporal in the 6th Battalion, service number S/22581. He must have been only 17 when he initially signed up, possibly prompted by the death of his older brother? In any case, Alexander was in that cohort of new recruits flung together and sent to defend the Somme at the Lys River in what became known as the Fourth Battle of the Somme, which occurred between 9- 29 April, 1918. Alexander was killed in action on 11 April, 1918. He was 18 years old.

Alexander’s body was never found. He is remembered at the Loos Memorial in Pas de Calais, France. 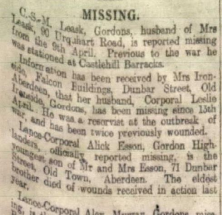 On 7 May, 1920, Mary married Charles Gordon Sellar Banks (14 Dec 1895-25 Jul 1936) at The Manse in Old Aberdeen. In 1914, Charles had joined the Royal Naval Division and served at Gallipoli where he was wounded and invalided off the Peninsula, and then in France where he suffered gas exposure which left him with permanent damage to his lungs. At the time of their marriage, Charles was an Apprentice Cabinetmaker, aged 24, living at 234 Holburn Street. Mary was a 23 year old Laundry Worker, living with her family at 71 Dunbar Street.

The first of Mary and Charles’ children, a daughter, Aileen Esson, was born on 27 November 1920 in Aberdeen. The story that was told as I grew up was that Charles’ lungs were so bad that doctors recommended a warm, dry climate. So, in January 1925, the small family relocated to Auckland, New Zealand where they spent several years. My father, Charles Gordon Esson (known by his family as Gordon) was born in Auckland on 20 December, 1929. His birth certificate notes that there was another boy born to Mary and Charles in the years between Aileen and Gordon, but he had died at birth. As the years passed, Charles’ health became progressively worse, and as he realised he was going to die, he wanted to die back in Scotland. So, the family of four returned to Aberdeen in May 1933 aboard the Rangitane from Wellington, New Zealand – Aileen was 12 years old, and Gordon was three. Charles Gordon Sellar Banks died on 25 July, 1936 aged 40 years, succumbing to acute asthma. He is buried in the Nellfield Cemetery, Aberdeen.

Mary applied for a war widow’s pension, but her application was denied. One can only imagine what a difficult time this must have been for a young widow with two children to support in a post-war United Kingdom. What a bitter blow to have lost your husband whose health was fatally compromised due to his involvement in the war, and not be granted a war widow’s pension. 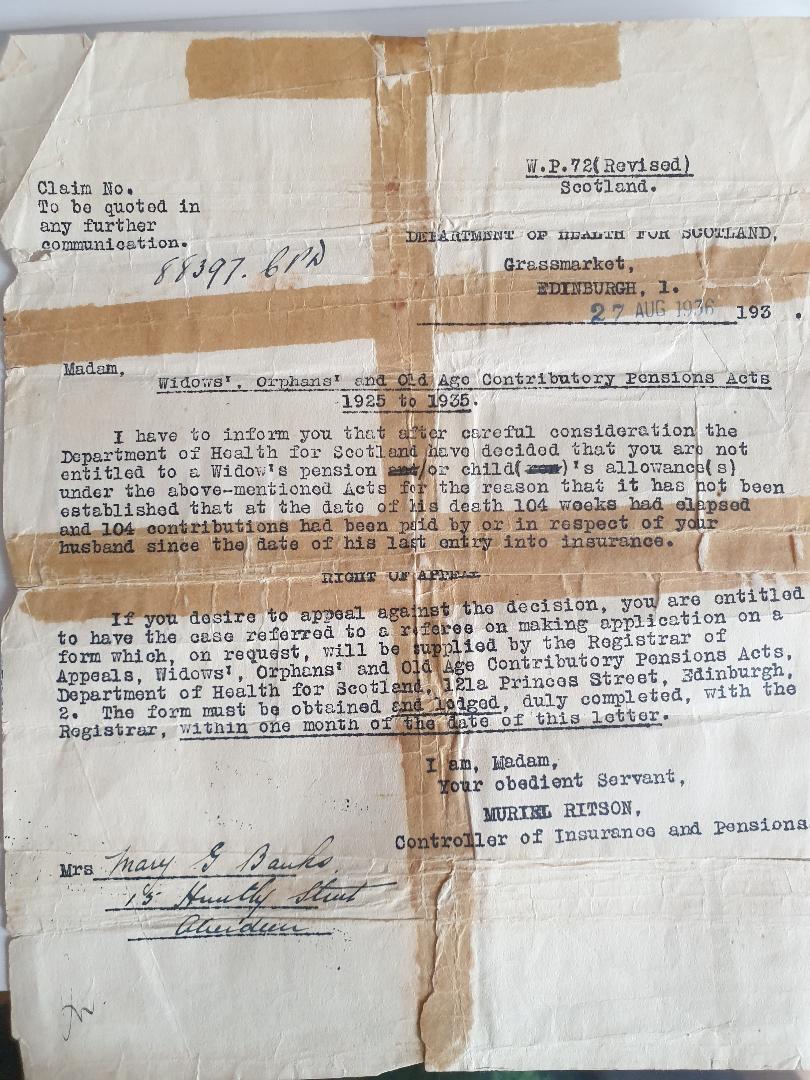 In 1939, with a second World War brewing in Europe, Mary decided to migrate permanently to New Zealand. Shipping records show that Mary, aged 42, Aileen, aged 18, and Gordon, aged 9 sailed on the Orontes from London to Sydney, disembarking on 14 February, 1939. While the ship itself was due to sail to New Zealand, the industrious Mary left Aileen looking after her young brother at Circular Quay and managed to secure accommodation for them all (at the Salvation Army hostel, 140 Elizabeth Street, Sydney) and a job for herself as a seamstress. And so, the family’s plans changed, and they ended up settling in Australia. 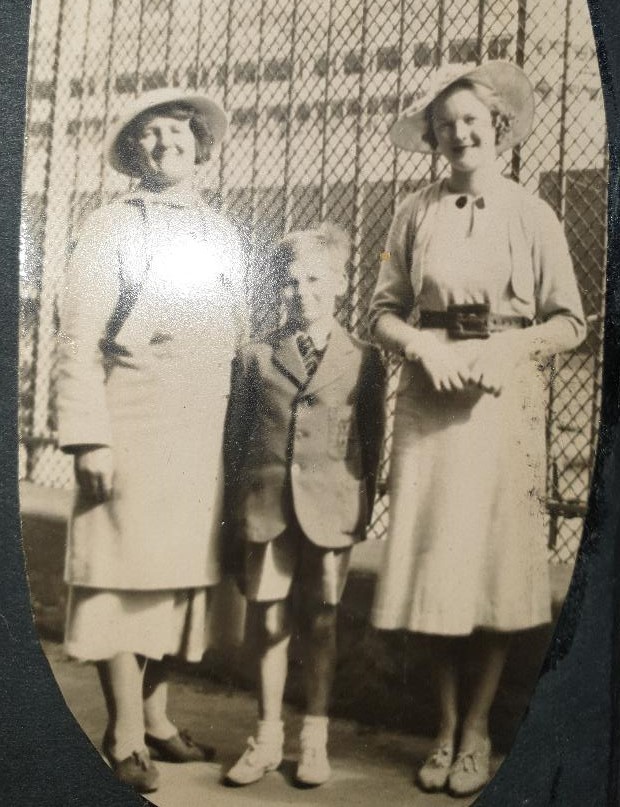 Aboard the Orontes, February 1939.

They stayed only a few years in Sydney before moving once more, this time to Melbourne. Gordon (now known as Charles) went to boarding school in the rural town of Kilmore, attending Assumption College on a scholarship. Charles was a brilliant student and school records show that the College followed his academic and professional career for many years after he had finished Matriculation.

Interestingly, Assumption College Kilmore is a Catholic school run (in those days) by the Marist Brothers. It was around this time (c.1941) that Mary, Aileen and Charles converted to Catholicism from Presbyterianism. Charles talked about it in terms of expediency – the family were befriended

by the Headmaster of Assumption College who suggested that it would help their case for a scholarship if they were Catholic. So, the family were baptised at St Mary’s Cathedral in Sydney before their move to Melbourne.

The electoral roll of 1942 shows that Mary and Aileen were living at 12 Lorna Street, Moonee Ponds, an inner-western suburb of Melbourne. At the time it was a fairly industrial area, dominated by a huge munitions factory on the nearby Maribyrnong River. Both Mary (aged 46) and Aileen (aged 22) were listed as munitions workers at the Maribyrnong Ammunition Factory. I am not sure what type of work they did at the factory, nor how long they worked there, but I assume they both wanted to do their bit for the war effort, given the involvement of so many of their family members in World War I.

By 1949 Mary and Aileen had moved from Moonee Ponds to the eastern suburbs of Melbourne, settling eventually at 1 Avenue Athol, Canterbury. In the electoral roll of 1954 Mary’s occupation was listed as Home Duties. As she was only 58 years of age, and had always been an energetic, intrepid person, I wonder if her health had begun to decline. Mary Gerrie Esson Banks died at the age of 68 on 18 November 1964. Her death certificate states that she succumbed to stomach and liver cancer. She is buried at the Box Hill Cemetery. The inscription reads: ‘In loving memory of Mary Esson Banks. Died 18th Nov 1964. Beloved wife of the late Charles Gordon Banks of Aberdeen Scotland. Devoted mother of Aileen and Charles’. 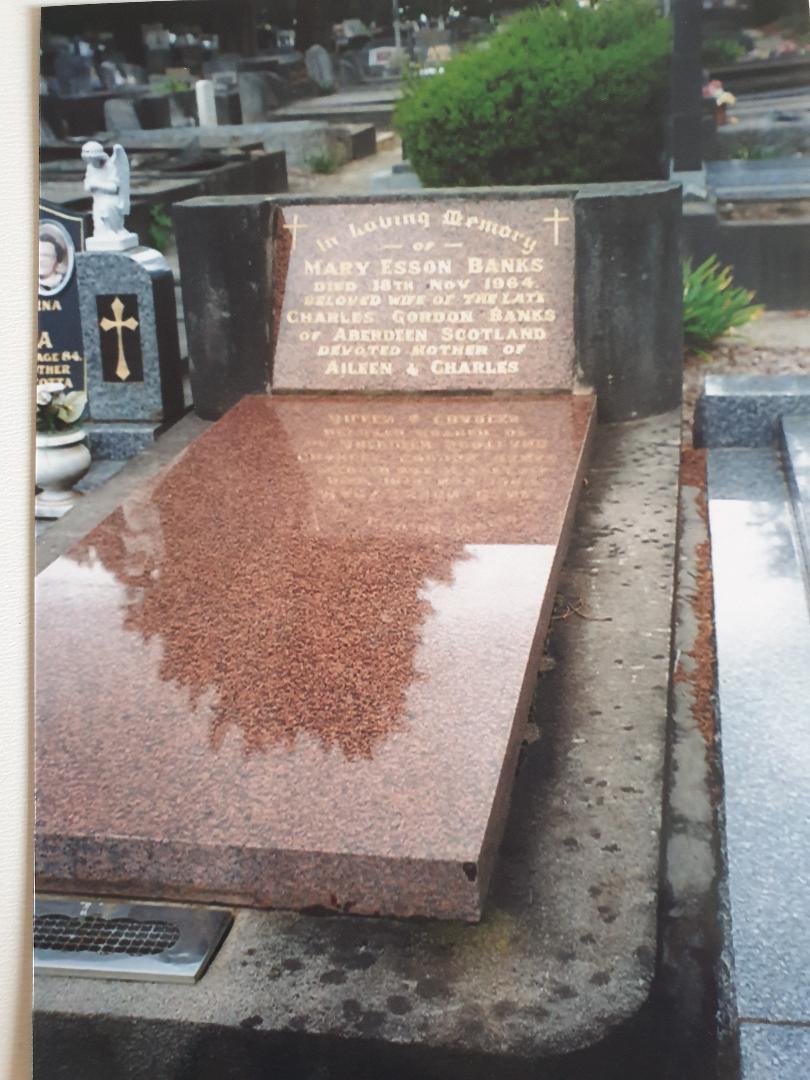